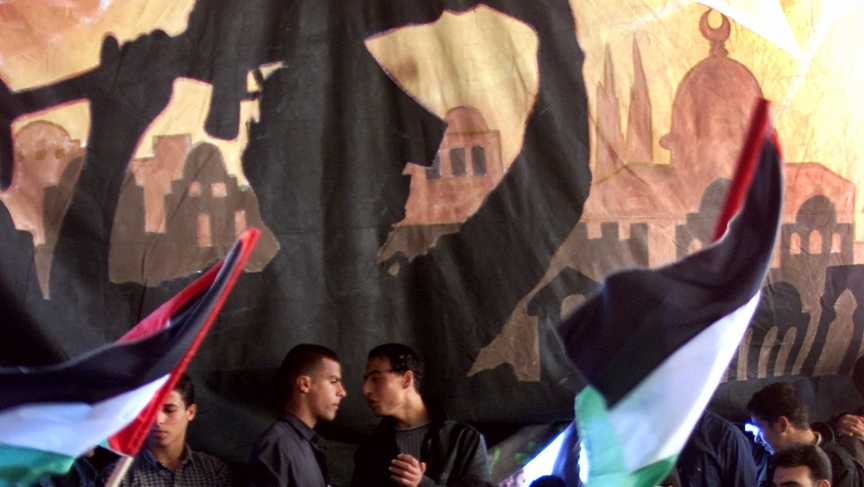 Critics complain that Al Quds administrators condone demonstrations like this one - which can include violent imagery, masked demonstrators carrying fake weapons and posters depicting suicide bombers - even while they crack down on academic freedom.

A Palestinian professor took Palestinian university students on an unprecedented trip to the Auschwitz concentration camp memorial in March, in an effort to break Palestinian taboos surrounding the Holocaust.

But when the group got back, there was uproar. Students demonstrated, the professor got death threats, the university distanced itself from the trip and other teachers kicked him out of the professors’ union.

Mohammed Dajani’s trip to Auschwitz was part of a project with Israeli universities, which also took Israeli students to meet Palestinian refugees. Dajani said he and his colleagues were researching how those kinds of encounters might create empathy for the opposite side’s suffering.

Dajani says he didn’t break any university rules because the trip was unaffiliated with the school, and that he’s not even a member of the union that kicked him out. But the message sent by other professors, he said, is loud and clear.

“I think it was meant to insult. It was meant to humiliate,” Dajani said. “They want to set me as an example in order for people to be afraid to actually think in terms of dialogue with other, or in terms of reconciliation with the other.”

Al Quds University used to be different. It hosted dozens of joint projects with Israeli universities, but in 2008, citing an unending barrage of rocket fire, Israel declared war on Gaza, Palestinian civilians were killed, and the university said no to any new initiatives with Israelis. Other Palestinian universities also shun cooperation with Israeli academics.

The boycott is part of a larger movement in Palestinian society against what’s called “normalization” – collaborating with Israelis as if there’s no conflict and relations are normal.

“Israel has one of the best academic environments in the world, and just nearby, there are several universities that are craving more support in academia – lectures, scientific collaborators, and so forth,” Winters said. “These are being denied from them, and I think it’s unfair.”

Winters said the ban on working with Israeli academics bolsters those Israelis who say Israel doesn’t have a partner for peace. “They come up and say, ‘They won’t even collaborate with you. How can we reach a peace agreement with these people?’”

Israelis point to something else they find troubling: While professors like Dajani are denounced, the university has condoned student rallies like one last November with masked demonstrators carrying fake weapons next to posters depicting suicide bombers.

“Whoever sells out his own people is a traitor,” went the lyrics to a song played at the rally. The demonstration led Brandeis University in Massachusetts, to suspend its own partnership with Al Quds. Another demonstration like this also happened a few months ago.

“We are representing all levels and all sectors of the Palestinian society. So we have (Islamic) Jihad, we have the Islamic movement, we have the Fatah movement,” said Al Quds’ incoming president, Imad Abu Kishek, defending the rallies. “We are creating environment of democracy.”

Abu Kishek said all Palestinian political views are welcome on campus, but Professor Dajani said professors who believe in joint projects with Israelis are learning that their views are not wanted.

“Now they are seeing what’s happening with me, and they are worried if they will be the next target,” Dajani said.

A dean at the university was attacked and beaten recently because he runs a joint initiative with an Israeli university, said Dajani. The longtime Al Quds president, Sari Nusseibeh, was also attacked once for his pro-peace stance. He is leaving his post.

Now the question is if will Dajani stay. Because of all the controversy, he submitted his resignation. But the incoming university president said he doesn’t want Dajani to go, and neither does Dajani.

“I have actually already received offers to teach abroad, but I don’t want to do that, because there is a need for me here much more than any other place,” Dajani said. “I can see the impact on my students, and how it changed the way they feel and the way they think, and their behavior, and becoming more positive elements in society.”

Dajani said he wants university officials to publicly reject his resignation, to send a strong signal of support for his freedom of expression.

He said if he doesn’t hear back by Sunday, he’ll leave. He awaits their decision.