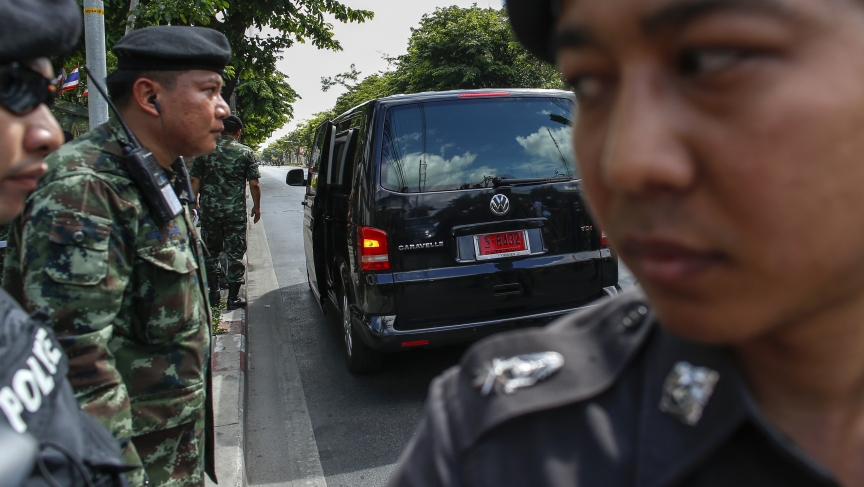 A van believed to be carrying Thailand's interim Prime Minister Niwatthamrong Boonsongphaisan arrives at an army facility after being summoned by the army during a coup in Bangkok May 23, 2014. Thai army chief Prayuth Chan-ocha summoned ousted Prime Minister Yingluck Shinawatra to a meeting on Friday.

Last week, Thailand's prime minister, Yingluck Shinawatra, was forced from power, the victim  of a "corruption investigation" that may have been more about politics than corruption.

This week, as a military coup unfolds in the country, she was arrested and taken to an army camp. The army says she — and her sister and brother-in-law — wouldn't be held for longer than a week. The Guardian reports on the Thai military's effort to round up politicians as it seeks to consolidate its power over the country.

Lawyer and former Harvard Law professor David J. Barron was confirmed to the US Court of Appeals this week — in a strange political deal.

Barron was the author of a top secret government memo justifying the killing of Americans abroad, without trial or judicial proceeding, so long as those targeted posed an iminent threat to other Americans. The New York Times and the ACLU have been battling for years to get access to that memo — a memo that Obama and others in his administration have repeatedly mentioned.

A court ruled it had to be released, but the Obama administration planned to appeal. Now the administration has dropped its appeal, in exchange for the Senate confirming Barron's nomination. The New Yorker looks at how Barron came to write the memo, and how this compromise played out.

What about Christian charity and forgiveness?

Pope Francis has been widely hailed for his efforts to reach out to discontented factions of the Catholic Church. But as he heads to the Holy Land this weekend, he'll face one of his bigger challenges: trying to heal rifts with other Christian faiths.

He'll try to do that at a meeting in the Church of the Holy Sepulchre — revered by most Christians as the spot where Jesus was crucified, buried and resurrected. It's an interesting choice of location since six different Christian faiths have a stake in the church — and have been arguing over the site for centuries. PRI's The World has the story.

Some may still deny climate change, but not the credit agencies

Climate change has been in the news a lot lately, blamed for melting Antarctic ice sheets and record-breaking rain in the Balkans. But now the global insurance and credit rating agencies are getting in on the act.

In reports issued this week, Standard & Poor’s and Munich Re have attempted to quantify the costs associated with climate change. Quartz looks at those nations most and least vulnerable to climate change, and at how much more insurers are spending on meteorological and related disasters than ever before — a pattern that first emerged in the 1980s.

Your fruit salad just got a lot less appetizing

PRI's Living on Earth looks at the use of pesticides in produce — and just how hard it is to wash them off. In fact, some of the most popular fruits out there — apples, strawberries, grapes — are coated with trace amount of pesticides and other chemicals you just can't wash off, no matter how hard you try.

Those trace chemicals are probably not going to kill you, but the cumulative effect of this exposure is only now starting to be understood. Even buying organic may not help.

If you live in North America, you may be seeing some turbulence this weekend — in space. Friday and Saturday night, the Camelopardalid Meteor Shower will make its first appearance from Earth. Because it's the first time we'll see it, we don't know how big of a deal it will be. It could shower the night sky with 100 meteors per hour, or it could be as much as 1000 meteors per hour. NASA has created a Facebook event with details of the best times to see the meteor shower in different time zones.