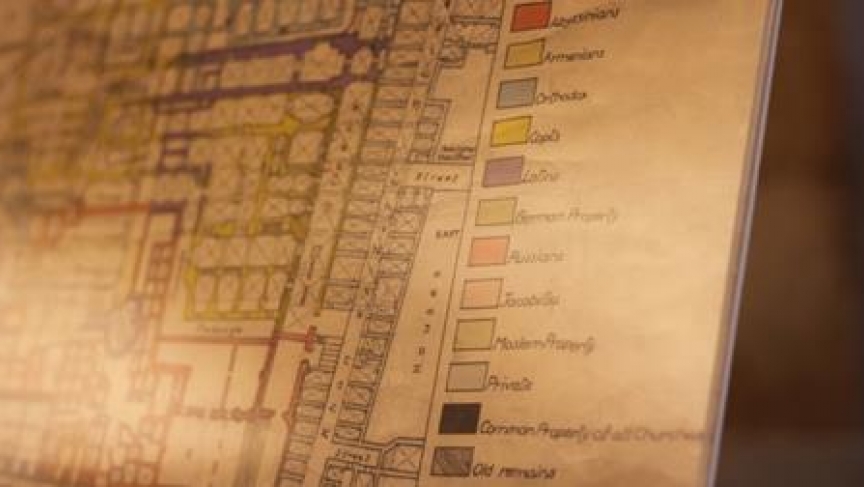 A 19th century German missionary built a model of the Church of the Holy Sepulcher, color coded to indicate which areas belonged to which community.

The Church of the Holy Sepulchre is revered by most Christians as the spot where Jesus was crucified, buried and resurrected. But for the six different Christian denominations that pray here, that’s where the agreement ends.

The church is run on an arcane set of rules that govern every tiny thing, like who rings the church bells first. Each denomination takes its turn and they rotate the order.

“It’s hard to compromise when it comes to the holiest place in the world,” said Hana Bendcowski, an Israeli interfaith activist and tour guide who spends a lot of time at the church. She works with the different Christian denominations that share it.

“It’s not that they don’t have the fantasy to have the whole church to themselves one day,” Bendcowski said. “But they know that it’s impossible, and the only way for them to survive there and work there together is by respecting each other.”

That respect doesn’t always hold up. The different denominations have been known to fight with each other — actual fisticuffs. The last major brawl was in 2008, between Armenian and Greek Orthodox clergy during a processional, when Armenians said a Greek monk was interfering.

Father Samuel Aghoyan, 73, the Armenian superior at the Holy Sepulchre, was one of the guys throwing punches in the last big fight — but he laughs about all of the disputes.

“It shouldn’t happen to begin with, as Christians,” said Father Samuel. “See, having possession of something in the holy places, it gives you some kind of pride. ‘Hey, I am the owner of this Holy Land. I have the right to stay here and keep my existence.’”

The various Christian denominations have clashed over territory in this church for centuries.

About 160 years ago, the Ottoman Muslim authorities in the Holy Land imposed a kind of ceasefire, demanding that any change in the church had to be by consensus. The pact outlines in painstaking detail who owns every chapel, every lamp and every bit of floor space.

There are still unresolved disputes. The Armenian Orthodox own a small cavernous chapel in the back of the church, but the Syrian Orthodox also claim it.

“They have a right to use the place. They don’t have any possession of the place. There’s a great difference,” said Father Samuel, the Armenian superior, with a laugh. “I laugh all the time because it’s funny.”

So why doesn’t he try to end the dispute?

Other denominations also acknowledge the folly. An official with the Greek Orthodox Patriarchate called the whole arrangement “silly.” Franciscan Catholic Father Athanasius Macora, a native of Austin, Texas who sits on the negotiation team that meets when there are disputes, said it’s important for Christian groups to defend their access and rights in the church, but he thinks it’s not worth all the bickering.

“If you come back in 200 years, probably the situation of the church won’t be significantly different than it is now,” he said. “So what’s the point in fighting over little things?”

There’s incredible diversity inside the walls of the Church of the Holy Sepulchre — liturgy sung in various languages by different clergy in different-colored dress.

But the Christian population in the Holy Land is dwindling. Christians are now just 2 percent of the population.

Father Athanasius said he thinks for all the warring between them, the most important thing is that the different Christian communities stay put — to strengthen the Christian presence in the Holy Land.