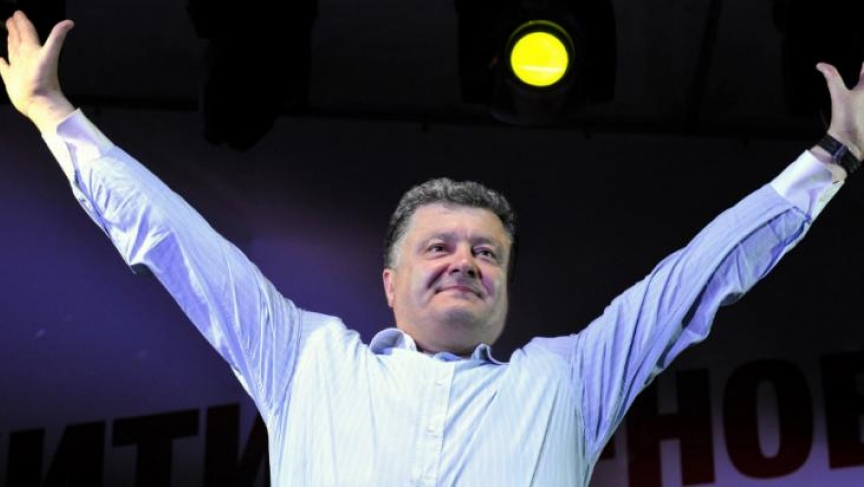 Ukrainian businessman, politician and presidential candidate, Petro Poroshenko, on the stump earlier this week, is the frontrunner in the upcoming election.

Ukraine’s dramatic political saga is going into a new chapter.

The divided nation is holding a presidential election on Sunday. It’s the first election since the ouster of President Viktor Yanukovych in February. All observers agree the poll is critical to establishing the legitimacy of the interim government in Kiev.

But it’s not clear if voting will take place in the two eastern provinces of Donetsk and Luhansk, which are dominated by pro-Russian separatists who held a referendum two weeks ago on independence.

“Obviously some people feel that they are independent now,” says the BBC’s David Stern in Kiev, “and they will not go to the polls.”

Stern adds that “the separatists say they do not recognize, and will not allow, the elections. But there are large number of people who do support the government in Kiev, or at least a united Ukraine. That’s what all the opinion polls have shown. And so the question is how many polling stations will actually be operable.”

Violence in the east has escalated in the week before the polls, with dozens killed in military clashes.

Ukraine and western nations, including the US, accuse Russia of stirring the unrest in Ukraine, or even of orchestrating it. But on Friday, Russian President Vladimir Putin issued a relatively conciliatory statement, hinting he might recognize Sunday’s election.

The front-runner in the election is Petro Poroshenko. He’s an established politician and a billionaire business tycoon — one of the richest men in the country. He made his money in multiple enterprises, but mainly by selling chocolate. Hence, his nickname as the "Chocolate King" or the "Confectionary King."

“He’s not quite Willy Wonka,” chuckles Stern. “Willy Wonka was a recluse, if I remember the book, and a very eccentric man.” Neither of those descriptions fit Poroshenko.

Poroshenko is seen as a pragmatic politician. In fact, says the BBC’s Stern, “he’s been part of any number of parties.” He has served as a minister in various governments, including the government of the ousted Viktor Yanukovych. He is currently seen, according to Stern, as a leading figure in the pro-European movement in Ukraine. But some also say Putin sees him as someone he can do business with.

For all those reasons, some Ukrainians are suspicious of Poroshenko. The protesters still occupying Kiev’s Maidan Square have said they will be watching him closely.