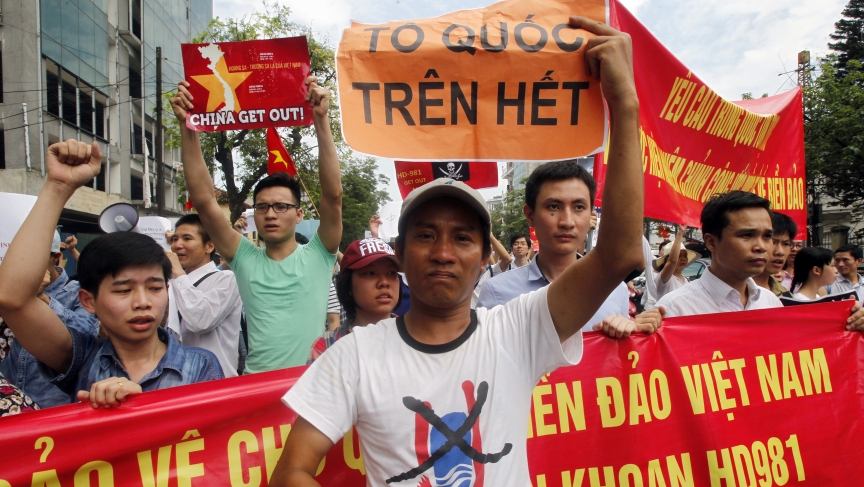 A protester holds a placard reading "nation first" during an anti-China protest in Hanoi to denounce China's setting up of a giant oil rig in the South China Sea.

There's standing up for yourself. And then there's picking a fight you're likely to lose.

But Vietnamese don't seem to care.

They're fuming about China's decision to set up an oil rig in a nearby area of the contested South China Sea, close to the Paracel Islands, which are controlled by China but claimed by Hanoi.

Hanoi sent a flotilla of ships to the area, some of which have reportedly rammed Chinese ships sent along with the oil rig as protection.

On Vietnamese social media, at protest rallies, in classrooms and cafes, the confrontation has become a huge topic of debate, especially in the capital city, Hanoi.

It’s pretty easy to find people who have something to say about the situation. But not so easy to find someone who’ll say it for the record.

At a busy sidewalk beer spot, Phuong Thi Thinh needs a few sips before she’s ready to get real.

“A lot of people have been discussing this issue on Facebook,” she said. “And many of them are furious. They show a very clear hatred toward the Chinese government, and some of them are even talking about fighting against China. I agree with how people are reacting. They have a right to be furious.”

Pages are filling up with vitriol aimed squarely at the Chinese government. Folks are posting patriotic images of Vietnamese soldiers, strapped and ready for battle. There are the “China - Get out!” banners. And endless comment strings crammed with earnest patriotism, finger-wagging history lessons and genuine fear.

Vietnamese folks have a lot to say about this conflict.

Some of Tu Vu Tho’s friends are so angry with China, they’re talking about a potential fight.

“My friends and I, we are watching the news every second of the day to see what’s happening,” Tho said. “And some people are so enthusiastic that they talk about volunteering to protect our islands and seas.”

Now, this whole thing with the Chinese oil rig is going down almost 150 miles offshore. But the way folks like Tho are talking, it would be easy to think there was an iminent threat to mainland Vietnam.

“It’s hard for me to explain why Vietnamese people are reacting this way, because I feel it’s a very natural reaction. When someone invades your house, you have to show that you are the owner, and you are not letting them do that to you or your house,” he said.

Dang Than, a Vietnamese novelist and poet, said while the Paracel and Spratly islands are officially considered disputed territory, for the Vietnamese, they're their turf.

“All the people here are very sensitive to anything relating to border or territory,” Than said.

That’s because Vietnam’s relationship with Beijing has long been fraught; lots of wars over the past few centuries. So it’s not so shocking that some folks here see China’s oil rig throw-down as a bully move.

So the question keeps coming up: will there be war? Dang doesn’t want a fight. But he says the way for Vietnam to avoid an armed conflict isn’t by backing down.

But whether or not China backs down, people like Phuong Thi Nguyen say they’re not intimidated by their neighbor’s military might.

At a Mother’s Day party, Nguyen and her girlfriends talked about the prospect of war.

“Nobody really wants this to happen,” she said, “not the government or regular people like us. But if it does happen, I’m ready. Maybe not directly, but indirectly. If my husband and my family have to join the army, I support them 100 percent."

But despite the bravado, like all of the other wives and moms at this table — like most of Vietnam — Nguyen hopes no one in her house is ever called up.