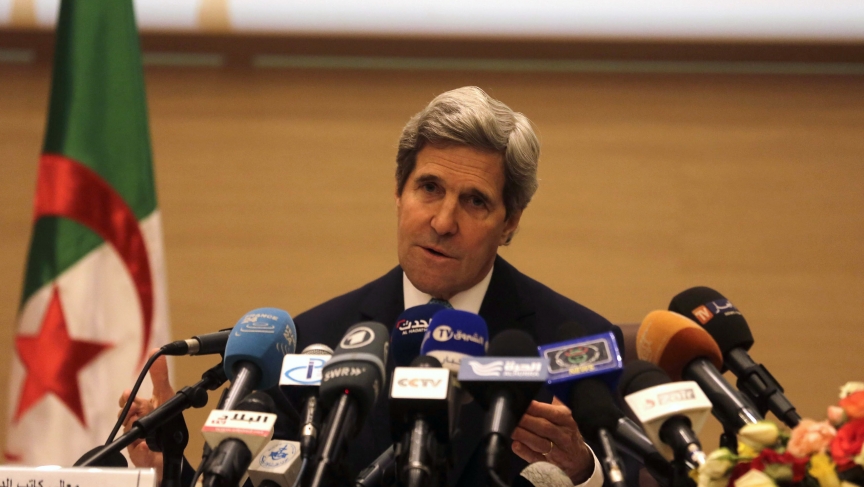 U.S. Secretary of State John Kerry addresses a news conference at the foreign ministry in the Algerian capital of Algiers on April 3, 2014.

No one thought it would be easy. But Secretary of State John Kerry still managed to resurrect some version of the long-moribund Middle East peace process over the last eight months. Now, those negotiations are running up against an end-of-April deadline.

The talks appear to be on the verge of collapse. Israel and the Palestinians are exchanging mutual recriminations. And Kerry's own dogged determination is being pushed to the limit.

“You can facilitate, you can push, you can nudge,” Kerry said on Thursday during a visit to Algeria. “But the parties themselves have to make fundamental decisions to compromise.”

Washington has expressed frustration with both the Israeli and Palestinian sides for taking, “unhelpful, unilateral actions.” But the Obama administration still says it is holding out hope for a way forward. Kerry said he would continue his efforts on the peace process, “no matter what.”

Israel on Thursday cancelled the planned release of 26 Palestinian prisoners. They would have been the fourth and final set of 104 jailed Palestinians that Israel had agreed to set free in a deal brokered by US negotiators last summer. But Israel's chief negotiator, Tzipi Livni, said in a statement that Palestinian leaders are the ones to blame for the change, because they failed to live up to their side of the arrangement by seeking greater recognition at the United Nations.

White House spokesman Jay Carney said the Israeli decision “creates challenges,” but he added that “neither side has indicated that they want to walk away from the talks.” The US has also opposed Palestinian efforts to win international recognition. Washington says the only way for Palestinians to secure their rights in the long run is to sign a peace agreement with Israel.

President Mahmoud Abbas is pursuing another track, however. He went on live television this week to sign up to 15 UN conventions and treaties. Palestinian officials said the timing of the move had to do with Israel's delay in releasing those 26 prisoners by the end of March. They also say their intention was not to sabotage the peace process, but to exercise their rights as a non-member state at the United Nations.

Palestine won recognition in a lopsided vote at the U.N. General Assembly in 2012. The Obama administration, along with the Israeli government, criticized the Palestinian move as a way to sidestep direct negotiations with Israel.

US officials maintain that they cannot want peace more than Israelis and Palestinians themselves. But many observers smelled desparation on the part of the Obama administration when it reportedly considered an early release for Jonathan Pollard, a former analyst with the US Navy who pleaded guilty to charges of selling classified intelligence to Israel in the 1980s. The gesture was apparently being offered by the Obama administration as an incentive to the Israelis for releasing those 26 Palestinian prisoners.

But if details from the Ma'an News Agency about a late-night meeting are accurate, Israel and the Palestinians certainly have their work cut out for them to conjur up momentum for further peace talks. On Thursday, Kerry brought up the old adage about bringing a horse to water, but not being able to make it drink.

“Now is the time to drink,” Kerry said. “The leaders know that.”