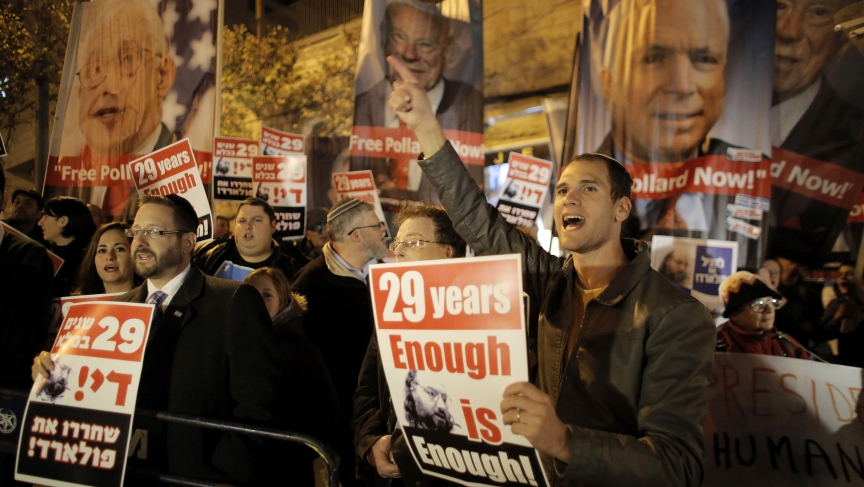 Israelis hold placards during a protest calling for the release of Jonathan Pollard from US prison, outside US Secretary of State John Kerry's hotel in Jerusalem on January 2, 2014.

Jonathan Pollard's name is back in the news — and analysts say it doesn't bode well for US-sponsored peace talks between Israel and the Palestinians.

Pollard is an American citizen convicted of spying for Israel and currently serving a life sentence in a US prison. Reports say Pollard could be freed early, however, in exchange for concessions by the Israeli government to keep Middle East peace talks from falling apart.

But who exactly is Jonathan Pollard and what did he do?

Jonathan Jay Pollard stepped into the national spotlight on November 21, 1985, when he drove his green Mustang into the driveway of the Israeli embassy in Washington. With him were his wife, Anne, their family cat, Dusty, their wedding album, their birth certificates and Dusty's vaccination records, according to a Chicago Tribune report published in 1989.

The Pollards were on the run from US law enforcement and they were at the Israeli embassy to seek asylum. But things did not work out as planned.

When an Israeli security guard refused entry to the Pollard couple, they left the embassy grounds and were quickly arrested by FBI agents. Pollard, who worked as a civilian employee of the US Navy, says he provided classified intelligence information to Israel out of a sense of duty. He wanted to help Israel defend itself from its Arab enemies, he says, and not to compromise the national security of the United States in any way. Eventually, he pleaded guilty to espionage and agreed to come clean about his spying. But in March 1987, Pollard was sentenced to life in prison. His wife was sentenced to serve five years.

Pollard was born to a Jewish family in Texas, and grew up in Indiana with a strong affinity for the state of Israel. He loved hearing stories about Israeli military heroes, according to Wolf Blitzer's book, "Territory of Lies,” with the unwieldy subtitle of, "The Exclusive Story of Jonathan Jay Pollard: The American Who Spied on His Country for Israel and How He Was Betrayed." Blitzer was Washington correspondent for the Jerusalem Post newspaper in 1987, and landed a prison interview with Pollard before he was sentenced. US intelligence officials said the interview was unauthorized and broke the terms of Pollard's plea agreement.

Going back into the accused spy's family history, Blitzer wrote that Pollard was bullied as a kid in Indiana for being Jewish. In high school, he visited Israel and developed a desire to emigrate there one day. But he never made the move. Pollard stayed in the US after attending Stanford University. He did graduate work at Notre Dame, Indiana University and the Fletcher School at Tufts. Pollard tried to get a job with the CIA, but was rejected after he admitted “extensive recent use of marijuana,” according to a declassified document from the office of the Director of Central Intelligence. He ended up getting a position as an analyst with the US Navy that focused on counterterrorism, a job that came with access to classified intelligence information.

Pollard's colleagues apparently became suspicious when they noticed him requesting large amounts of classified material that was not related to his daily work. The US government said the pile of secret documents Pollard would ultimately sell to the Israelis could fill a small room. But after he was arrested, Israel claimed no knowledge of Pollard's espionage activities. Foreign Minister Shimon Peres said the American spy was part of a rogue operation. Israel vowed to cooperate fully with the investigation. But Pollard thought he was acting on behalf of officials at “the highest levels of the Israeli government,” according to that DCI document.

Secretary of Defense Caspar Weinberger wrote a classified 46-page memorandum to the judge who sentenced Pollard, describing him as a dangerous spy. To this day, American intelligence officers say that Pollard committed treason — even though he was selling secrets to a US ally — and that he exposed US intelligence sources and methods.

The case of Jonathan Pollard was once a cause primarily among the political right-wing in Israel. But over the years, he has attracted widespread Israeli support — all the way up to the current prime minister, Benjamin Netanyahu, who visited Pollard in prison back in 2002 before beginning his current term in office. Many Israelis see Pollard as a Jewish American hero who stuck his neck out to help an American ally. They point out that other Americans convicted of espionage have been released from prison after serving far less time. Pollard was granted Israeli citizenship in 1995.

The former Israeli intelligence officer who was Pollard's handler when the American was selling stacks of classified documents to Israel, Rafael Eitan, said Pollard was not spying against the US. He was spying to assist Israel, Eitan told the BBC in a 2013 interview.

But Eitan, who is still banned from travel to the US, said running a spy operation with an American citizen on US soil was, “a political mistake.”

“I apologized many times,” Eitan said. “And I apologize now. I feel that the US is a model for all the world. If we don't have the US, there is a big risk and danger to the whole world.”