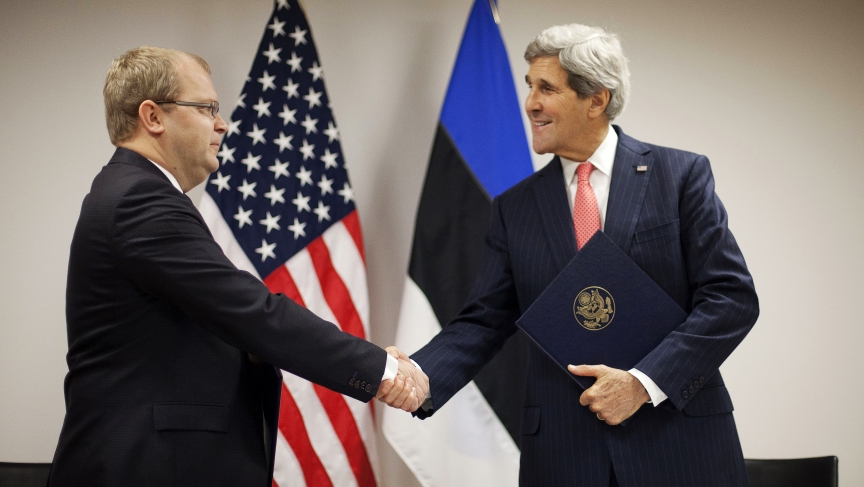 The situation in Ukraine has Russia's neighbors in the Baltic region casting a nervous eye eastward.

The three countries, Estonia, Latvia and Lithuania, were all part of the Soviet Union, like Ukraine, but are all also now members of NATO, unlike Ukraine. While that should provide a measure of protection, leaders there are still nervous.

Paet says he's deeply concerned by Russia’s stated belief that they “have some sort of right to protect Russian minorities everywhere in the world.”

Everybody is aware, Paet says, that the Russian immigrant population is increasing in many European societies. That would seem to imply more Russian intervention in more places.

“Russia’s posture has no place in the 21st Century,” Paet says.

Estonia has good reason to be concerned about Russia’s actions in Crimea.

In the early years of World War II, Russia invaded and occupied Estonia. Tens of thousands of Estonians, including almost all the nation's political leaders, were executed or deported to labor camps, where most of them died. In 1949, under Joseph Stalin, more than 20,000 Estonians were deported, accused of being disloyal to the Soviet Union.

Since Estonia declared its independence in 1991 and the last Russian soldiers left in 1994, relations between the two countries have been tense. Russia has often accused Estonia of discriminating against the 25 percent of its population that are ethnic Russians. Russia strongly opposed Estonia's acceptance into NATO and the European Union in 1994. For its part, Estonia has accused Russia of using an “information campaign” to stir up tensions between Estonians and ethnic Russians.

Putin’s recent speech announcing Russia's annexation of Crimea, was filled with strong appeals to the hearts of ethnic Russians and to the idea of the Motherland. This is not new, Paet says. Russia and Russian leaders have been expressing these views for years.

He says the European Union and the international community must be very clear that this type of attitude is not acceptable.

Despite all of that, Paet feels relatively good about Estonia's security situation.

“I’m sure that Russia and the Russian leadership know this very well, and all our allies in NATO and the European Union know this very well. So, I don’t think that we have to be more concerned in Estonia at the moment than in any other European country.”