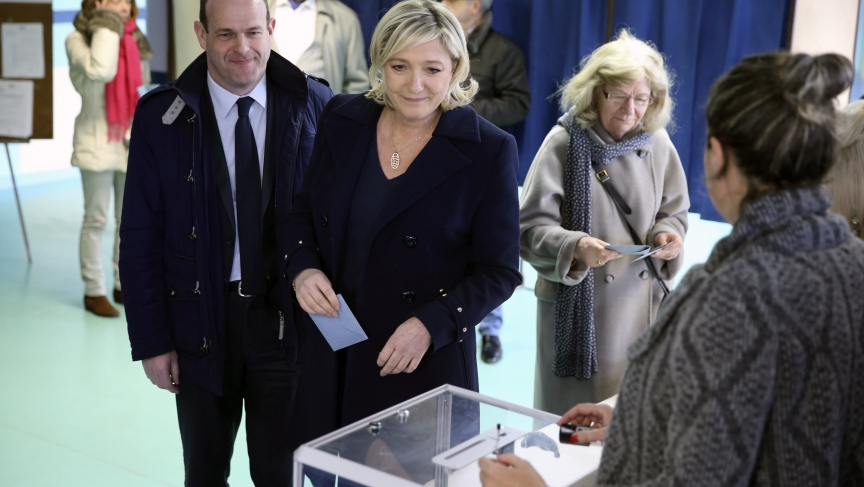 French voters turned to the mainstream conservative party in municipal elections over the weekend as citizens continue to lose faith in the ruling socialist party.

Socialist French Prime Minister Jean-Marc Ayrault resigned Monday after his party lost about 155 seats in cities and towns across the country.

"This was really a major, major defeat — far beyond anything we might see in a kind of midterm election type of dissatisfaction," says Vivienne Walt, a Paris-based correspondent for Time Magazine.

Walt says much of the French frustration with the Socialist Party stems from their dislike of President Francois Hollande's policies and seeming inability to fix the lagging economy. While the UMP, the mainstream conservative party in France, gained seats, a far-right party called the National Front was the real upset in the election — gaining an historic number of seats.

The National Front garnered enough votes to control 12 mayorships in this election cycle. The most it has ever held at one time before this was four, according to The Guardian.

"I think that the National Front are genuinely capturing a lot of people's attention," Walt says. She believes voters are turning to the far-right party not only because they are fed up with the establishment, but also because they feel disillusioned with the current state of the European Union.

The National Front "has tapped into a kind of zeitgeist, if you like, in France of people feeling like they don't have control of the direction of their lives politically," Walt adds.

While some in France may feel their French identity is overshadowed by their European identity — and that their choices are constrained by the power of the European Union — others are embracing the breaking down of political barriers in Europe.

Anne Hidalgo, who was elected the first female mayor of Paris this weekend, and Manuel Valls, who was appointed prime minister by Hollande Monday afternoon, are both Spanish-born immigrants to France.

"Increasingly, what is interesting in Paris, and also several big cities in Europe, is that the leadership at the top is now of a generation that has come of age under the European Union," Walt says. "And they see themselves very much as Europeans."

"This is a very small continent and the politics are extremely interwoven at this point."