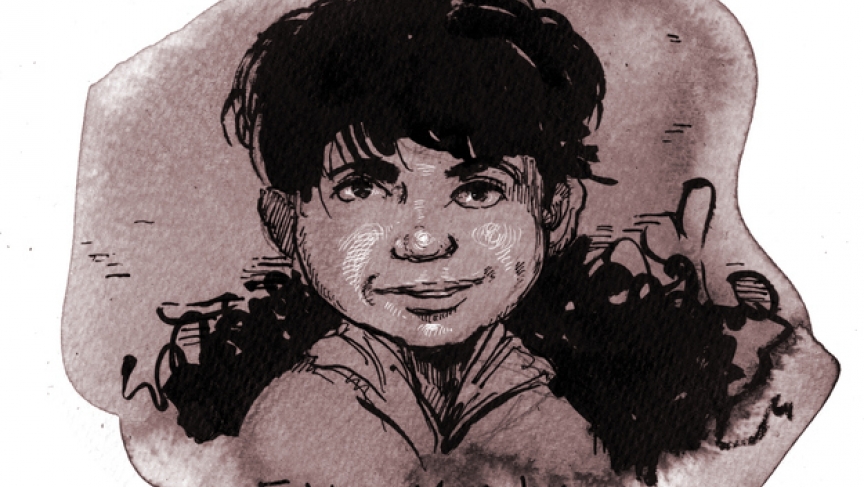 Molly Crabapple's portrait of Fatima Meghlaj, age 2, who died in a bombing of her hometown in Syria.

Molly Crabapple for the #100000Names Oral Memorial for Syria

Since the conflict in Syria began three years ago, some 140,000 people have died in the fighting, according the United Nations. To be honest, the UN had to stop counting the dead in Syria in January of this year, when it became too difficult to verify information coming out of the war-ravaged nation.

As an oral commemoration of the dead, volunteers are standing in front of the White House from March 12 to March 15, reading out the names of the more than 100,000 Syrians who have died. It is part of a project called “Over #100,000Names …How many more?”

One of those helping is American artist and illustrator Molly Crabapple, who in recent years has used her artistic talents to cover the Occupy Wall Street movement, the US military's dention center at Guantanamo Bay in Cuba and the economic crisis in Greece.

Last year, Crabapple did some work for the New York Times, covering the Syrian refugee crisis in Lebanon. And so, when the #100000Names project contacted her about doing some portraits, she didn’t hesitate.

“It's so easy to see the people who die in a war as faceless victims or geopolitical pawns. It's so easy to forget these were individuals who were loved, who were brave, and who had dreams and hopes in life,” Crabapple says.

“And what I want to do with my pictures is to say each and every one of these people is important. Look at them. It's about remembering these people as individuals, rather than just statistics.”

Crabapple's 15 portraits are proof that the war has left few in Syria untouched. She says she tried to get a cross-section of Syrian society — young and old, women and men, people on all sides of the conflict.

“Some of these people were activists in the revolution, and they started out with such idealism. They started out peacefully. One activist, Ghaith Matar, who was known for giving out roses and water to soldiers, was tortured to death by the Assad regime,” she says.

Another of Crabapple's sketches is of Dr. Mohamed Abyad, a 28-year-old orthopedic surgeon.

“He was a member of Doctors without Borders, and a local extremist group — many believe it was ISIS — tortured him to death,” she says.

Some of Crabapple's subjects are well-known.

There's a sketch of 11-year-old Rua Ismael, who died a a year ago in a bombing. Syrian social media dubbed her "Syria's Snow White."

“He's actually a child who was kidnapped during a protest, and whose body was returned to his family with the most horrific marks of torture on it,” says Crabapple. “He was covered extensively in the international media, because his death set off the protests in Daraa.”

Daraa is a city in southwest Syria where some of the earliest protests against the regime of Bashar al-Assad began.

Crabapple says she got the source material for her portraits from a variety of places: newspapers, a crowd-sourced website called Syrian Martyrs, and from friends and relatives of the dead.

“In Syria, just like in the US, most people have camera phones, and they document the life around them. Their life just happens to involve horrible war,” she explains.

Crabapple told me that bringing Syria’s dead back to life in the portraits was heart-wrenching.

“It is extremely hard to look at these beautiful young faces full of life, full of hope, full of dreams...and then look at their dead bodies, or read their stories."

“There was a young girl, 2 years old, named Fatima, who was decapitated during shelling. And the picture of her father holding her corpse, in this little beautiful little blue dress, with no head, became a powerful symbol of the inhumanity of Assad's bombing campaigns.”

So far, the response to Crabapple’s portraits has been positive, although she says there has been some backlash against the project, saying that it's politicizing the dead.

Crabapple says, “I find when someone is a political activist, and has been tortured to death by the state, that is political. I think de-politicizing that is disingenuous.”

From Occupy Wall Street to the streets of Greece and beyond, Crabapple’s never shied away from the political.

“For me, doing work on Syria came out of the same body of interest,” she says. “The revolution in Syria was one of the 2011 uprisings that spread from Tahrir Square in Egypt.

“I feel that Occupy Wall Street was part of all that, except instead of just spending a night in jail, like my friends did, the protesters in Syria were being tortured to death, or shot with live ammunition during protests," she says.

“So, I thought that activists in the US should stand in solidarity with them, because they are people fighting for their freedom.”

And that’s why, Crabapple says, she intends to continue covering the conflict in Syria, long after those 100,000-plus names are read out in front of the White House.