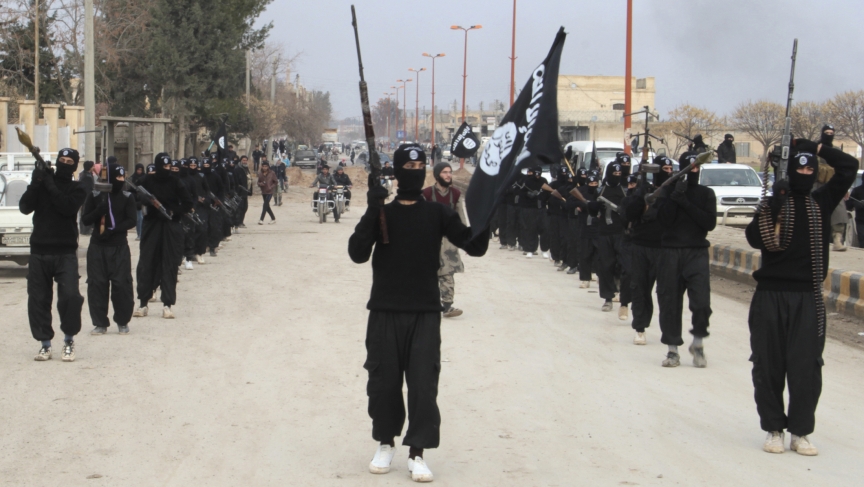 Fighters of the Islamic State of Iraq and Greater Syria, or ISIS, parading through the Syrian town of Tel Abyad, last Thursday. The next day ISIS fighters were surprised by a concerted attack by other Syrian rebel groups. Dozens were killed.

The latest rounds of fighting in both Iraq and Syria had something in common. They involved a powerful al-Qaeda spin-off group known as the Islamic State in Iraq and Greater Syria, or ISIS, fighting on two fronts.

ISIS has had quite a week. In Iraq, it was on the offense, trying to seize key cities in the Sunni Muslim heartland of Iraq, throwing down a direct military challenge to the predominantly Shiite government of Nouri al-Maliki. But in Syria, ISIS — also known as ISIL — was on the defense, as it came under concerted attack by other rebel groups.

ISIS is one of many jihadi militias in Iraq and Syria. Yet it is unusual in the extent of its power, its ambition, and its willingness to fight in two countries at once.

"It's led by one man," says Borzou Daragahi of the Financial Times, "Abu Bakr al-Bagdadi, who is in command nominally of forces in two countries, Iraq and Syria." And, Daragahi says, "This is the one group that many people have been worried about."

That's because ISIS claims the trappings of power and governance. "When it takes over a town, it starts painting buildings black, and putting out signs — their logo — on government buildings," says Daragahi. "It sees itself as running territory once it captures it, rather than merely fighting against Bashar al-Assad, which is what many of the other militant groups in Syria have been doing."

ISIS also metes out its own brand of Islamic justice. It was the execution of a popular doctor in Syria, the brother of a rebel commander, that led other Syrian rebel groups to unite and attack ISIS on Friday.

The foot soldiers of ISIS appear to be mostly Syrian and Iraqi Sunni Muslims. "But they include people from other Arab countries," says Daragahi. "And there are even units that include people from as far afield as Indonesia and Chechnya. This is a transnational Islamic militant phenomenon. They don't believe in national boundaries. They believe in Islam as the only authority to which to answer."

Daragahi says that's why many people in Syria, including many of the rebel groups, see ISIS as somewhat alien to their cause.

In Iraq last week, ISIS fighters, with some support from local Sunni tribes, attempted to take control of the cities of Fallujah and Ramadi in Iraq's Anbar province. That area is predominantly Sunni, while Iraq's government is dominated by Shiites.

ISIS succeeded to a large extent in capturing Fallujah, but ran into trouble in Ramadi. Many local Sunni tribes have come out against ISIS, while others have switched sides. The Iraqi army is now poised to attack Fallujah and local residents are fleeing. The US attempt to re-capture Fallujah in 2004 was one of the bloodiest battles of the Iraq War.

Anbar province was also the scene of the "Arab Awakening" or Sahwa back in 2007 and 2008, when Sunni tribes rallied to the American cause against al-Qaeda. It's not clear currently exactly which tribes are backing ISIS and which have come out for the government, although the largest tribe, the Dulaimi, has clearly come out for the Iraq government.

"The Emir of the Dulaimi tribe," says Daragahi "is throwing in his lot with the government, even though there's huge tensions between the vast majority of Sunnis and the Shiite-dominated government of Maliki." Sunnis have been progressively excluded from power under Maliki's administration since US forces left Iraq.

"If this works in Iraq," Daragahi says, "Maliki will really owe his skin to these Sunni tribesmen, because he has not been good to them. He is, in many respects, the cause of al-Qaeda coming back to Iraq: his sectarian rhetoric, his policies, his security forces, have created a fertile ground for al-Qaeda to come back in Iraq. And if these guys save his butt, so to speak, he really owes them."