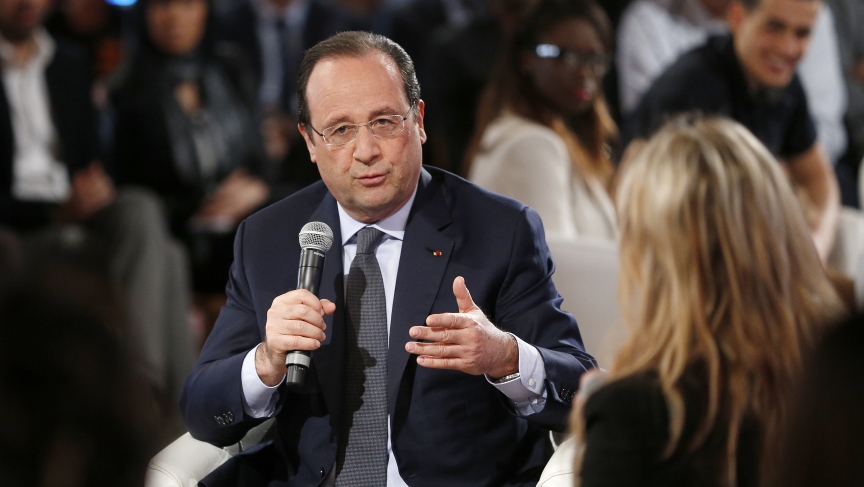 French President Francois Hollande makes a speech during a roundtable meeting about employment with youth at the Elysee Palace in Paris, March 11, 2014.

Francois Hollande is the least popular French president ever, according to recent polls. And his speechmaking isn't helping his popularity — he's been criticized as a boring speaker. But Hollande has a plan to change that, and boost his appeal.

He’s hired an expert in rap music to help write his speeches. His new chief speechwriter is Pierre-Yves Bocquet — also known as Pierre Evil, one of France's top rap music critics and a worldwide specialist in "gangsta-rap," according to France24.com.

Bocquet lists Snoop Dogg and Tupac as major influences on his music — and if Hollande's speeches get anything like their music, they will be anything but boring.

The island of St. Helena is one of the most remote places in the world. Marooned between the coasts of South America and western Africa, it is part of the British Overseas Territories in the South Atlantic. Here, at the official residence of Mark Capes, governor of the islands, lives Jonathan — a giant tortoise believed to be 182 years old.

He has four other giant tortoise friends on the island — Myrtle, Fredrika, David and Emma. Despite being born in the first half of the 18th Century, Jonathan has retained some of his faculties — his hearing is still good, although he is virtually blind and has no sense of smell. He still enjoys a gentle stroke from visitors. The BBC has more — including photographs of Jonathan in his younger days.

British fashion designer Paul Smith has a new shoe out, and it's causing a bit of a splash in Pakistan. That’s because the 'Robert' or ‘Bob’ sandal, which sells for almost $600, is very similar to a traditional sandal commonly worn in Pakistan and other places on the Asian subcontinent. It's called a “chappal” and costs just a few dollars. It's worn by millions of Pakistanis every day.

So what’s really going on? PRI’s The World spoke to the writer and columnist Bina Shah, who lives in Karachi. She said her first thought was "$600? You've got to be kidding me ... The second thing that came to my mind was cultural appropriation."

This is one deep meditation

Devotees of an Indian guru who died six weeks ago have frozen his body in preparation for his return. Ashutosh Maharaj died in the Punjab of a suspected heart attack at the end of January. He was the head of the Divya Jyoti Jagrati Sansthan (Divine Light Awakening Mission), which allegedly has more than 30 million followers. Despite doctors declaring him dead, his followers believe he has merely fallen into the deepest possible state of mediation, and have placed his body in a freezer until he is able to return to lead them again, according to the Hindustan Times.

When actor Philip Seymour Hoffman died of a drug overdose earlier this year, filming was nearly done for the final installment of The Hunger Games. Unfortunately, it wasn't completely done — and Hoffman played a major role. Rather than rewrite the script, filmmakers decided to turn to technology.

Hoffman's last scenes will be created digitally — at least his character. The scenes will be shot normally, but Hoffman's character will be inserted digitally, after his motions and actions are recreated by a computer. But Studio 360 tells us that this might not be as simple as we might think. The slightest screw-up could make people feel downright revolted by the entire scene, one expert says.

Yesterday, this photo made the rounds: pic.twitter.com/FAXfXkTo9u Here's a video of that moment and what followed. http://t.co/TjRmR9bHDq

Malaysia has a problem with bad air — and it's because of the lack of rain in recent weeks. According to AccuWeather, over the past two month, the country has received just 10 percent of its normal 12" to 15" of rains. That limited rainfall is caused by a high pressure ridge that not only keeps the rains out, but also traps pollutants in. Pollution has gotten so bad, officials are considering school closures. Some rain is expected later this week, which should help the problem.

Just who can you believe? 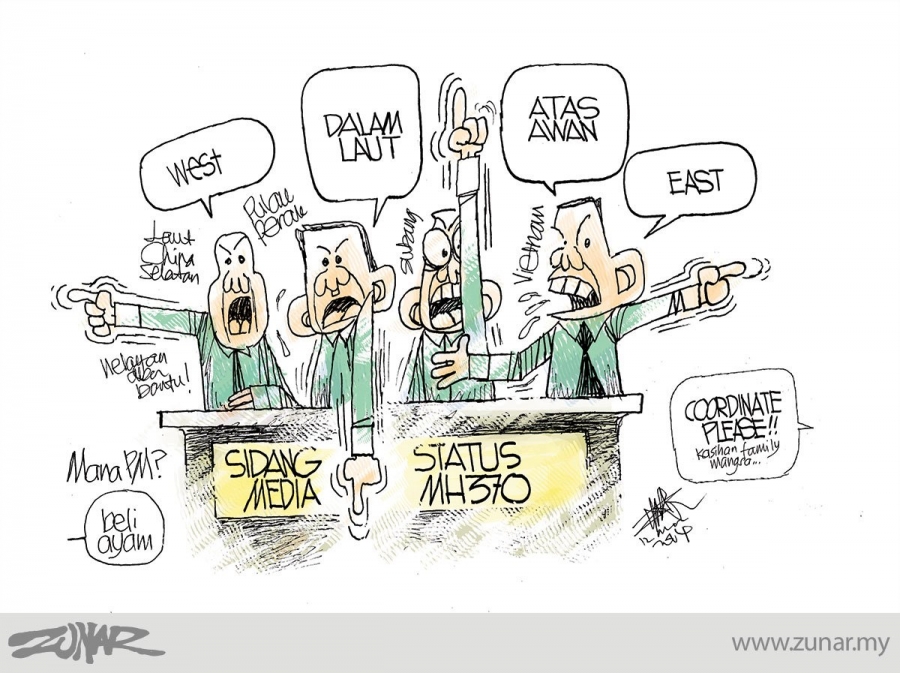 Malaysian political cartoonist Zunar comments on their country's handling of the search for the missing Malaysian airliner. The cartoon is a comment on the conflicting information the Malaysian government has given about the plane's location.