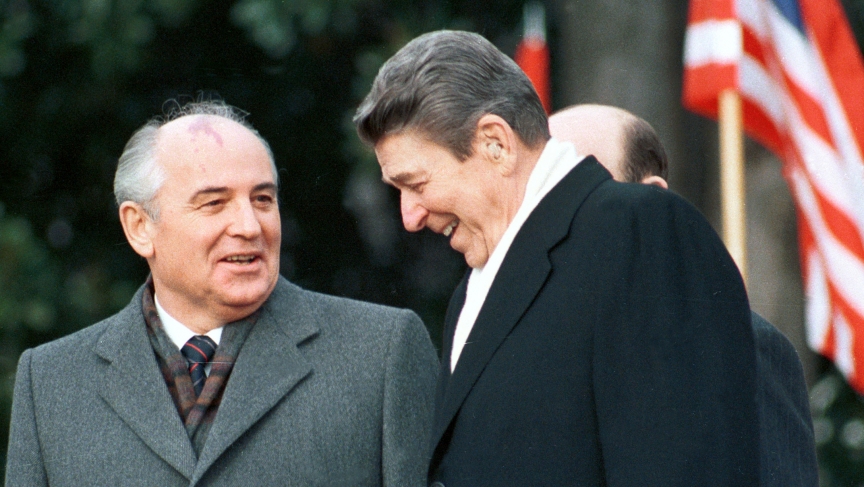 The year was 1984. It was the height of the Cold War and Russian historian Suzanne Massie will never forget the moment she got a call from the White House.

President Ronald Reagan had read her book, Land of the Firebird: The Beauty of Old Russia, and invited Massie to the Oval Office to brief him on the Russian worldview.

That first meeting, in January 1984, was the first in a series of closed-door meetings that would continue until 1988 — through some of the tensest moments of the Cold War.

Massie’s conversations with Reagan are the subject of her latest book, Trust, but Verify: Reagan, Russia, and Me.

“Reagan was the only politician I ever met who really wanted to know not, ‘What did the Kremlin think?’ but, 'What did the Russians think?'” said Massie.

One of the first things she spoke to the president about was the importance of the Russian Orthodox Church. In Massie’s description of that first meeting with Reagan, speaking about the Russian religious point of view was an ‘aha’ moment for the president.

“No one had ever told the president of the United States that the Russians were religious," Massie said. "I think that humanized the Russians for him in a way that he could understand."

After that moment, according to Massie, the president began to talk privately about religion with Russian General Secretary Mikhail Gorbachev.

“I think it was perhaps the most important thing I told him,” Massie said.

However, we might recognize another important thing that Massie told President Reagan. That is, the Russian proverb "Trust, but verify."

The old Russian expression came up while Massie was having lunch with the president right before he left for the 1986 Reykjavίk Summit with Gorbachev.

“You know the Russians often like to talk in proverbs and there’s one that might be useful,” Massie told the president. “You’re an actor, you can learn it in a minute, ‘Trust, but verify.’”

That phrase has since passed into the American lexicon.

After advising President Reagan throughout the Cold War, Massie is disturbed by the recent turn of events in Crimea.

“Ukraine did not exist as an independent country until 1991. And it had not been ‘taken over’ by Russia. It was part of Russia,” Massie said.

Kiev, she says, was the birthplace of Russian civilization.

“It has been Russian since the Ninth Century. Crimea was won by Russia from the Ottoman Turks,” Massie said.

Massie insists that she’s not arguing for Putin, but she brings up the issue of Russia’s sphere of influence. She compares the current Russian invasion of Crimea to the US invasion of Grenada in 1983.

“It’s wise to remember when there was Grenada, where suddenly Soviets were building airfields, Ronald Reagan did not hesitate one second when he sent the Marines. And he said he was protecting the American students — there were only a handful of medical students. We considered that our sphere of influence,” said Massie. “We seem now, today, to have denied the Russians any right to a sphere of influence. We don’t recognize or consider that they have a sphere of influence, too.”