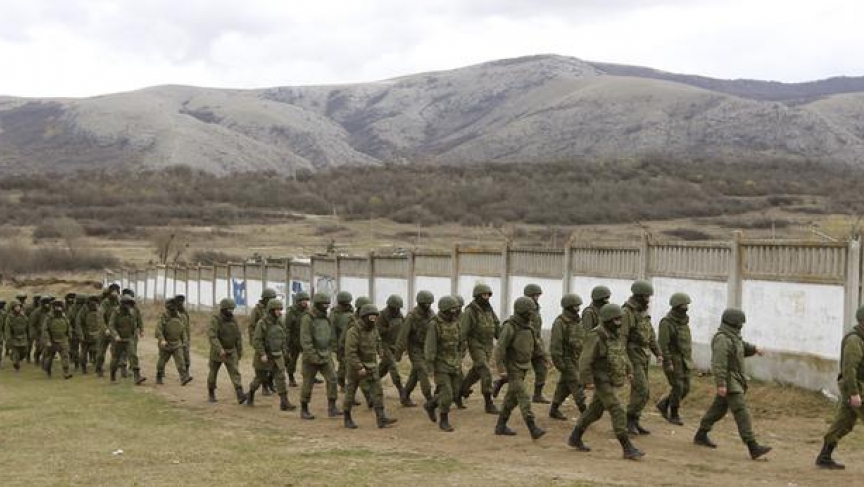 Uniformed men, believed to be Russian servicemen, march outside a Ukrainian military base in the village of Perevalnoye outside Simferopol, March 5, 2014.

Poland is invoking Article 4 of NATO regulations, which allows a country to call for consultation if it feels that its security and independence are threatened.

"This is a seminal event for Poland," says Dr. Andrew Michta, a professor of international relations at Rhodes College in Memphis, Tennessee and a senior fellow at the Center for European Policy Analysis in Washington, DC.

"It looks at Ukraine as essential to the security not just of Poland, but also of the whole region, and conversely, it looks at what Russia is doing as a resurgence of a near-Imperial position that the Putin presidency has been pursuing."

US Secretary of Defense Chuck Hagle said on Tuesday that America will increase military cooperation with Poland and Baltic states as a sign of "support" for its allies.

So why is Poland so anxious about events in Ukraine?

"For the Poles, this is something that's redefining the security of their country and is becoming a test for NATO," says Michta.

"The Poles see this as a longer-term trend of Russia shifting the momentum ... and they see the events in Ukraine as only the first steps," he says. Russia, in essence, seems intent on rebuilding the power it lost after the break-up of the Soviet Union. Michta says Poland worries that its next steps might affect the states of Moldova, Georgia and other Baltic states, as well as Poland.

He says Poland and Ukraine have had a long and complex relationship. Several centuries ago, they were both part of the same state, known as the Polish-Lithuanian Commonwealth.

"Since the collapse of communism, Poland has viewed good relations with Ukraine as an essential element of its national security."

In fact, Michta says, Poland and Sweden were the drivers of bringing Ukraine into a partnership with the European Union — the action that set in motion the current crisis with Russia. Within the EU, Polish Foreign Minister Radoslaw Sikorski was an originator of the idea of greater engagement to the East.

If Russia escalates further its military presence in Ukraine, Poland's leaders feel it will be very hard to predict what comes next, Michta says.

For Poland, preserving the integrity of Ukraine has been the number one priority, and it wants to prevent Russia from increasing its military power in Ukraine.

The way Michta sees it, Russia's actions in Ukraine are steps in a "geo-political game" that may well re-define the relationships between Russia and its neighbors.