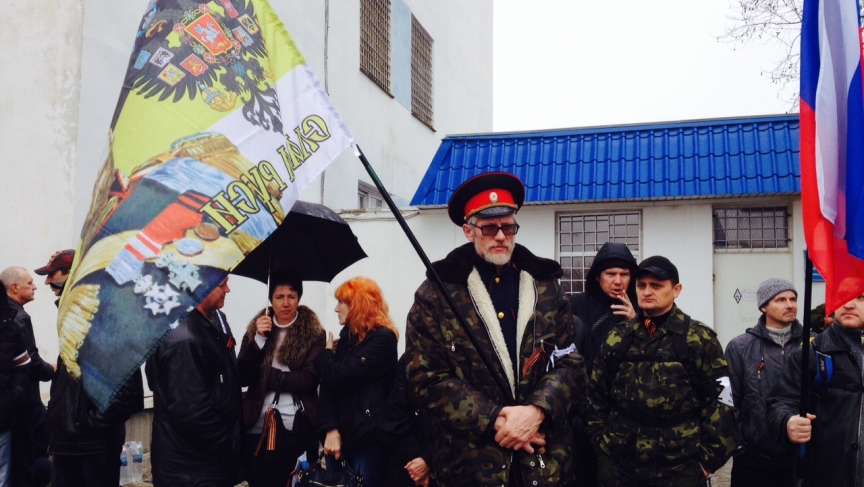 A group of Russia supporters stand outside the entrance to the Ukrainian naval headquarters in Sevastopol. They say they see Crimea's future with Russia, not Ukraine.

Russia’s President Vladimir Putin gave a long press conference on Tuesday, his first since the crisis in Crimea began. Putin said there is no need to move Russian troops into Ukraine. He also said there are no Russian soldiers outside their barracks in Crimea.

It looks a little different on the streets of Sevastopol.

There, a long line of men guards the entrance to the Ukrainian naval headquarters. Dressed in civilian clothes, the men wave Russian flags and ask me for ID as I approach. I explain that I have a meeting with one of the Ukrainian commanders, Vladislav Litovchenko.

You can’t enter, they say. There are dangerous men inside. You might provoke them.

As I walk along the fence, they follow me, so I ring my contact in the base; he’s just behind the gate. On the phone, Litovchenko tells me he’s watching me. I try to tell him that I can see him, but the men won’t let me get any closer. It’s impossible to talk on the phone.

The men start pushing me. “You prostitute,” some of them shout. “Go back to the Jews and gays who sent you here.”

These men say they are here because they believe fascist forces have ousted the government in Kiev. They see their future with Russia, and for the past 24 hours, they have been keeping hundreds of Ukrainian navy officers blocked inside this base.

When I get back to my car, I call Litovchenko again.

“We are right now trying to defend our base from pro-Russian forces,” he tells me. These forces, he explains, tried to storm the naval headquarters, with the help of Russian soldiers on Monday. Since then, they have tried to cut off the supply of water and electricity. They have also tried to force the officers inside to take an oath to the new pro-Moscow government — none of them did.

An hour after I spoke with Litovchenko, Putin made his statement that there were no Russian troops in Sevastopol, besides those stationed at Russian navy bases in the city. The men blocking military bases, he said at the press conference, must be volunteers.

That’s news to some Ukrainian officers at a military base about 10 kilometres outside Sevastopol. Across from the base, there are four military trucks — without licence plates. Men in balaclavas with machine guns and anti–tank weapons are standing in the field. Their uniforms are not marked, but officers at the Ukrainian base say they know who these men are.

Ukrainian Army Capt. Andrey Inanichenko says Russian army officers came to his base three days ago, demanding the Ukrainians lay down their arms. The Ukrainians refused and have been locked inside the base ever since.

“The base is under constant surveillance. Four trucks with Russian special forces are here constantly,” Inanichenko says. “There are also two snipers positioned on either side of us. At the moment, senior Russian officers from the navy battalion are negotiating with our commanders. Russians are still demanding that we hand over weapons.”

Capt. Inanichenko laughs when I tell him that President Putin said these men are volunteers. Back in Sevastopol, I meet a Ukrainian businessman named Ruslan who finds Putin’s statement deeply worrying.

“I think this is a really dangerous maneuver,” Ruslan says. “Putin is trying to draw attention away from Crimea and pretend that nothing is happening here. He will not let go of the gains that Moscow has made here.”

To be sure, President Putin has genuine supporters here in Crimea, and in the past few days, their loyalty has been rewarded. Russian citizenship is notoriously difficult to obtain, but these days, in Crimea, anyone can apply for, and easily get, a Russian passport.

“I hate my Ukrainian passport,” a man in Sevastopol told me. “I am getting a Russian passport for me and my family, and I am very happy about it.”

This is a measure the Kremlin has used in Georgia’s breakaway states of Abkhazia and Ossetia — where most people now have Russian passports. Putin says he has no plans to annex Crimea, but maybe he won’t even have to.

With a pro-Moscow administration in charge, Russian passports in easy reach, and Russian soldiers out in the streets, Ukrainians may have good reason to fear that the region will simply fall into Putin’s embrace.