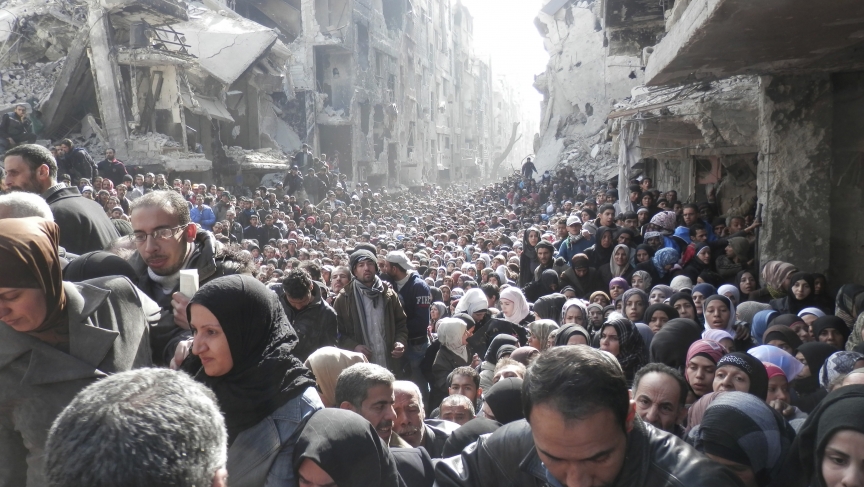 Residents wait to receive food aid distributed by the UN Relief and Works Agency (UNRWA) at the besieged Yarmouk camp, south of Damascus.

After more than three years of war in Syria, we have all seen plenty of photos of bombed out neighborhoods, piles of rubble, and the dead. But for those of us peering into these distant, man-made disaster zones from the outside, it's easy to forget that these scenes of destruction are also still home to many, many people.

And some of them are facing a relentlessly grim situation.

The Yarmouk district of Damascus has been home to Palestinian refugee families going all the way back to the 1948 Arab-Israeli war. Additional waves of refugees helped the area grow into a busy residential and commercial section of the Syrian capital, where about 150,000 Palestinians lived alongside Syrians. But no longer.

Today in Yarmouk, more than 20,000 people find themselves under a punishing siege that began nearly a year ago. The fighting has made it impossible for them to get out. Residents do leave their hiding places most days — hoping to find some food being handed out by aid groups.

The BBC's Lyse Doucet just returned from a visit to Yarmouk, and she says starvation is being used as a weapon of war against this besieged section of the Syrian capital.

“Even in wars there are rules,” Doucet said from Beirut. “One of the rules is that civilian populations should not be punished. It's happening every day in Syria."

Doucet accompanied aid workers with UNRWA, the United Nations refugee agency for Palestinian refugees, delivering emergency food aid to people in Yarmouk. She described the road leading into the district as a “ghostly corridor,” and said the level of human suffering she saw was shocking.

“There was a tide of people waiting in this narrow alleyway,” said Doucet, a veteran war correspondent. “No matter how many images you see uploaded on YouTube and other social media sites, no matter how many photographs you see, it does not prepare you for the shock of this, when you actually enter and see it with your own eyes.”

As journalists and UN aid workers arrived, “people came lunging toward us, thinking that we worked for the United Nations, begging and pleading for us to somehow help them to get out.”

“We are dying here,” an older woman in a black headscarf said to Doucet and her team. The woman broke into sobs and said she had been eating grass. “Please, please take us out,” the women pleaded.

Keep in mind, Doucet pointed out, that Yarmouk is just a 20 minute drive from the center of Damascus, where people can be seen going about their daily lives and visitors might forget that the country is in the midst of a brutal civil war.

By contrast, the scene in this particular section of the capital, “looked as if an earthquake had struck,” she said. “But this was a man-made earthquake, the result of a life where there's been daily shelling, there's been bombardment, fighting street to street, and the people have had to live with this day in, and day out.”

Yarmouk started getting caught up in the violence of Syria's civil war more than a year ago. Armed rebels fighting against the forces of President Bashar al-Assad started operating in the district. Government attacked the district and eventually, Doucet said, “they cut it off with this 'surrender or starve' policy.”

And some say it's working.

“At the point of starvation, people [are] so tired, so frustrated, so exhausted,” Doucet said. People in Yarmouk and other besieged parts of Syria are telling the government, “let's make a deal.”

“Starving a community is a war crime,” she said. “Can it be allowed that this kind of tactic is used in the century in which we live?”