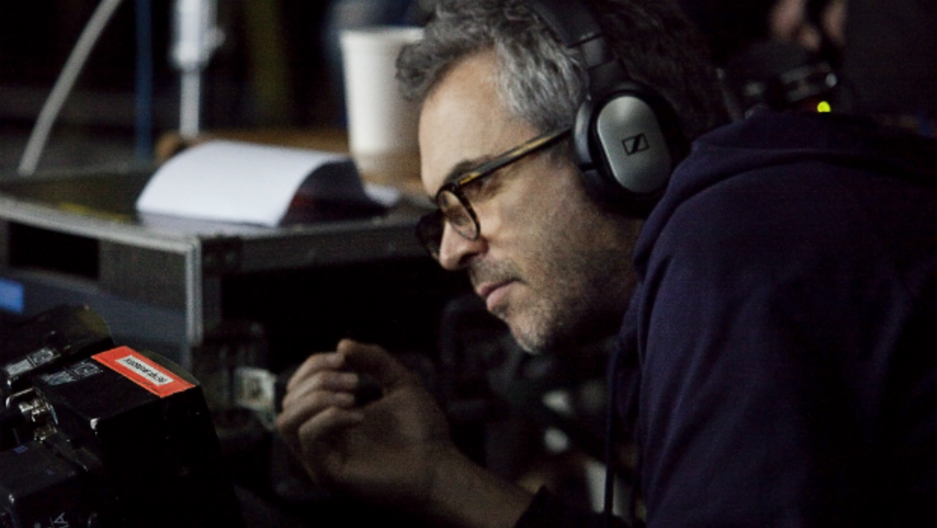 You held your breath during Gravity. You grimaced through The Wolf of Wall Street. But do you know what drives this year's crop of Oscar-nominated actors, directors, and films? Studio 360 has you covered. Kurt Andersen spoke with Gravity director Alfonso Cuarn about his film's greatest special effect (it's not weightlessness). Leonardo DiCaprio explained how his humble childhood informed his greedy leading man. And if you're still hungry for a choice piece of Oscar trivia, here's the story of the man behind the Oscar statuette. Hint: he's not named Oscar. It took director Alfonso Cuarn four years to realize his vision for Gravity. "It was a miscalculation," he told Kurt Andersen. "I finished the script and thought it was something straightforward, but we realized the technology did not exist." But despite all those trailblazing effects, Cuarn doesn't want his movie to be seen as a spectacle. "This film would be completely shallow if not for the biggest visual effect here --- that's the performance of Sandra Bullock." Alexander Payne says Bruce Dern was always his first choice for Woody, the stubborn, matter-of-fact star of Nebraska. Elements of the veteran actor's privileged upbringing shaped his performance. "I never saw my father laugh, he never shed a tear," Dern tells Kurt. "He was kind of a stoic." At one point in the movie, Woody visits his childhood home, a moment Dern calls "the hardest scene I've done in my career." That's a career that includes movies with Elia Kazan, Alfred Hitchcock, and Sidney Pollack. Nevertheless, Dern calls Payne "the best director I ever worked for." By now, it's impossible you haven't noticed Matthew McConaughey's career renaissance --- some call it the "McConaissance." Over a two-year hiatus from Hollywood, he orchestrated his transformation from rom-com stud to dramatic lead. "I want to do something that scares the hell out of me," the actor told his agent. Starting in 2011, McConaughey began playing a string of dark, complex characters, a journey that culminated with his performance in Dallas Buyers Club. "He was a guy looking for a line in life," McConaughey said of his role as Ron Woodroof, the macho hell-raiser diagnosed with HIV/AIDS who takes to the black market to import unapproved drugs and supplements. "Ironically, he didn't find direction until he got HIV." The Wolf of Wall Street
Nominations: 5, including Best Picture and Actor

Leonardo DiCaprio and Martin Scorsese's fifth collaboration features more sex, drugs, and profanity than their previous efforts combined (it may even be a record-breaker in that regard). Recently, the actor has become something of an expert in playing rapacious, villainous types. "It probably stems from having a poor upbringing in Los Angeles and being accepted into a school where I got to go see how the other half lived," he told Kurt. "I think Marty's films have always been about the pursuit of the American Dream, in a lot of ways, the corruption of that dream, and the hustle it takes to get there." When filmmaker Joshua Oppenheimer set out to tell the story of the 1965 Indonesian mass killings, he found that its survivors continue to live in fear and silence. So he turned his camera on the men who carried out executions, who were so boastful of their accomplishments, they even restaged the murders for Oppenheimer's crew. The result is a hallucinatory film within a film in which paramilitaries imagine themselves as gangsters in dramatizations that look like bad B-movies. "It's the unmasking of the whole regime," Oppenheimer told Kurt. "So, it's both terribly moving, but also cathartic and joyful because finally the regime is showing its true, rotten logic." Adam Driver wasn't nominated for his performance in the Coen Brothers ode to 1960s Greenwich Village folk, but he stole enough scenes that he makes our list. He trained at Julliard for acting, but he credits some of his success to his earlier training, as a Marine. "You're trying to accomplish a mission that's greater than yourself, it's not about you, you have to know your role within a team, and the pressure is really high."