McDonald's in Spain, like this one in Madrid, are testing a new, later breakfast menu to appeal to Spain's late dining culture.

Despite being one of the most successful franchises in the world, McDonald's has been temporarily stumped by the famous late dining culture in Spain. So the fast-food chain is giving its menu a bit of a shift.

Many Spaniards typically eat dinner around 10 at night and, consequently, tend to forgo breakfast for a late morning snack of churros con chocolate (fried dough sticks and hot chocolate dipping sauce), and chorizo (a Spanish sausage), according to the website thelocal.es. McDonald's has had trouble tempting Spanish customers into its restaurants in the mornings.

Spain’s unusual eating hours have been a topic of debate recently, with some wondering if the country should move its schedule more into line with the rest of Europe. For now, though, McDonald's will adopt the local customs and serve a more Spanish breakfast menu until 1 pm — an hour later than in other European countries.

Heavy storms uncover a lost forest on the Welsh coast

The beaches of Wales in the United Kingdom have taken a hammering in recent weeks, lashed by unusually strong storms. But the strong storms have uncovered a buried treasure of sorts. A prehistoric forest was revealed, as waves stripped tons of sand off the beaches in Cardigan Bay.

Hundreds of trees that died more than 4,500 years ago were buried under layers of peat, sand and saltwater. Some of the "skeleton trees" had been revealed before, which led to a local legend that a lost kingdom, Cantre'r Gwaelod, was beneath the sea, according to the Guardian. This time, far more of the forest has been revealed — as well as a timber walkway, believed to have been constructed between 3,100 and 4,000 years ago.

Maybe you actually want to be sent to Siberia

When you think of Siberia, what comes to mind? Gulags and frozen tundra? Perhaps you've heard the phrase “social Siberia” to describe someone left out of things, ignored by other people.

Writer Alina Simone says Siberia is a great place, but has a bad PR problem, despite increased media coverage of Russia in the past year. Simone spoke to PRI’s The World about what Siberia is really like.

Can a whisper bring happiness?

Members of the ASMR community spend hours online discussing different forms of visual, auditory or cognitive stimulation that produce a pleasurable tingling sensation in the head or neck. One of the most common forms is whispering — hence the popularity of these YouTube videos. The BBC has reported on this, and you can watch a video on the site to see how whispering affects you. Science has yet to weigh in on whether this "condition" really exists.

The writer Mavis Gallant passed away on Tuesday at age 91. Although she wasn't a household name, she was celebrated for her short stories that displayed great insight into the experiences of people who had suffered trauma. Many of her stories featured characters caught up in war or who were refugees.

Gallant’s works were informed by her own, sad beginnings. She was abandoned by her parents and sent to a convent school when she was four. Her father died when she was 10, and her mother, even after remarrying, wasn't interested in raising young Mavis. Daphne Kalotay, a writer and Gallant scholar, spoke to PRI’s The World about her literary idol. 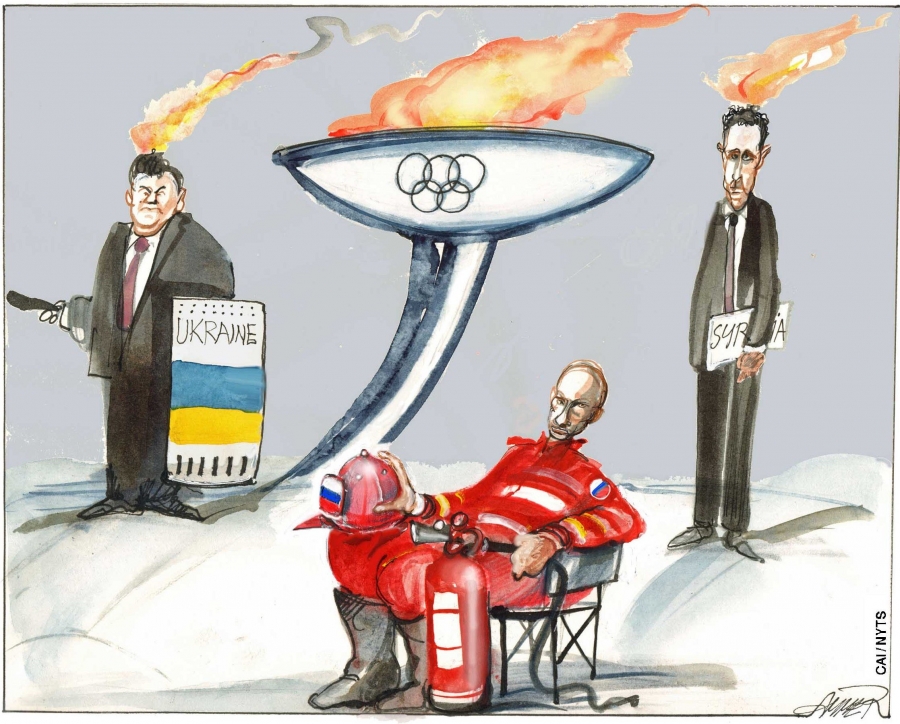 There's only one flame in this cartoon that Vladimir Putin wants burning but it's proven hard for him to put out the other two.