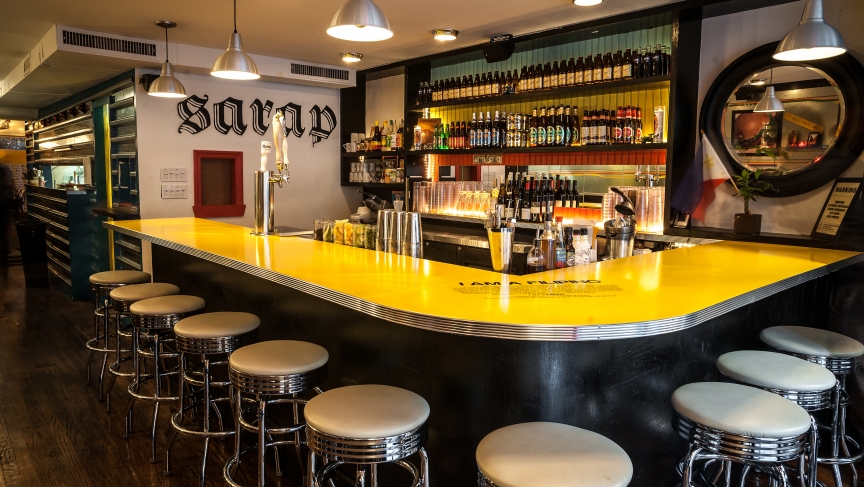 The bar at Jeepney, a Filipino gastropub in the East Village of New York City. "Sarap" on the wall means "delicious" in Tagalog.

One of the most visible ways that cultures mingle in America is through food. So it’s no wonder that when PRI's The World asked, as part of our Global Nation coverage, why Filipino cuisine hasn't spread like Thai or Chinese in this country, the reaction was strong.

We heard from Nicole Ponseca, who is on a mission to bring Filipino food to the American masses. She has created two New York City Filipino restaurants: Maharlika and its gastropub cousin Jeepney. Both opened in 2012, five blocks apart from each other in New York City's East Village.

“I’m doubtful that Filipino food will be on every corner, like Chinese or Thai food in New York,” Ponseca says. “But I’m curious about how other chefs will interpret Filipino food, who aren’t Filipino at all.”

So we asked Ponseca about the challenge of trying to introduce a new cuisine into this "global nation."

Why do you think Filipino food has not broken into the mainstream American restaurant diet?

Filipinos are the second largest Asian minority group in the United States, and in the top tier of highest educated and income. And we speak English in the Philippines — it’s a mainstream language for us. We fought in the US military, we were allies of the United States and had a military base. Yet we know food from Thailand, Korea, and Vietnam more than we know Filipino food.

Second, there’s a [Tagalog] word called hiya, which means shame. That’s why [some restaurants] give the "white-man menu" [to customers] because they think they’re not going to like dinuguan, which is a pork blood stew. But why have hiya when the French have boudin noir and the Spanish have morcilla? It is because when you’re colonized over so many years, you don’t value your own culture, even though we have so much pride.

How do you balance serving Filipino customers and a broader audience?

My first goal was to make Filipinos proud that we could have a restaurant that could cross over. We definitely face criticism day-to-day, even insofar as people being upset about having a non-Filipino waiter. Or a non-Filipino cooking the food. We have an African American in the kitchen — he’s awesome and part of the family, and he’s a great cook. And yet we were questioned about why he was in the kitchen.

It gets pretty deep. A family once felt disgruntled that we seated a white family before them, but little did they know that the white family had an 8 o’clock reservation.

Are your Filipino customers ever critical of your food?

@shefalikulkarni Great piece and so true. The best Filipino restaurant is my mom's house

Yet, there is that sense of pride and ownership. If you come from another culture to America, food is probably one of the last things you can hold on to and say, "It’s mine." So I am definitely sensitive to that, and yet, we have to continue as a business.

We treat it with friendliness and say, "Of course it’s not like your mom’s — who could cook like your mom? But we hope you have a good time here." We have to keep moving forward. If you look at our menu, we purposefully don’t call things "soy sauce chicken" or "chocolate stew." We purposefully do not dumb down names; we call it what it is in our language, Tagalog. I look to the French, Italian, Spanish and Japanese restaurants that don’t mince words. If it’s boudin noir, it’s boudin noir.

Has the restaurant industry changed to create more space for lesser-known cuisines?

Because they're all in NYC. "Why is it so hard to find a good Filipino restaurant?" http://t.co/yJTnsEfPq2

I’ve said this a million times and I always repeat it —  if it had not been for chefs like April Bloomfield and Mario Batali, and the influence in media of Anthony Bourdain and Andrew Zimmern, I don’t think the market would have been the way it is now. These chefs put spotlights on the use of pig’s blood or balut [duck embryo], or pig’s ear, or even pork belly, which now we see everywhere.

If it weren’t for them, I don’t think I would’ve been able to succeed as I have. They’ve opened the door for the use of offals — the cuts of meat that would be designated as peasant cuts, but they provide so much flavor and new ingredients to cook with.

Is it difficult for non-mainstream cuisines to find investors to help open restaurants?

The restaurant industry is one of the most risky and hard industries. Ninety percent of restaurants fail within the first year. So it’s hard to find an investor. The investor is either investing in the entrepreneurs themselves or it’s a vanity project.

But the food industry has also grown so much that we’re starting to look at niches. If you propose to an investor to look at a niche like Filipino food, what’s the track record? What case studies can I show that a modern Filipino restaurant — not a mom-and-pop or turo-turo [buffet style] — can exist? There have been a couple that are fusion, but I’m talking about a 100 percent Filipino restaurant. That is the challenge.

What are the obstacles for getting lesser-known cuisines onto American plates? Share your views in the comments below.