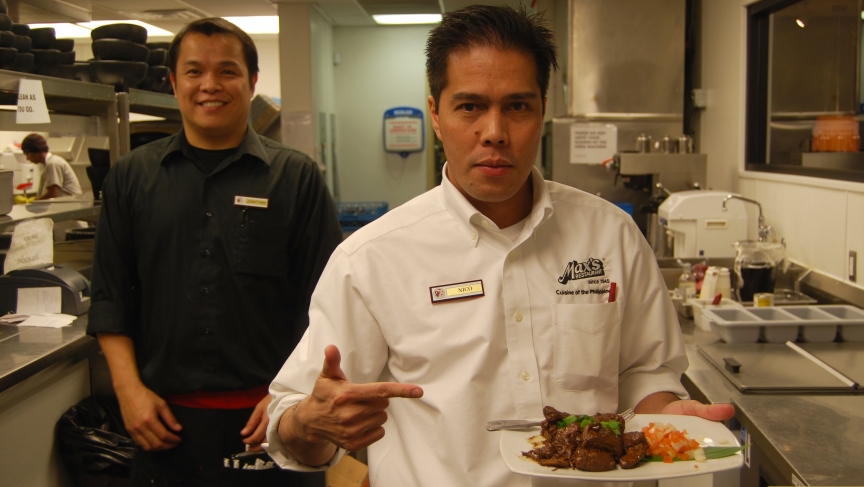 Nico Vidal is manager at the new Las Vegas Max's, a well-known Philippine chain restaurant that's opening new locations in the US and Canada. Vidal is holding a plate of Pinatuyong Pork Adobo.

Have you ever been to a really good Filipino restaurant in the United States? Odds are, you haven’t. It’s tough to even find Filipino food.

It’s curious because Filipinos are the second largest Asian population in the US. In a few cities, like Las Vegas, Philippine restaurants are starting to pop up, though. But before we dive into the restaurant scene in Sin City, first let's address this basic question: What exactly is Filipino food?

It’s hard to define, says Cathy Ferrer, a manager with Max’s Restaurant, "Cuisine of the Philippines."

“When you say Filipino food, it’s actually a fusion of many cultures and many countries,” Ferrer says.

Philippine food has Chinese, Malaysian, Spanish and American influences — all cultures that have shaped the Philippines. Filipinos eat a lot of rice, pork, chicken and, of course, fish — the Philippines is an archipelago of more than 7,000 islands, after all. All the food is spiced the Philippine way:

Ferrer helped open the new Max’s in Las Vegas a few months ago. The chain restaurant also has locations in California, Hawaii and New Jersey and has been serving food in the Philippines since 1945.

In Las Vegas, my hosts served me soft Pancit noodles and garlic fried rice and pork — cooked Philippine Adobo style, braised in soy and vinegar. And, of course, we had to have Max’s famous fried chicken.

It all tasted good, a bit heavy, but good. The restaurant was appealing. The servers were friendly. So what’s the problem here? Why aren’t more Americans eating Filipino food? Ferrer had one theory.

“We have a term that we call turo-turo: all food is already in a serving dish, and you just point to what you want,” she says.

Turo-turo, which means “point-point” in Tagalog, is buffet style. Max’s did away with that.

Here’s another problem, as I see it: the food didn’t taste all that different from basic Chinese food. So why switch?

Ferrer says her country’s food actually has quite a few surprises. She says she ordered me the “safest food” as a sampler.

Radke has tried a fair amount of Philippine food and has good things to say about it. He thinks it hasn’t quite caught on in the US because it's considered rustic, homey food.

"Every time I ask someone, 'What's the best Filipino restaurant in Las Vegas?' most people tell me, 'There really isn't one ... my mom's house,'" Radke says.

He also thinks non-Filipinos might be intimidated, scared off by the food. For example, in the Philippines, fish, sometimes big fish, are served with the head intact. It’s done that way in the US sometimes. To be fair, many other cultures serve fish this way, too.

Radke told me about a bowl of sinagang he recently had at Max’s.

“It’s kind of a sour stew, with really giant chunks of food in it, like whole shrimp and big pieces of bok choy. It’s like they didn’t bother to cut it up. It’s kind of clumsily assembled, but I say that with affection. It’s kind of fun to eat, also.”

I had the same soup. Staring at the shrimp, and it’s many, many legs, well, it was a bit off-putting.

“I think the average suburban Las Vegan would probably be terrified to see a whole shrimp in their soup,” Radke says.

For the record, Radke liked the soup, as did I.

So how exactly does an eclectic cuisine gain acceptance? How did sushi catch on? Thirty years ago, who would’ve thought Americans would develop a love affair with raw fish wrapped in seaweed? What will it take for Filipino food to get to that point?

“It’s hard to say,” Radke says. “There are a lot of Filipino chefs in Las Vegas. Maybe somebody will, kind of, go the extra mile to put it into some kind of a package that’s a little more friendly and approachable for people.”

Filipino-American Joe Elevado is trying to do just that — he’s the head chef at Andrea’s, an Asian restaurant at the five-star Wynn and Encore Resort on the Las Vegas Strip.

Chef Joe, as he’s called, has added a few Filipino dishes to the menu, mixed in with more well-known Chinese, Thai and Japanese choices.

Chef Joe made me a plate of pan-seared diver scallops with an eggplant puree to sample. After the scallops, I tried crispy pork shank pata, cooked Filipino style with spicy black vinegar and soy sauce.

The presentation was first-class all the way. The taste was great too — super fatty, but super good.

While I was sitting there digesting, loving this assignment, I started thinking that maybe cooks like Chef Joe can take Filipino food to the next level. Then, he made a confession.

“I do get people that come in and say, ‘Oh, this isn’t Filipino food,’ because I do try and refine it a little bit, if you will,” he says.

He says his biggest fans, and biggest critics, are Filipinos. Some complain that his food isn’t authentic enough.

Back at Max’s, Ferrer says they’ve also grappled with this.

“If you go to a Chinese restaurant, they do not change the menu. It’s a mainstream market that learns how to eat the food. So, as much as possible, we want that to happen,” she says.

That may happen in time, but remember, one of the most popular sushi rolls in America has long been the California Roll, a less-than-exotic sample. A sushi chef first came up with the idea to substitute avocado for raw fatty tuna in the 1970s, in Los Angeles.