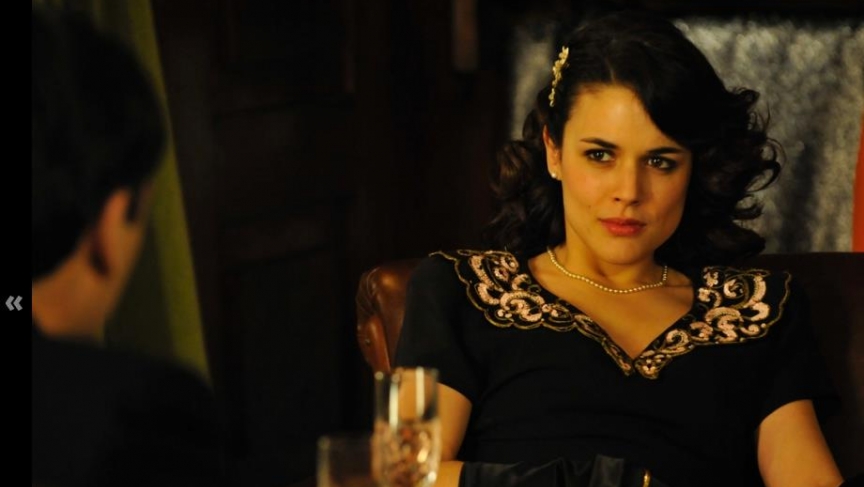 Adriana Ugarte plays Sira Quiroga, a seamstress turned spy in The Time Between Seams. It was the most popular TV drama in Spanish history.

Each Monday night, from September till January, a certain TV soundtrack was music to Amazon.com's ears in Spain. It was the theme to a TV series about a seamstress turned spy and, literally, as it aired, Amazon said sales of sewing machines soared.

The series, called The Time Between Seams in English, has set off a sewing renaissance among Spaniards.

The show starts out with this monologue, delivered by a beautiful young woman:

“My name is Sira Quiroga and I’m a seamstress. I never imagined that destiny would lead me to risk my life crossing a foreign city with an arsenal of pistols strapped to my body. But now I know that destiny is the sum of all the decisions we make in our lives. For me, it all began with something as simple as learning to thread a needle…”

Hooked? Join the club. The Time Between Seams turned out to be the most popular TV drama in Spanish history, with nearly 5 million viewers. That’s more than a quarter of TV watchers in Spain. It’s a full-blown period drama, set in Spain, Morocco and Portugal during and after the Spanish Civil War of the 1930s.

The show just ended. But it’s left a living legacy.

Just head over to a sewing supplies store called The Spider’s Web, the biggest in Valencia, Spain. In the back, gathered around a table, about a dozen women sew, darn and stitch during a free workshop. In one corner, there’s Laura, a young pharmacist who’s converting an old dress into a new skirt. She says she decided to learn how because of the fictional seamstress from TV.

“I like her character, she said. “It awoke something in me. Something that you normally associate with the older generation, with grandmothers.” Now, she said, it’s become fashionable to sew among young women.

At a nearby table, 29-year-old Victoria Romero is finishing up a handbag, stitching a seam by hand. “I just loved all the designs that Sira made,” she said. “The story of course is really interesting too, but the dresses, they were really impressive. Women’s clothes today have lost that femininity.”

This is the new — the brand new — generation of Spanish seamstresses. And it’s growing by the week, says the owner of The Spider’s Web, Maria Jose Manioc, in workshops like these and online via popular blogs and Facebook pages. There’s even talk of an exhibition in Madrid of the dresses Sira the seamstress designed on the show.

“Now if they’d only start a TV series about needlework or crocheting,” she laughed, "business would really be booming!”

Business on Amazon.es, the Spanish branch of the online giant, has certainly been booming. The company recently said that it’s seen about a 150 percent spike in sewing machine sales each and every Monday when the series aired.

Some have said this is a sign that Spain’s tattered economy is turning a corner. You know, more people spending on pricey items. But the women at The Spider Web’s workshop say just the opposite is true: people are simply looking for ways to make their old clothes last longer. To feel more self-sufficient, even as they have less money.

In Spain, it turns out even the sewing machine vendors are having a rough time. Amazon’s success, said Juan Galdon, is his loss. Galdon sits in his cluttered sewing machine store with his arms crossed, waiting for customers. And waiting.

I asked him if sales were booming.

“You know,” I said, “because of the TV series with Sira the seamstress?”

“I didn’t watch it," he said. “Didn’t interest me.  A lot of vendors who come in make the same comment. ‘Hey, you must be selling more machines because of that show.’ But it’s not true.”

The crisis has hit hard here, he said. Online stores are selling more because they sell at such low prices.

The only uptick Galdon said he’s seen is in repairs — a further sign, he suggests, that people are hanging on to what they have. Which is ultimately what Sira, the seamstress heroine, does. But let's not give too much away.