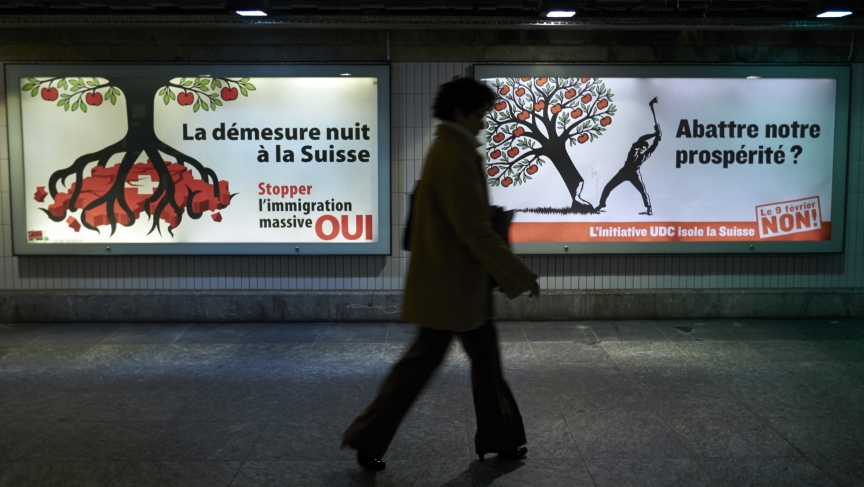 Posters for the 'yes' and 'no' campaigns in Lausanne.

The Swiss voted in a tight ballot initiative to limit immigration from European countries. Now, France and Germany have voiced concern about Switzerland's vote for strict quotas for immigration.

Final results showed just 50.3 percent of Swiss voted in favor of the restrictions. The vote invalidates the Swiss-EU agreement on freedom of movement.

While fiercely independent Switzerland is not a member of the EU, it had adopted large sections of EU policy.

An editorial in the Swiss German-language newspaper Neue Zürcher Zeitung calls the vote a “turning point for Switzerland.”

“What the result means for the relationship between Switzerland and the European Union is yet to be determined, but it seems certain that it won’t be good for the Swiss economy and thus for the prosperity of the Swiss," writes Markus Spillmann in the Swiss daily.

Switzerland's neighbors are concerned, too.

“The leaders of the [Swiss] government and economy will have their hands full to contain the negative consequences of the vote against 'mass immigration' for the collaboration with the EU,” writes Jürgen Dunschin the German daily Frankfurter Allgemeine Zeitung.

German Finance Minister Wolfgang Schäuble said the vote would cause "a host of difficulties for Switzerland."

France's foreign minister, Laurent Fabius, described the outcome of the Swiss referendum as "bad news" and said France would "review its relationship with Switzerland."

The European Commission also voiced regret and said it would now "examine the implications of this initiative on EU-Swiss relations as a whole."

The United Kingdom has seen a lively debate about immigration lately and, predictably, the Swiss vote was “hailed as significant victory by the UK Independence Party, which said it showed how countries with concerns over immigration could stand up to 'bullying' from Brussels,” as the British Telegraph reports.

France's right wing National Front, expected to do well in France in the European elections in May, also congratulated the Swiss voters on the result. Similar anti-immigrant parties are popular in the Netherlands, Austria and Scandinavia.

Many people in Switzerland and elsewhere went on social media to voice their frustration with the Swiss referendum: