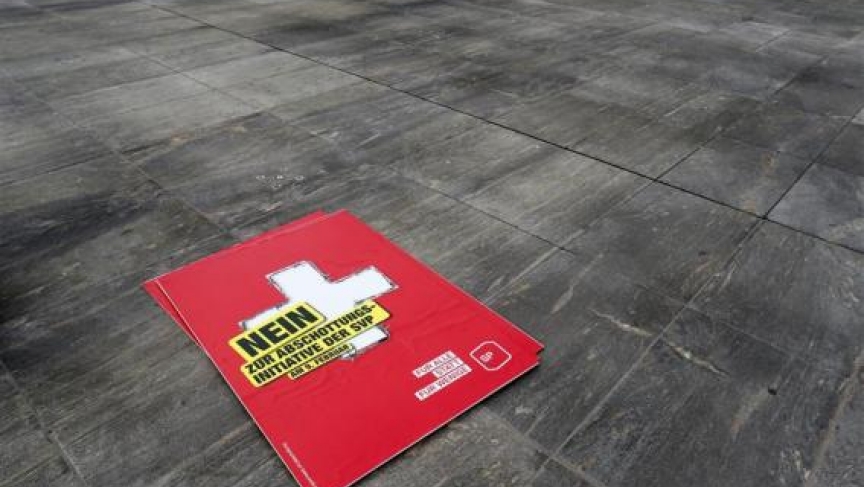 A poster against the "mass immigration initiative" of the Swiss Socalist Party SPS is seen on the Federal Square before a campaign in Bern.

As every school kid knows, Switzerland is a neutral country. Its image basically is: plays well with everybody.

But over the weekend, Swiss voters sent a very different message. They approved a system of quotas on immigrants entering the country.

That has upset the European Union. Even though Switzerland is not a member of the EU, it has signed an agreement with the EU allowing the free flow of people across its borders.

Critics say the vote, approved by just 50.3% of those voting, signals a growing Swiss intolerance toward immigrants.

"This is the result the Swiss government and business leaders most feared: support for immigration quotas, by the tiniest of margins," says the BBC's Imogen Foulkes. "In Switzerland, the voters' word is final, and the government will now have to inform the European Union that it wants to renegotiate its bilateral agreement on free movement of people. But renegotiation is almost certainly not an option."

Foulkes says the vote is likely a reaction to a much larger influx of immigrants thaN people expected. "Since Switzerland opened its borders to European Union, immigration has increased. There is no arguing about the statistics. The Swiss had expected about 8,000 new people every year with opening their borders to the EU, instead they are getting around 80,000," she says.

"Now, it is true that there is a market for highly-skilled people in Switzerland, and also for non-skilled doing jobs that the Swiss don't want to do anymore." Still, that large flow, even if useful for the economy, created a reaction, says Foulkes.

"It has made at least half of yesterday's voters, anyway, feel uncomfortable that their country is maybe changing too fast, that the country is too crowded, that there is pressure on schools, on hospitals, on public transport [and] things like that."

The many Swiss who voted against the measure fear the consequences of it. Business leaders, Foulkes says, "want to be able to recruit European workers. Many young people in Switzerland are dismayed because they want to be able to go to Europe and work freely. They may no longer be able to do so. And the Swiss government is working out how it is going to explain to Brussels that it has opted out of a very fundamental part of policy which may affect its other crucial trade ties with Europe."

And the business aspects could be dire if the EU reacts. "Now, exclusion from that market could spell disaster for Switzerland's booming economy, since over half of all Swiss exports are sold in the EU," she says. "What's more, Swiss employers increasingly rely on highly qualified staff from across Europe — they believe they will lose their competitive edge if they are no longer free to employ who they like."

Despite the uncertainties ahead, Foulkes says the right-wing Swiss People's Party is jubilant that its claims of overcrowding, and pressure on Swiss jobs, salaries and housing, found favor with voters.

"The big question now is, how will Brussels, already under pressure from full EU members like Britain over the impact of free movement, react?"