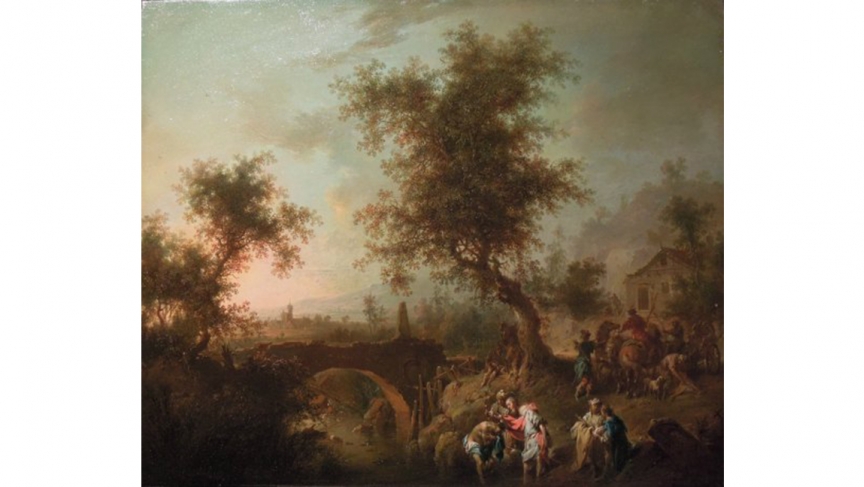 The painting "St. Philip baptizing the servant of Queen Kandaki" by Johann Conrad Seekatz, lost during World War II, will return to Poland.

Consulate General of the Republic of Poland in New York,

It sometimes takes a while for stolen paintings to come home. The Nazis looted Poland's National Museum in Warsaw 70 years ago, during World War II.

Among the many works of art that went missing was a painting by an 18th-century German artist.

On Thursday, US Special Agent in Charge of Homeland Security Investigations James Hayes returned the painting to Polish diplomats in the US. And the timing of the return may have had something to do a with new movie.

"It gives me great, great pleasure to be able to return to the people of Poland this valuable painting that was stolen more than 70 years ago during World War II. Stolen art, antiquities, and fraudulently-acquired artifacts, these are the little known casualties of war," he said. "We are deeply grateful to return this cherished painting to our partners from the Republic of Poland.

"Homeland Security Investigations will continue to work tirelessly to track down objects stolen during World War II and return them to their rightful owners," he added.

The oil-on-copper painting, titled St. Philip baptizing a servant of Queen Kandaki, was created by German artist Johann Conrad Seekatz. The Nazis occupied Warsaw from 1939 to 1945, along with much of the rest of Europe. When they occupied a country, they often took cultural works of significance and brought them back to Germany. Sometimes, they destroyed or removed works as they withdrew in the face of Allied attacks.

US officials apparently timed the repatriation ceremony to coincide with the release of a new Hollywood movie, The Monuments Men. The film recounts the true story of a US military unit of art historians assigned during World War II to recover artwork stolen by the Nazis and return it to the original owners.

Poland's Consul General in New York, Ewa Junczyk-Ziomecka, said the work of art was recovered thanks to the cooperation of Polish diplomats and federal agents from Immigration and Customs Enforcement/Homeland Security Investigations (ICE/HSI). "During the second World War, Poland suffered vast personal and material losses. Six million people were killed, including three million Polish Jews. The cities were destroyed, and all that represents and constitutes national identity had been looted," Junczyk-Ziomecka said.

"Even though it has been 70 years since the war concluded, the Polish heritage is still scattered around the world. Because of that, the consequences of the war are still visible — they do not expire. "

Bogdan Zdrojewski, Poland's minister of culture and national heritage, said she was very happy a painting that had been lost to history was recovered. "We treat every painting, every sculpture,  every historical artifact with utmost importance — they are the missing pieces of a puzzle that make up the Polish national heritage," she said.

"I would like to thank the US authorities involved in this difficult and timely process for their cooperation with my services that deal with wartime losses at the Ministry of Culture and National Heritage. It is our common success."