People participate in the so-called "Last demonstration with illegal marijuana" on their way to the Congress building in Montevideo, as Uruguay's Senate debates a government-sponsored bill establishing state regulation of the cultivation, distribution and consumption of marijuana during December 2013.

Uruguay’s President José “Pepe” Mujica has been nominated for the Nobel Peace Prize for the second year in a row — for legalizing marijuana.

Mujica argued that legalization, with government regulation, was the only way to end the criminal activities around the drug in Uruguay. The president was nominated by members of his party, the Frente Amplio, a German non-governmental organization and the Drugs Peace Institute, based in the Netherlands. The Institute also praised his decision to embrace democracy after spending 14 years in prison for armed guerrilla activities, as The Huffington Post reports.

Take the luge to Central Park

The New York TImes imagines with illustrations how New York City might handle the winter Olympics if it had the "hubris" to apply for the games, instead of the Summer Olympics that it tried and failed to get.

It would take an Alpine events hill in the middle of Central Park — twice as tall as the Empire State Building and stretching from 59th Street to 101st Street. Or how about a luge that weaves between skyscrapers before finishing in Times Square? New York may have a lot of things, but the Winter Olympics probably won't be one of them.

That's some kind of beach discovery

12-year-old Xavier Lim was hunting for seashells with his father on a beach in South Tasmania, Australia, when they came upon a giant, quivering mass. It measured about five feet across.

It turned out to be a new species of giant jellyfish. Although it’s not completely unknown — several had been sighted in the ocean in the past — it had never been named and classified, so it is new to science, according to the Australian Broadcasting Company.

Walk down Kappabashi Street in Tokyo and you'll be surrounded by mouth-watering displays of sushi and noodle dishes. Unfortunately, you can’t eat any of it. The street is the center of the fake food industry in Japan.

More than a dozen shops sell replicas of food, from ingredients to complete chef-created dishes. The imitation foods are used to advertise the different dishes offered by restaurants to foreigners who can’t read Japanese. The tradition dates back to World War II, as PRI’s The World reports.

Cheesemaking returns to the Democratic Republic of Congo

The former Belgian colony, once known as the Congo, then Zaire and now the Democractic Republic of Congo (DRC), used to make its own cheeses, including camembert and mozzarella. But the craft disappeared during the country's recent civil war.

In 1975, Belgian priests set up cheesemaking factories in the eastern part of the country, as well as in Uganda and Rwanda. In the 1990s, the cheesemakers fled as the area became engulfed in conflict. Now, Andre Ndekezi has returned and is making a local cheese in bathtubs. The BBC went to meet him and describes the production of his Goma cheese, named for the biggest town in eastern DRC.

There's design behind those Sochi signs pointing you to games, and restrooms

The Olympics provide a rare challenge to those who design signs. They have to come up with universal symbols that are beyond any single culture or language. And it helps if the symbols have a bit of flair.

PRI's The World tells the story of the man considered the "grandfather" of Olympic pictograms. He's a German that worked hard on the 1972 Olympics in Munich to erase the images, and any hint of propaganda, left over from Hitler's Olympics in 1936. You'll find his pictograms and a video showing those inspiring the 2016 summer Olympics in Brazil.

Dear Internet, We, as people from Turkey, had a great time with you. But we have to say goodbye. https://t.co/K3V2t0Z7DI

Japan is bracing for as much as two feet of snow this weekend. A foot of snow is forecast for Tokyo. All that snow, and rain in lower and warmer latitudes, is expected to bring flooding, according to AccuWeather, especially in the area of Osaka. 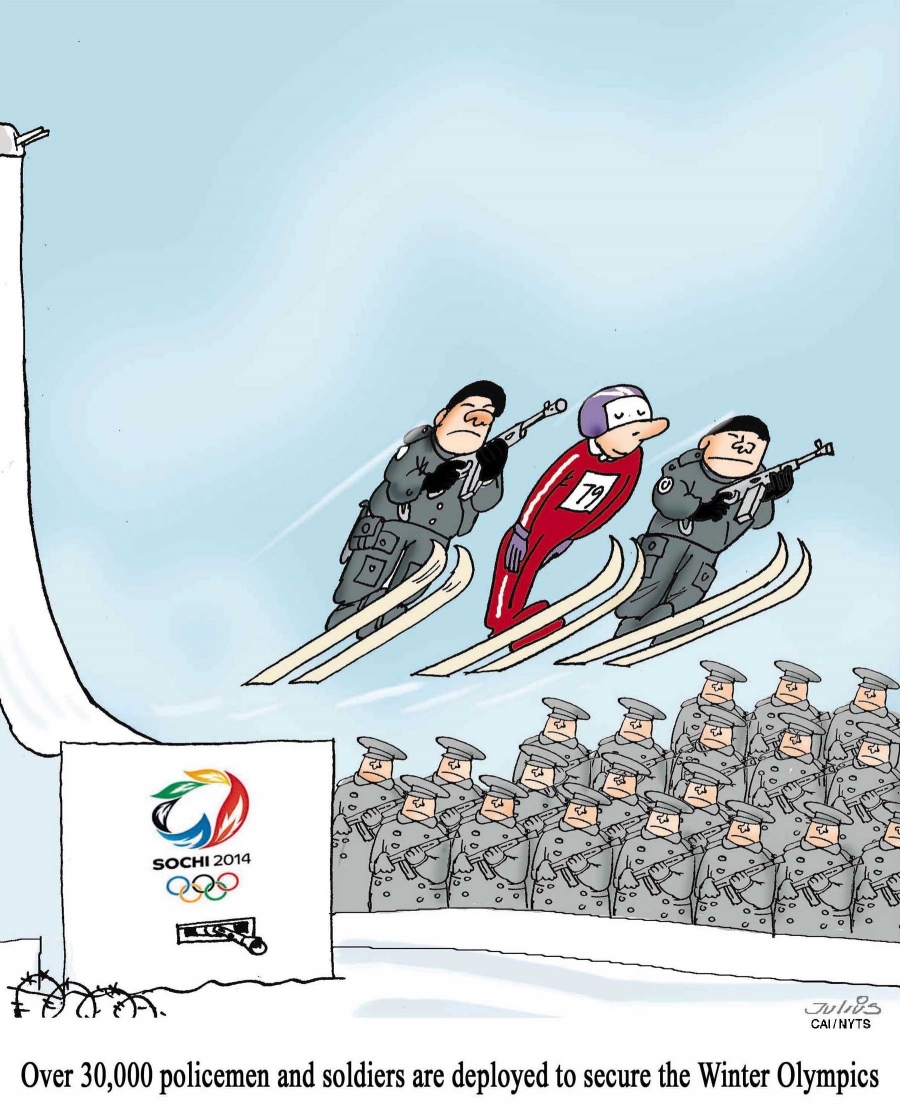 Soldiers, a Russian air defense system, massive concrete check points and sniffer dogs are all part of the Winter Olympic Games at Sochi.