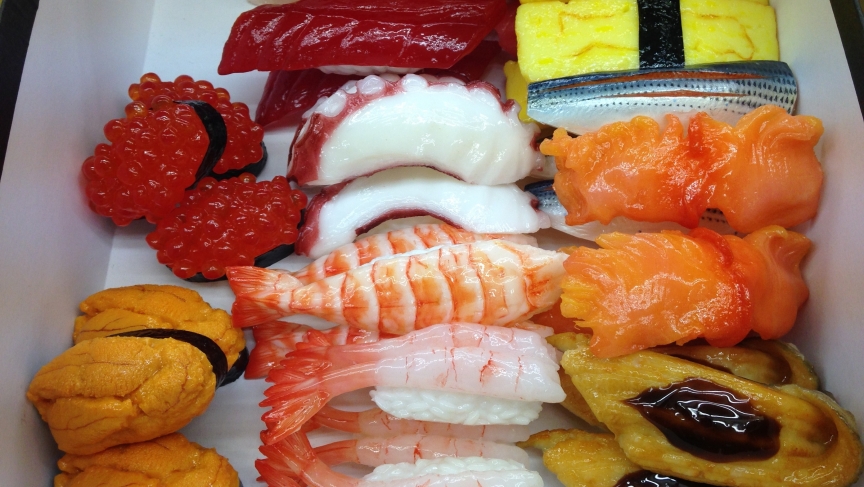 Peek into the shop windows on Kappabashi St. in Tokyo and your mouth will start to water. Bowls full of ramen, burgers, the freshest sashimi in Japan -- it’s all there for the taking, except, it’s all fake.

Kappabashi St. is the epicenter of the fake food industry in Japan where more than a dozen shops crowd the street selling plastic fruit, vegetables, noodles, sushi, French fries --- anything edible that you can imagine.

“If you can eat something on this planet, it can be replicated in Tokyo,” said food writer Steve Dolinsky.

Dolinsky is currently in Japan visiting Kappabashi St. and investigating this fake food industry. When you go out to a restaurant in Japan, very often you will find plastic models of each dish on the menu on display.  According to Dolinsky this tradition goes back to World War II.

“After World War II a lot of Westerners started coming to Japan and they couldn’t really understand the local food the soba, the udon, the traditional food here and the Japanese couldn’t figure out the hamburgers and hot dogs were, so they had to figure out a way to illustrate it,” said Dolinsky.

“Genius marketing was to put the flashy replica food outside, so the kids would beg mom to take them inside.”

Dolinsky visited one of the best-known fake food factories, Maiduru. The factory, more like an artisan’s workshop, has been open since 1948 and is famous for handcrafting models in excruciating detail. Artisans make around 100 pieces per day. The models used to be made out of wax but today they are made out of plastic.

When a restaurant wants replicas made of some of its dishes, chefs will actually send the dish to the factory and when they can’t deliver the dish by hand, they will even mail it. This is not just for restaurants in Japan, says Dolinsky, this is for restaurants all over the world.

“If you’ve been to an Asian restaurant anywhere in America, you’ve been to Chinatown somewhere and you see all that plastic food in the window, chances are it came from Kappabashi St.”

These aren't pre-packaged meals either. Every order comes special made says Dolinsky.  There are boxes upon boxes of thousands of "ingredients" in in the factory from different kinds of mushrooms, to cooked shrimp, eggs --- anything edible you can imagine.

Special orders can be made in two weeks and the price tag isn’t exactly cheap.