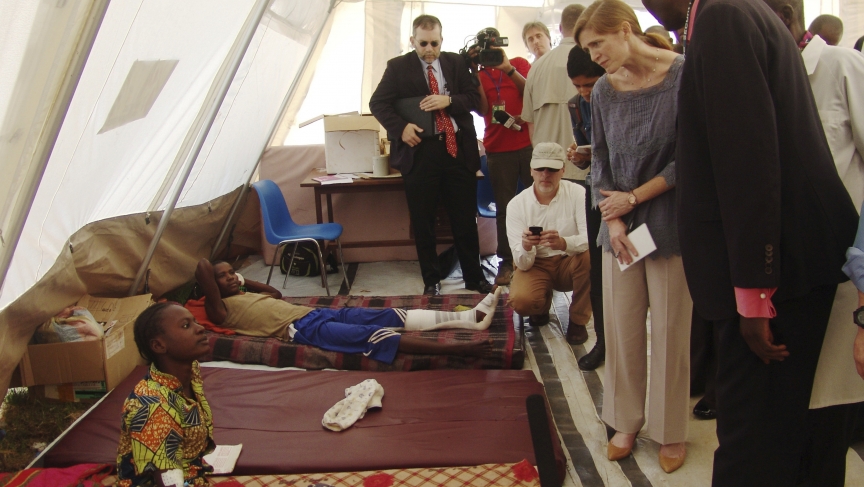 US Ambassador to the United Nations Samantha Power visits a community hospital in Bangui December 19, 2013

Those were the words uttered by many world leaders after the Rwandan genocide in 1994, when ethnic Hutus killed hundreds of thousands of ethnic Tutsis. But atrocities continue to happen today — in places like the Central African Republic and Syria.

Samantha Power wrote about America's response and understanding of atrocities in her book "A Problem From Hell: America and the Age of Genocide." Power looked at why the US government has historically been ineffective at stopping crimes against humanity.

But Power moved into politics, first as a White House adviser, from 2009 to 2013, and now as UN ambassador.

One of the first challenges Power had had to tackle when she became the US Ambassaor to the UN was the developing violence and political instability in the Central African Republic.

"The response was slower than one would like," Hamilton said. "As is often the case, policymakers in Washington knew about the situation as it started evolving and for a long time they thought, the [CAR] has faced coups in the past and it hasn't led to societal collapse. But once it became very clear to them in December last year that this was moving into a clear atrocity situation, the response has been unprecedented, actually."

In December, the Obama administration announced that the US would provide up to $67 million to support French and African Union troops moving into the Central African Republic in the name of humanitarian intervention. And while the death and violence hasn't stopped, it has been limited. Unlike in Syria, where the latest reports of the use of barrel bombs come with stories of scores killed.

And Power has struggled to at all stop the growing humanitarian crisis in Syria.

"Unfortunately, Syria is the case that shows the problem with her original thesis," Hamilton said. "I think she was too quick to dismiss this question of influence, too focussed on America at the cost of other players in the global system."

Hamilton writes that Russia's and China's protection of Syrian leader Bashar al-Assad has highlighted the diminishing power of the US when it comes to global intervention.

A summary on a previous version of this story gave an incorrect title for Samantha Power. She's the US Ambassador to the United Nations.