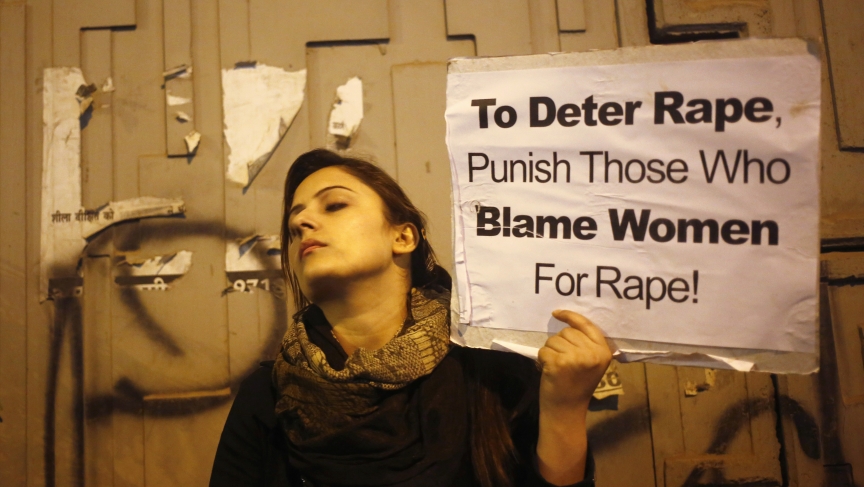 A demonstrator holds a placard as she attends a candlelight vigil to mark the first anniversary of the Delhi gang rape, in New Delhi December 16, 2013.

Asha Mirje, a member of India's Nationalist Congress Party told women they should be careful not to invite rape.

She made that comment at a party event when a young woman asked her about growing concerns over women’s safety in India. Mirje is also a gynecologist and a member of Maharashtra’s Women’s Commission, a body that was designed to voice women’s concerns and issues.

“Girls should be careful about what they wear. They should mind the time of their moving out. Girls' body language should not be such that it invites attention of a potential rapist lurking around," she said according to a report by the Times of India.  She also said girls should think carefully about whether wherever they’re going is safe, whether it’s wise to go out late in the evenings or to places that are relatively empty. (You can see a TV report on her comments as well.)

Rape and sexual assault have been hotly discussed issues here, especially since the brutal gang rape and murder of a 23-year-old physiotherapy student in December 2012 sparked widespread protests around the country and demands for better laws and law enforcement to protect women from sexual violence.

Mirje also had questions for the victim of that gang rape, which has now come to be known as the Delhi gang rape.

“Did she have to go to a movie at 11 p.m. with her boyfriend? She could have gone for a matinee or an evening show,” she said. Here, Mirje actually has her facts wrong. The victim and her friend left the movie theater about 9 p.m. They boarded the bus where the assault took place about 9:30 p.m.

Having grown up in India, I can tell you that her attitude is far from uncommon here. Mothers, fathers, brothers, uncles, aunts, teachers and neighbors alike have, for decades, perhaps centuries, told young girls to be careful about how they dress, where they go and when they go there — if it’s necessary to go out at all. In essence, the vast majority of Indian girls are taught from a very young age to try and be invisible in public spaces. And even a just a couple of years ago, many politicians and leaders made similar public remarks.

But, what’s different about India today is there was a huge public outcry at her remarks. Women’s rights groups and politicians branded her remarks as “insensitive.” And her own political party distanced itself from what she said. In the end, Mirje backtracked and apologized for her remarks.

"If anyone was hurt by my statement, I am really sorry,” she said. She also added she was merely giving “motherly advice” to the young women at the conference.

Until two or three years ago, leaders have openly said similar things but no one was made to apologize. And that, so far is India’s biggest change in culture. The protests that followed the Delhi gang rape has led to change in the culture of victim blaming. You may think what you please, but it is not longer politically correct to blame the victim. And women here in Delhi have noted this to me again and again. (I wrote about this in December 2013 on the anniversary of the Delhi gang rape. You can find that piece here.)

We, as a country, still have a long way to go to reduce the number of cases of sexual assault on women. We still have a long way to go to ensure women walk freely, without constant fear. But as the recent controversy over Mirje’s remarks suggest, we’re moving in the right direction. People like Mirje can think that rape is a woman’s fault, but they can’t get away with saying it. If what newspapers here are reporting about Mirje’s impending expulsion from the Women’s Commission is correct, the price for such remarks can be heavy. And that’s how it should be.