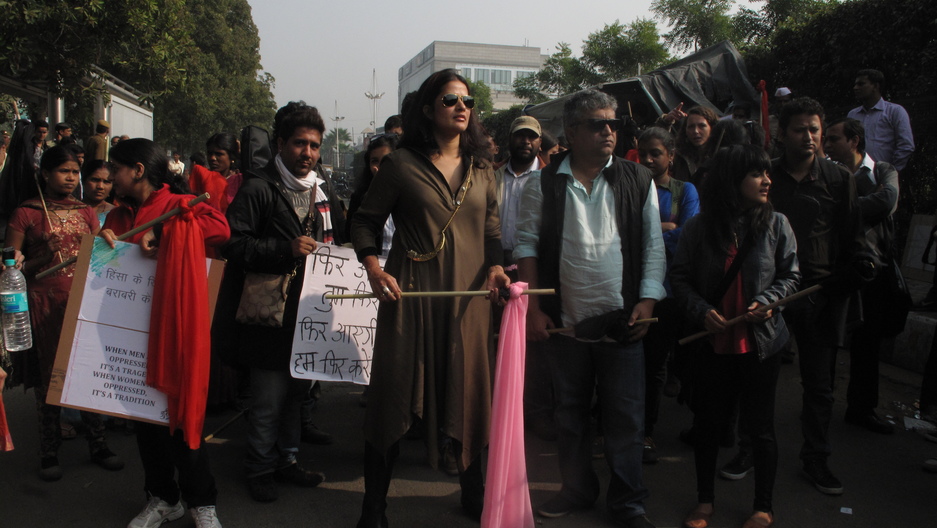 A group of musicians and activists gathered outside a mall in New Delhi, where the victim of the horrific gang rape on December 16th, 2012 had watched Life of Pi barely a couple of hours before the incident.

Last year on this day, I was in Boston, Massachusetts. News about the brutal gang rape of the 23-year-old physiotherapy student had started trickling in on my Facebook feed.

In the days and weeks that followed, my colleagues and I at The World covered the story as best as we could from a distance. But what I wanted at the time was to be in New Delhi, to stand with my friends and all the strangers who were protesting in the streets. I felt their anger and frustration from thousands of miles away. When Nirbhaya, as the victim was called by the Indian media, died, I felt the collective grief of a nation.

Today, I am in New Delhi. I moved back after 11 years in the United States. Attending events to commemorate the horrific incident a year ago, I realized that the India I’ve returned to is different from the one I’d left, with regard to its tolerance for violence against women.

When I was growing up, even women didn’t always discuss sexual harassment amongst themselves. If they did, it was in hushed tones, tainted with notes of shame. Parents, older friends and neighbors warned girls as soon as they were teenagers that they had to be careful, that they shouldn’t take chances with where they went and when, that men were bound to be men and misbehave. It was you, the girl or the woman, who had to be careful not to invite trouble.

But outrage over the harassment? No. Very rarely did I encounter it growing up, except thankfully at home, where my mother, father, and brother were equally vociferous in their intolerance for such behavior. (Perhaps that’s what nurtured my own anger and outrage.)

Yet today, as India looks back on what has changed in the past year, time and again young women in Delhi tell me one thing: "It is no longer acceptable to blame the victim. You may think it’s the victim’s fault, but you can’t say that out loud without being publicly shamed." For example, when a senior politician, Farooq Abdullah, made a recent comment about how he is now afraid to even speak with women lest they accuse him of sexual harassment, it drew such fierce criticism that he had to immediately issue a public apology.

As I reported last January, the Delhi gang rape forced people in India to accept that the problem exists, and boosted the public discussion about it. A year later, people feel a significant change in the culture around gender-based violence.

“We have seen a new confidence, we have seen a new discourse, we've seen the breaking of denial around sexual violence in India,” said Vrinda Grover, a Delhi-based human rights lawyer known for her work on gender-based violence. She was part of a committee that helped reform rape laws earlier this year. The reforms include a new law against sexual harassment in the workplace, which requires all employers to have a committee to deal with cases of sexual harassment when they come up, in addition to filing a complaint with the police against the alleged perpetrator, when the need arises.

The public discourse on the issue and the legal reforms have made a difference, says Grover.

“We have seen the rupturing of silence. And we have seen women step out of the circle of shame and stigma. And women today, with the support very often of their husbands and families, are reporting confidently against sexual violence and sexual harassment.”

That may explain why the number of registered rape cases went up in Delhi in the past year. Still, as Grover also says, “the violence and the impunity continue unabated.”

There are several reasons. One is that India can (and often does) have the best laws in the world, but implementation is where many things fail.

To begin with, the police are still hesitant to lodge complaints and are not sensitized to the issue. That's especially true on the lower rungs of the police force, says Sehba Farooqui, the secretary of the Delhi chapter of the All India Democratic Women’s Association.

She says most policemen still “never accept at one go that someone was indeed a victim of violence.” Here, the culture of victim blaming seems to be alive and well. As a result, it creates a “hostile environment for victims,” said Farooqui, especially if the victim is from a lower class.

Like the police, the judiciary has yet to become as responsive to these issues as one might expect. Cases of sexual violence remain stuck in courts, years on end. And perpetrators often roam free, encouraging impunity.

“Simply changing the law does not alter the access to justice, or make justice more sensitive to the concerns of women,” says Grover. “What we're seeing is the institutional response to women's concerns is extremely weak.”

Changing that is going to take a long time and serious effort by the government.

Does that kill my hopes? No. As Farooqui told me on the phone a couple of days ago, the process of change has begun, and it won’t turn back. There is already a difference in people’s attitudes, she said. And that’s a “big and positive change.”

“Societal changes take time,” she said. “It might not happen in my lifetime. But certainly within the next couple of generations.”