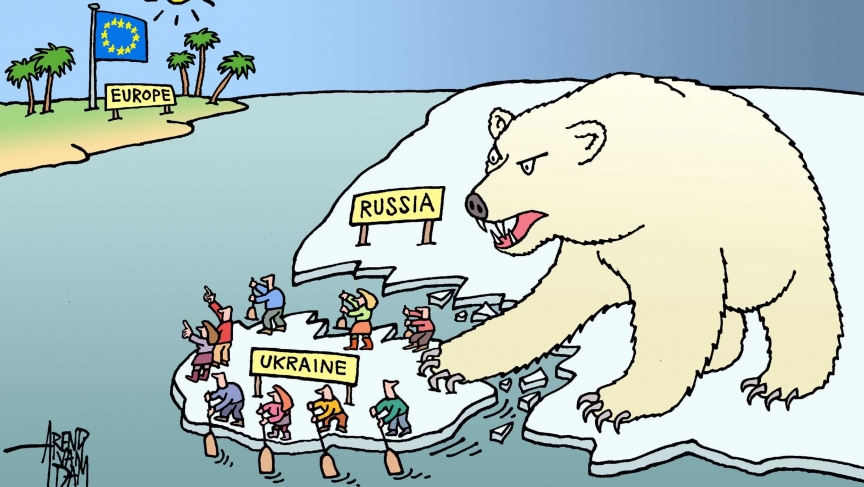 Rooooooaaaaaaarrrrrrr! The proverbial Russian bear extends her paw to try to keep Ukraine in the Kremlin fold.

Ukraine is tense. Protests have been escalating and four activists have died. There are rumors, denied by officials, of Russian riot police being dispatched to the Ukraine.

The European Union is pushing the Ukranian government to keep its promises of closer ties, while Russia's foreign minister is warning European officials not to encourage Ukranian protesters.

The protests began when Ukrainian President Viktor Yanukovych dropped a trade deal with the EU last November to take a $15 billion bailout from Russia. Protesters are getting bolder, despite their fears they may be physically harmed for taking part, reports Deutsche Welle.

A doctor from New Zealand made headlines in Australia after fighting off a shark, stitching up his own wound and heading to a bar — where a bartender asked him to kindly bandage his leg because he was bleeding on the floor.

James Grant did that, and presumably finished his drink, before heading to the hospital on Saturday after the attack happened. The 24-year-old was standing in two feet of water when he felt a tug on his leg and instinctively lashed out with a knife. He was left with roughly two-inch cuts on his legs that he sewed up using thread from his first aid kit. He was back to work on Monday, the Sydney Morning Herald reports.

You can still have class, even if you are working class

That sounds like a beer ad... and now it is. A new Guinness ad features a club of fancy-dressing working men from the streets of Brazzaville, the capital of the Republic of Congo.

PRI's The World has photos and a story about men in the "Society of Elegant Persons" — a social club left over from the 1920s, when the Congo was a French colony and Congolese were fascinated by French fashion and sophistication. The men have ordinary jobs, as policemen, street vendors or miners, but sport fancy threads like canary yellow suits, cowboy hats, and alligator boots, sometimes costing thousands of dollars. Don't miss the Guinness ad at the bottom of the story.

This can't be a promising sign for peace in Ukraine

Over the weekend, Pope Francis joined two children at the balcony of the Apostolic Palace to release two peace doves, to mark the end of the Vatican's annual Caravan of Peace festival. But rather than soaring off into a peaceful new future, the doves were set upon by a seagull and a large crow.

The two birds escaped, but there were definitely some lost feathers — and no word on the severity of their injuries. Pope Francis had just called for peace in the Ukraine, where protesters have been locked in an increasingly violent struggle with government officials. The Independent has photos and videos from the event.

A colleague pursues the truth about Daniel Pearl's murder

Daniel Pearl, the Wall Street Journal reporter, was kidnapped by Pakistani militants linked to al-Qaeda and killed a dozen years ago. Three people were convicted of his murder, but a colleague and friend of Pearl's wasn't satisfied that justice had been done. So she set about finding all the people who were responsible for his death. In an interview with To The Point, Asra Nomani talks about the quest she went on to map out those involved in Pearl's final days.

Actor who portrayed the Marlboro Man dies from lung disease at 72 http://t.co/wTkD9rvhPL #TV