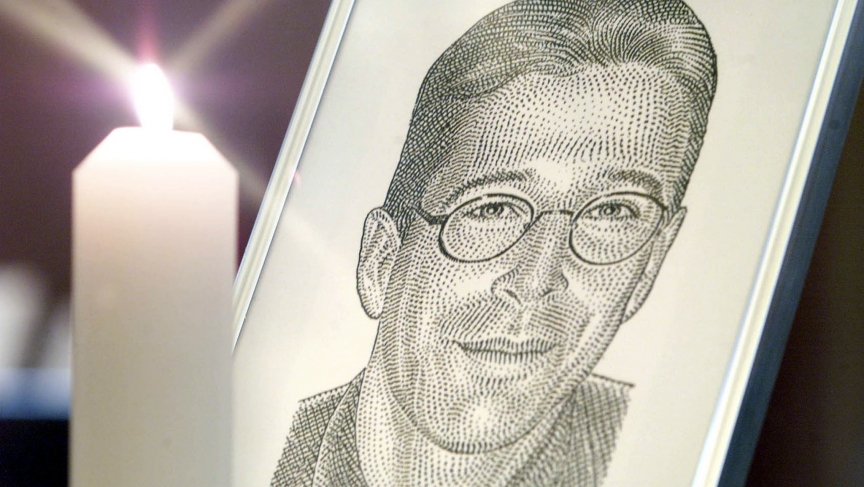 A portrait of the Wall Street Journal's reporter Daniel Pearl stands with a candle at the altar at Fleet Street's journalists' chapel at St. Bride's Church prior to a memorial service in London March 5, 2002.

In January 2002, Wall Street Journal reporter Daniel Pearl thought he was headed for a routine interview in Karachi, Pakistan. But that interview was to be his last. A month later, the FBI received a video showing his gruesome death. It ended with Pearl’s killer holding his decapitated head.

By now, many people know the story of Daniel Pearl. Some have seen the grainy video of his demise. But to Asra Nomani, he was “Danny” and a colleague, close friend, and partner on the volleyball court.

Nomani has just published a long narrative in The Washingtonian about trying to solve the mystery surrounding his death — a search that has consumed her since the night he disappeared.

“That summer, four men were convicted in Danny’s kidnapping and murder, but what I realized over the years was there were many other men who were suspected of being involved,” she says.

Nomani went on to co-found the Pearl Project at Georgetown University in 2007, with the goal of getting to the bottom of who was responsible for his kidnapping and death, as well as finishing the final story Pearl was reporting when he vanished.

“I wanted to find the truth that was left behind,” she said. “When Danny wasn’t brought back, there was the sadness that we had — sort of like Marines feel, I think, where you never want to leave your buddy behind. We couldn’t save his life, but as journalists, we’re trying to find the truth of the most horrific [tragedy] in this world. And that’s what I had to find out for myself.”

Ultimately, the FBI provided a dramatic clue: a much clearer version of the video showing Pearl’s murder. It held a detail that Nomani believed was key. “This idea that the hand of the man who held the knife that killed Danny had distinguishable vein patterns — and those same vein patterns had been noticed on the hand of Khalid Sheikh Mohammed, the man who had confessed to committing the 9/11 attacks,” she said.

In fact, in March 2007, the US government released a transcript of a Guantánamo hearing in which Khalid Sheikh Mohammed admits to killing Pearl. “I decapitated with my blessed right hand the head of the American Jew, Daniel Pearl, in the city of Karachi, Pakistan,” he reportedly said. “For those who would like to confirm, there are pictures of me on the internet holding his head.”

He was not alone, though. The Pearl project has documented [pdf] roughly a dozen people it says were connected to Pearl's kidnapping and murder who remain free.

Looking for closure, Nomani traveled in 2012 to Guantánamo, where a military commission was set to arraign Mohammed and four other men for the World Trade Center attacks. She recalled watching the court proceeding, but not being able to look at Mohammed’s right hand.

“For many many hours, I kept looking at his face, at his mouth moving,” she said. “Slowly the camera would focus and I kept wishing for it to focus clearer and clearer. Finally, I saw his hand. I believe it is the same hand I saw in the murder video. This is not the kind of evidence that would convict a defendant in court, but in my heart, this is what I saw.”

Despite Mohammed’s confession, charges related to Pearl’s death are not likely to play a part in the government’s case. The 9/11 court proceedings are expected to take years. But Nomani said she hopes information about Pearl’s murder can be presented at sentencing, if nothing else, as a testament to Mohammed’s character.