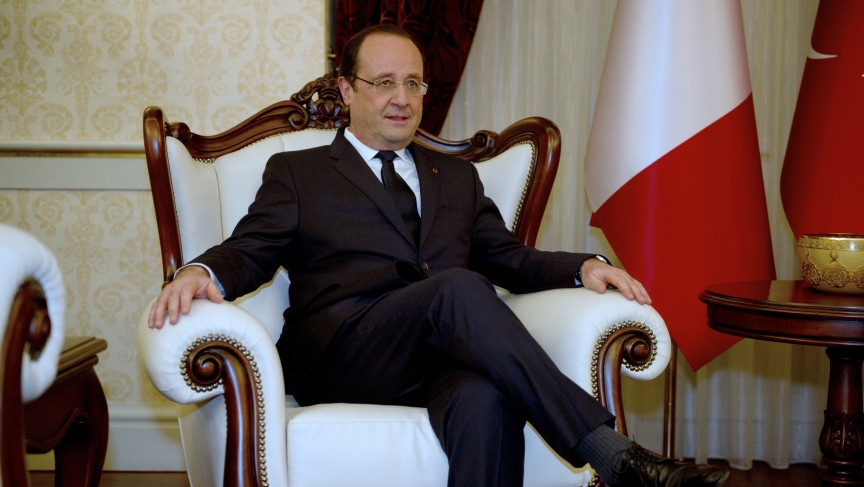 It was a rare interview, granted at a rare moment.

French President François Hollande sat down with Time Magazine's Vivienne Walt shortly before he officially announced his separation from his partner Valérie Trierweiler.

“Room after room of this grand, Napoleonic elegance and opulence, (and) completely empty," Walt says. "There you have the president of one of the biggest economies of the world, all alone in this 300-year-old palace. He has the most powers perhaps of any leader of any western democracy and he is very much alone."

Hollande recently became under intense scrutiny after a French tabloid magazine alleged that the president was having an affair with French Actress Julie Gayet. It published images of Hollande in motorcycle helmet and leaving the palace to pay a visit to the actress at her apartment.

“The motorcycle helmet has become this icon in the French cartoons over the past few weeks," Walt says, "It’s going to live on with him."

Walt put in the interview request in December, well before the recent public scandal.

Through talking to Hollande's friends and acquaintances, Walt says it became clear that Hollande is a "complicated personality in terms of family life and the whole notion of marriage."

It seems to be what he has been trying to achieve over the past few weeks as well.

"He has been able to tune out the media frenzy around his love life," Walt says, adding that now is the time when he should focus on the French economy which has been lagging.

“The economy is in a very bad shape. It is threatening the eurozone recovery and threatening his own party’s prospects... If things don’t change it will be bad,” she says.

Hollande will also be under the spot light when he travels to the US in February. This is going to be the first official visit of a French President in 18 years.

One topic that will very likely be on the agenda is the recent revelations about the NSA.

Walt says when she put this point to Hollande, he said that he wants to “reset” the relationship between US and France on intelligence gathering.

Discussion about Hollande's affair and his love life do not seem to be going away any time soon in France and Walt says the president and his team are hoping the issue will fade away by the time he visits the US.

But she says, "they don’t maybe know what’s in store for them in the US media."