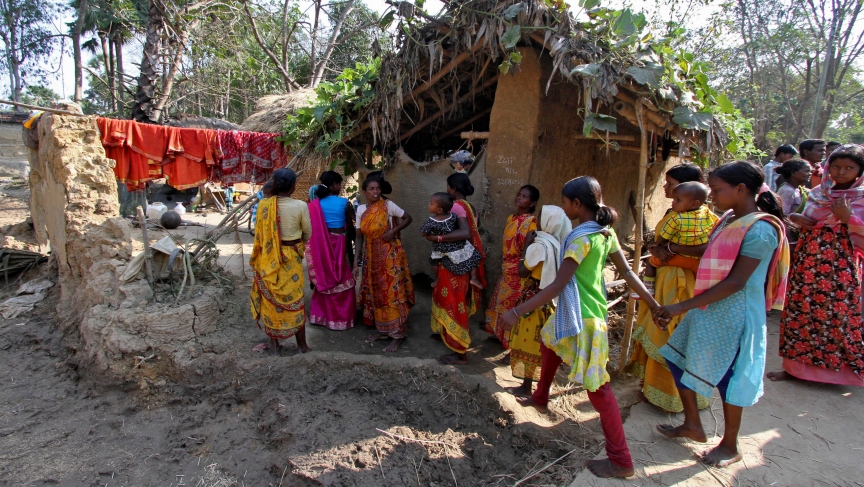 Villagers walk near the area where a woman was gang-raped at Birbhum district, in the eastern Indian state of West Bengal January 24, 2014.

Women's rights in India are back in the news after a tribal court ordered a gang rape to punish a woman found in a compromising position with a married man from a neighboring village.

India's Supreme Court has ordered an investigation and police have moved to arrest the men responsible for the rape. Yet in the village in Bengal where the incident occurred, the Times of India reports that nearly all the locals — men and women, young and old — stand behind the gang rape sentence. The situation lays bare the diversity of perspectives, religions and cultures that divide India as it continues its development.

Workers constructing a new platform in the London Underground accidently flooded a signal control room for the subway with quick-drying concrete, up to a foot deep.

Thinking fast, they bought sacks of sugar to add to the concrete to stop it from setting and doing permanent and expensive damage. Sections of the Victoria line were out of commission for hours, leaving passengers stranded. The Independent has photos and reports the line reopened the next morning, with thanks to the sugar. And the Daily Telegraph’s correspondent explains how sugar helped keep the concrete from hardening.

A newly-formed volcanic island appeared off Japan late last year. Japanese scientists thought the island would disappear back beneath the waves, but fresh lava has grown it to 30 times its original size.

It even merged with a nearby island. And the Japan Times reports that, if the island endures, it could slightly expand Japan's exclusive economic zone.

A guerilla artists adds immigrant workers to the LA landscape

In homes throughout Los Angeles, immigrant workers care for children and homes and often feel invisible. Ramiro Gomez is changing that, by painting them into the landscape.

After art school, he took a job as a nanny living with a family in West Hollywood. In his spare time, he experimented with painting faceless domestic workers into pictures of glamorous homes he found in magazines. When he uploaded his artwork to Facebook, he became a sensation. Now he paints life-size workers on cardboard and puts the cut-outs in the neighborhoods where they work. PRI’s The World has photos and reports that his art is selling well, often to the people who have immigrant workers in their homes.

The blues takes on new meaning in a South African prison

South Africa’s prisons are known for harsh conditions and occasional problems with violence. Now, one prison is known for its jazz.

Groot Drakenstein Prison in the Western Cape province is famous for its association with Nelson Mandela, who took his first steps to freedom through its gates. Staff at the prison are reaching out to young prisoners by giving them the chance to sing and perform in their own jazz band. The BBC’s Nomsa Maseko has a video showcasing the prisoners and their music.

Headed to the World Cup? Be warned

Brazil will host the World Cup, starting in June. Yet half of the dozen stadiums planned for the competition still aren't ready. Neither are the planned upgrades to the domestic airline flights and terminals needed to ferry fans.

PRI's The World's William Troop will be heading to Brazil to cover the World Cup. He sorts out the problems and gets advice from a BBC sports reporter.

Brisbane got almost six inches of rain Thursday, leading to flash floods throughout the city. And more rain is one the way over the next five days. After baking under oppressive heat earlier this month, the Australian city has descended into a wet cycle, with highs in the mid-80s, according to the Brisbane Times.