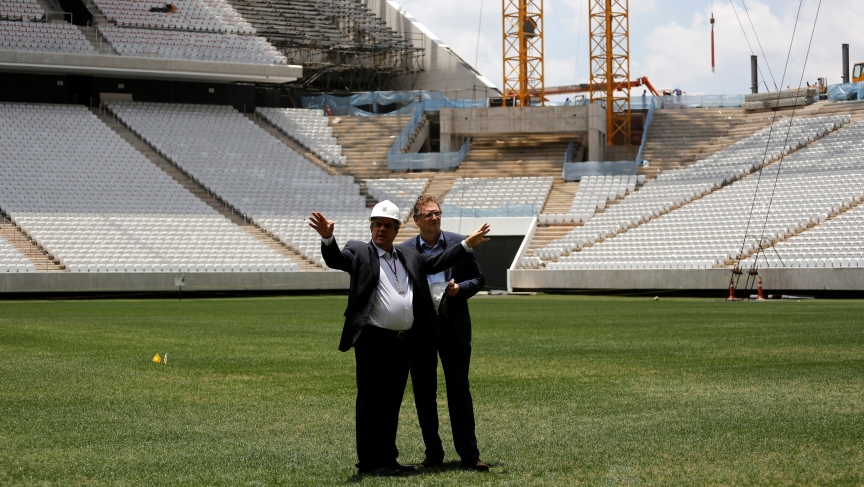 It's part of the ritual of big sporting events. In the run-up, there's always a bit of worry about whether all the venues will be ready in time.

But in Brazil, which is hosting this year's World Cup soccer tournament, that worry is more like an anxiety attack right now. And because I'm planning to travel to Brazil for the World Cup this summer, I'm feeling some of that anxiety too.

First the facts. Brazil is seriously behind in its preparations for the World Cup, which kicks off in June. Organizing body FIFA wanted all of the tournament's 12 stadiums ready last month. But half of the venues missed the deadline. And FIFA warns one of the venues, in Curitiba, is so far behind matches there may have to be scrapped from the schedule.

OK, I can deal with that. I have tickets to games in Salvador and Recife, two cities where the stadiums have been ready for some time. But I can imagine the outrage I would feel if I'd been planning to attend games in Curitiba — or any of the other cities where the stadiums may not be ready in time. Thousands of fans are investing a lot of money in nonrefundable plane tickets and hotel reservations to attend those matches, and they must be freaking out hearing organizers now talking of perhaps having to move those games elsewhere. That could be a big mess for thousands of people.

Personally, I feel lucky in that regard. I have tickets to events that will take place where I think they'll take place. And, ultimately, I think most stadiums will be ready in time. But I have other worries, based on what I'm reading about Brazil's less-than-perfect preparations.

Air travel for example. Brazilian airports and airlines are reportedly not ready to handle the added demand of thousands of fans flying into and around Brazil for the tournament. And there are countless World Cup-related infrastructure projects that seem hopelessly delayed. For example, I've read that the road to the Recife stadium isn't ready yet. Plus, I'm a bit worried about there being enough security, and about more protests around the games, like the ones we saw in Brazil last year during the Confederations Cup.

Well, it turns out my fears are well-founded. Today, we spoke to Tim Vickery in Rio de Janeiro. He covers Brazil and Brazilian soccer for the BBC and other news outlets. And what he had to say about the country's World Cup headaches was not exactly reassuring.

"It's getting hairy," said Vickery about the missed stadium deadlines. He said FIFA has given Brazilian organizers until Feb. 18 to make the necessary guarantees that stadiums will be ready. After that, he said, participating teams will have to know for sure where they will be playing because they have to plan for very complicated logistics in a country "the size of a continent."

And what about security? Brazilian authorities say they have that covered, with plenty of security forces on hand for the games. But Vickery pointed out that last year, when massive protests took place at the same time as the games of the Confederations Cup tournament, so many police officers were needed to contain the protests, that there was less security farther away from the stadiums.

During that tournament, "I was mugged in Salvador at gunpoint at 1 o'clock in the afternoon," Vickery said. "This is a situation that I fear will repeat itself during the World Cup."

As for that access road I mentioned in Recife, Vickery said the stadium is in a remote, swampy location outside Recife. The good news, he said, is that the stadium can be reached via subway or bus service. The bad news? Both were clearly not ready for the crowds during the Confederations Cup.

But Vickery went to great lengths not to discourage me, or anyone else, from going to Brazil this coming June and July.

"These are problems that urban Brazil faces, but I really wouldn't want to put anyone off," he said. "I had a fine time during the Confederations Cup. I really enjoyed the atmosphere and I think the atmosphere will be much better during the World Cup, because it will be so much more cosmopolitan."

"There will be problems, there will be stories to tell your grandchildren," Vickery cautioned before offering up some key advice. "Try to mentally prepare yourself."

He was talking about preparing to deal with crime. But I think it sounds like perfect advice for the whole World Cup experience in Brazil.