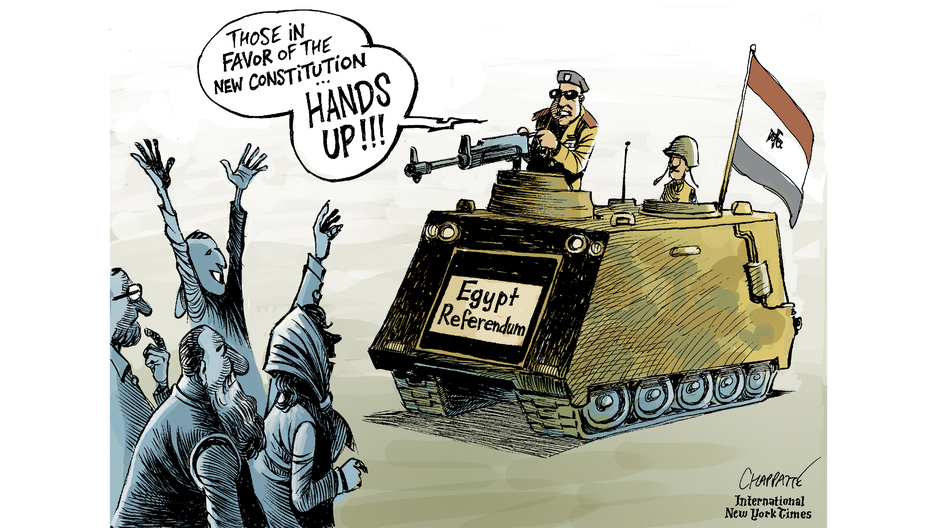 Swiss cartoonist Patrick Chappatte's explores the aggressive steps taken by Egypt's interim government, led by Gen. Abdel-Fattah el-Sissi, to get citizens to vote yes on the new constitution. In the lead-up to the referendum, people were arrested for putting up posters and campaigning for a no vote. The Muslim Brotherhood and other Islamist groups boycotted the referendum, calling it "illegitimate."

The early indication is intimidations and boycotts do, in fact, impact elections. Big surprise.

A staggering 98 percent of voters in this week's election endorsed Egypt's new constitution. It's a result that is reminiscent of the elections held under former President Hosni Mubarak and a far cry from the deeply split elections that ushered the Muslim Brotherhood into power in 2012. Of course, there's good reason.

"Prior to this week’s two-day referendum, police arrested at least seven people for putting up posters urging a "no" vote on the constitution," The Los Angeles Times reported. And the Muslim Brotherhood refused to participate in the vote.

Vatican officials get a rough ride before a UN panel

Officials from the Vatican were called before a United Nations panel on Thursday, asked to explain the Catholic Church's failure to stop priests from committing sexual abuse in countries around the world. Testifying in Switzerland before the UN's Committee on the Rights of the Child, church leaders were also pressed about why they refused a request for data on abuse. Church leaders said they only release such information if requested to do so by another country as part of legal proceedings. This is the first time Vatican officials have been confronted publicly about the church's sex abuse scandal, the BBC reports.

Chefs Harris Salat and Tadashi Ono run Japanese restaurants in New York City, one of the global food meccas. They've jointly written a cookbook full of Japanese food. But it's not exactly conventional Japanese — they call it Japanese soul food, things like gyoza, soba, tempura and curry. In Japan, curry was viewed as a European food, rather than from South Asia, brought by the British Navy. PRI's The World has a story about what curry means to Japanese culture, and how it got there.

This brings new meaning to the term frozen fish

A photograph taken by Ingolf Kristiansen from Norway has caught the attention of the world's media. He was out walking his dog in the north of the country when he realized a school of fish had been frozen solid beneath the ice. He took a picture and sent it to Norway's national broadcaster — which posted it on the front page of its website — prompting hundreds of calls from curious journalists. The Local has the photo and more on how the fish froze as they tried to escape, en masse, from a rapidly freezing bay.

We first introduced you to Nepal's Living Goddess tradition this past summer. Now, Nepal's government is making a change to the arrangment it has with these young girls who lose their status when they reach puberty. MENAFN.com reports on a change in government policy to help these goddesses as they transition to normal life. Nepalese officials say they will allow the country's living goddesses to keep their pensions for an additional 10 years, as they adjust to normal life. Known as 'Kumaris' the girls are selected at birth to live in a palace-temple in the centet of the capital city Kathmandu. The ruling follows a decision in 2008 to allow the girls to study and take exams.

How do you teach an old spy new tricks?

The inventiveness of officials at the National Security Agency is impressive. They've found a way to hack into computers that aren't even connected to the Internet — using radio waves. Spying devices were implanted inside 100,000 computers around the world, allowing the agency to find out what users were doing while keeping its spies a good distance away. The project requires someone to implact the device, though, which has put American manufacturers in a tricky position. New York Times reporter David Sanger, who helped break the story, spoke to PRI's The World about the new invention.

On Wednesday, we revealed a problem for athletes competing in the Australian Open tennis match: their water bottles were melting. On Thursday, the problem got much more serious. With temperatures at an incredible 109 degrees in Melbourne, all competition was suspended on outdoor courts. A few matches continued when retractable roofs were closed so the courts could be cooled, ESPN reported.