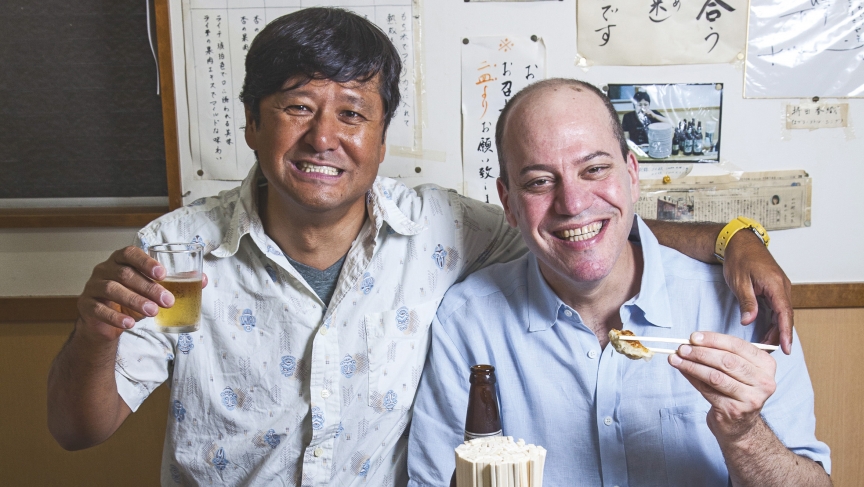 Chefs Harris Salat and Tadashi Ono both own Japanese restaurants in New York.

It's not about fancy stuff like sushi, but rather, Japanese comfort food - things like gyoza, soba, tempura - and curry.

"In Japan, curry was originally considered a European food, not a South Asian food," says Salat. “It was actually an import from Britain, via the British navy. What came to Japan was curry powder, and it’s a totally different animal from a curry or vindaloo you would get in the north of India.”

It’s thicker and heavier, so it’s easier to mix with rice and eat it” says fellow chef Ono.

When he was a kid and heard there was curry for dinner, he was always very excited. Ono is not sure why.

“Maybe the spices give you a high similar to sugar,” he says.

It’s also geographical. “Wherever you go, there’s a regional curry,” explains Ono. “Hiroshima has an oyster curry, in Hokkaido they use milk, butter, and a lot of potatoes. Ten thousand different places have 10,000 different curries,” says Ono.

One of which is the “battleship curry” served up in Japan’s naval forces. Ono and Salat found dozens of different curries on the website of the Japanese Navy.

“Every ship has its own recipe,” says Salat. And Friday is curry day in the navy. “The ingredients we saw were crazy, coffee, chocolate, cheese, blueberry jam.”

by Harris Salat and Tadashi Ono

This is the curry served every Friday aboard the Japanese naval patrol ship Hachijo, which we adapted for four, instead of 400! We love the curry creativity of Japanese navy cooks. Check out the ingredients in this version: cheese, honey, ketchup, a hit of strong coffee—the last one, we guess, to keep sailors extra alert when the Klaxon blares!

When we cooked it up, we were surprised how tasty and complex it came out. The cheese melts into the curry, adding another layer of flavor, and thickening it, too. Add more pork if you like your curry meatier; Japanese cooks usually go lighter on the protein.

And don’t forget, navy curry isn’t navy curry without salad on the side and a glass of milk.