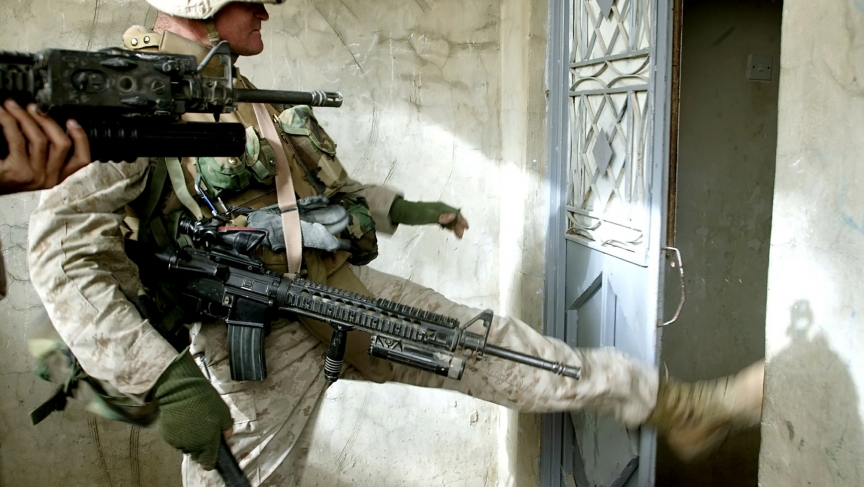 U.S. Marine Lance Corporal Michael Oliver Ray, performs a search operation in Fallujah, Iraq, in December 2004. An American offensive at the time came to be known as "The Second Battle of Fallujah."

American veterans of the Iraq War are frustrated to hear the latest news from Iraq's Anbar Province. And that's because of the high price US military forces paid in Anbar during the war.

Iraqi government forces are now fighting Islamic extremists linked to al-Qaeda in Fallujah and Ramadi. Thousands of families have fled the cities and the United Nations is warning of a looming humanitarian crisis.

Over the weekend, al-Qaeda-linked militias raised the black flag of radical Islam over captured buildings in those cities. We asked The World's network of veterans what they were thinking about the new developments.

"When I first heard about it, my gut knotted up," writes Ryan McNabb, who served as a medic with the US Marines outside of Fallujah in early 2004. He said 15 of his comrades died during his seven-month tour. "I [thought of] all the service members that fought there and had fellow sisters and brothers die there, [and] it just kinda shook me.

"I knew it was going to happen when we exited Iraq. I just had some hope that the Iraqis would fight to keep their city," he added.

Some of the responses we received were downright bitter.

One vet said the current situation in Fallujah is further proof that all the time, money and lives lost by the US in Fallujah "was not worth it."

"It makes my blood boil," another Marine said.

In a phone conversation, McNabb explained that he understands why some of his fellow veterans feel that way.

"I feel frustration that, yes, people may have died in vain," he said. "But the thing that almost upsets me more is, we are not standing by our word."

US officials made a lot of promises to the people of Iraq, McNabb said, and he doesn't feel those promises were kept. Nonetheless, McNabb said he's still proud of his service in Iraq.

Another vet wrote to say he and his fellow Marines fought in Fallujah for each other, not for an outcome ten years down the road. "Unfortunately, the civil war in Syria has become a nightmare for the people of Fallujah, who will not get a break from this consuming violence," he added.

Michael Garner did two tours in Iraq with the Idaho National Guard. From Boise, he said he was thinking of the Iraqi soldiers and police he worked to train a decade ago. Garner said he worked with men from Fallujah who seemed to have "stoic resolve" about returning to a city that had already become a hotbed for extremist violence.

"I don't think any of them were under any illusion," Garner said. "I think they had the resolve of, 'here we go again.' And history has proven them correct."

This story was supported by helpful insight from our veterans community. If you're a vet, or a family member or friend of one, who served in Iraq and/or Afghanistan and you want to join the community, text "return" to 69866.