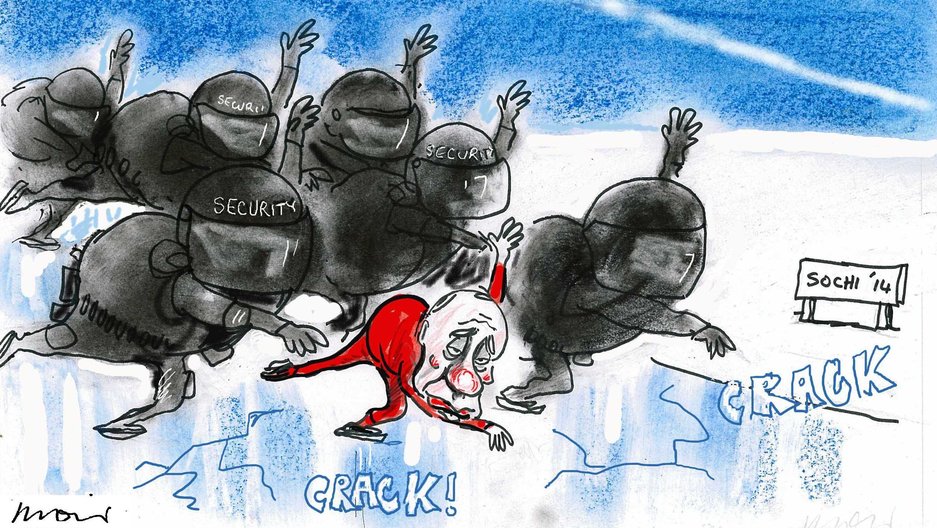 Australia's Alan Moir weighs in on the concern over security at the upcoming Sochi Olympics after two suicide bombs went off in Volgograd earlier this week, killing 34 people. Volgograd is 600 miles from Sochi, but it's the main transportation terminal serving the region.

Julian Assange and Wikileaks were kings of the critics of American international spying and surveillance. That is, until Edward Snowden came onto the scene earlier this year.

Foreign Policy looks at how Snowden's revelations about National Security Agency surveillance totally pushed Assange out of the spotlight. While WikiLeaks helped Snowden escape to Russia, it's been effectively marginalized since.

As one data point, FP points out that searches on both Assange and WikiLeaks have plummeted, while searches on Snowden remain higher — though not as high as they were when he burst onto the scene.

Colleen LaRose, the Pennsylvania woman known as Jihad Jane and convicted of plotting to kill Lars Vilks, the Swedish artist who offended many Muslims when he drew the Prophet Mohammed on the head of a dog, likely faces a long prison sentence, according to Reuters. Despite providing what was described as substantial support to investigators, prosecutors from the US Attorney's office asked a federal judge to sentence her to decades behind bars, saying she poses a continuing risk to society. LaRose is set to be sentenced on Monday.

Surf, sun and a side of semiautomatics

Japanese tourists are adding a little indoor activity to their trips to Hawaii. Because of the nation's restrictive gun laws, many Japanese don't own a gun at home. That means vacations become the perfect time to engage in a little recreational shooting, The New York Times reports. It's so popular, and Hawaii is such a popular place for Japanese tourists, that there are four private gun clubs within a half-mile radius in Honolulu.

Japan has had a hard time finding people to take on the low-pay, high-risk job of decontaminating Fukushima after the 2011 nuclear meltdown. An off-shore earthquake and tsunami devastated the nuclear plant at Fukushima in the worst nuclear disaster since Chernobyl. Clean-up is continuing — but very slowly. In order to move it along, the country is hiring homeless people to do the decontamination work no one wants. But advocates for the homeless say these men and women are being taken advantage of, asked to do jobs no one else is willing to do. PRI's The World has the story.

Over at BillMoyers.com, author Zack Beauchamp argues that 2013 was the best year in human history for five key reasons: Fewer people are dying young, fewer people suffer extreme poverty, war is becoming more rare, violent crime rates are plummeting and discrimination is declining. While there are certainly countless examples of children dying, wars and discrimination, Beauchamp argues it's at rates so low we've never seen before. And he attributes the improvement to a number of different factors — including the disappearance of leaded gasoline. What do you think? Leave a comment below and tell us if you think 2013 was great.

A coral to save them all

Scientists in Palau are spending a great deal of time under water, studying the island's coral reefs. Incredibly diverse, with vibrant colors and patterns, the coral of Palau shouldn't even exist because of the water's high acidity. But that situation is exactly why scientists are so interested. As pollution rises and the ocean becomes more acidic, coral reefs around the world are threatened. And in order for coral reefs to survive, protecting the organisms that live there, we may need a lot more of the coral that thrives near Palau, PRI's The World reports.

The French island of Réunion is in line for a lashing by Tropical Cyclone Bejisa. The Indian Ocean storm is packing winds of 120 mph — what would be a strong category 3 hurricane in the Atlantic Ocean — and expected to hit the island of 900,000 people over the next 24 to 48 hours, according to AccuWeather.