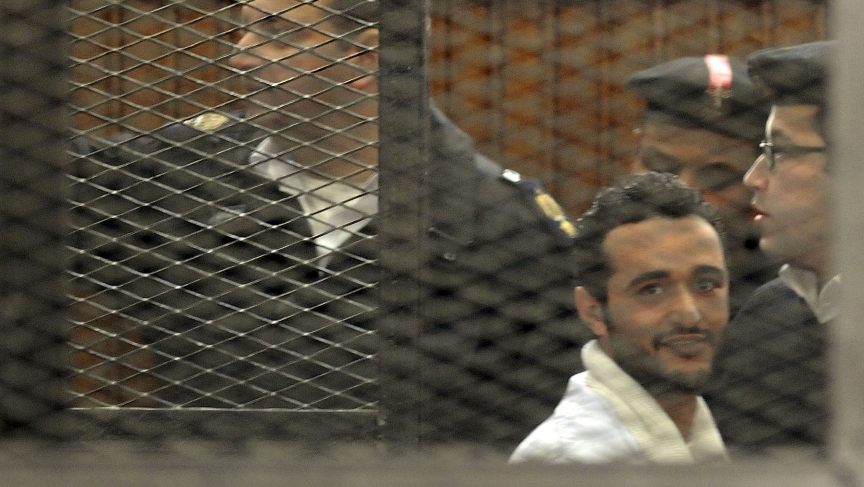 Political activist Ahmed Douma of the 6 April movement looks on behind bars in Cairo, December 22, 2013.

On Sunday, a court in Egypt sentenced three political activists to three years in prison.

Ahmed Maher, Mohamed Adel and Ahmed Douma were co-founders of a group called the April 6 Movement.

The Movement began as a Facebook page in support of striking textile workers in the town of Mahallah.

"It was launched in 2008 and from this movement, they created this type of peaceful, non-ideological, political activism that ultimately led to the 2011 Revolution," says Financial Times' Borzou Daragahi who has covered Egypt and the Middle East for a long time.

These men were accused of organizing and participating in demonstrations that were not authorized. The law under which they were sentenced was put into place after the ouster of the democratically elected Mohammed Morsi in July.

Daragahi says many see the law and the sentencing of these activists as a step back to the repressive rule of Hosni Mubarak and also an attempt by the military to consolidate its control.

"Many people also consider this as ironic, as the interim government came to power because of a series of unauthorized, illegal protests," he adds.

Daragahi sees 2013 as a very eventful year for Egypt.

"I think what historians and political scientists are will look at is the way the Egyptian elite, faced with the prospect of an imperfect, flawed democratic process, dominated by political Islamists, instead went back into the arms of the deep state and embraced them," he says.

Daragahi gives the example of the secularists, the Social Democratic Party, whom are more the educated, wealthy elites in the country with strong ties to the West who did well under Mubarak. He says this group aspires to democratic values, but that when it comes down to it, they ultimately didn't support it.

Looking ahead, Daragahi refers to an editorial in the New York Times published Monday, which said that things couldn't look any bleaker for Egypt.

"Politically speaking, it's becoming somewhat of a back water again," he says, "Whereas, once [Egypt] was an inspirational role model for democratic aspiring people around the region, now it seems to be people turning inward."