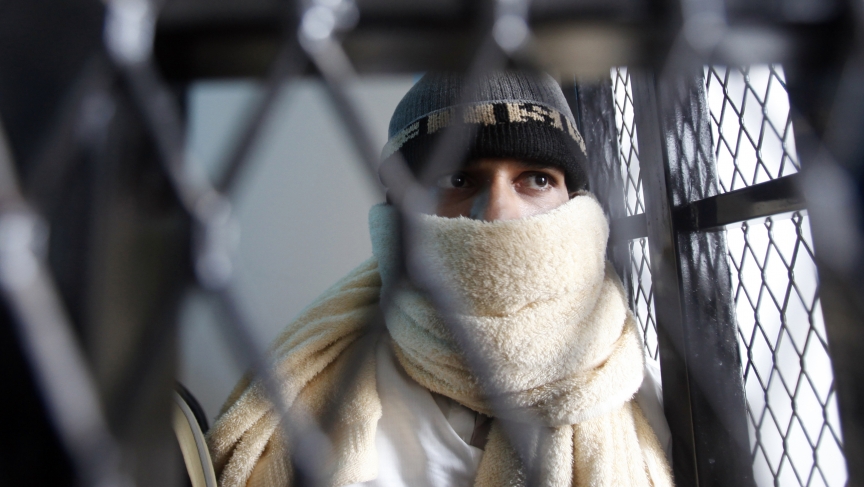 A suspected al-Qaeda militant waiting at the state security court of appeals in Sanaa in March, 2013. Many young men in Yemen get swept up in security crackdowns and become radicalized in jail.

It's tempting in wartime to dehumanize your enemy, especially when that enemy is a militant who may have killed innocent women and children. But al-Qaeda militants have families, too.

The BBC's Shaimaa Khalil just returned from Yemen, where she had access to a family that has produced three al-Qaeda militants, all brothers. Khalil met with their mother, Umm Fawaz, and their sister, Amina, at the family home in a poor suburb of Sana'a, the country's capital.

Yemen is home to a strong branch of al-Qaeda: Al-Qaeda in the Arabian Peninsula. Yemen is a country in chaos, with a host of tribal and separatist rebellions in progress, besides al-Qaeda's insurgency.

Fawaz, the eldest boy, is now dead. He had been captured by Yemeni authorities, but had escaped and taken up arms again. Then he was killed in a skirmish with security forces.

The second son, Abu Bakr, is currently detained in a "political security" prison in Yemen. He has not been tried for anything, and is unlikely to face trial anytime soon.

Salman, the youngest of the trio, is languishing at the US prison in Guantanamo after being captured as an enemy combatant in Afghanistan.

Once inside the family home, journalist Khalil says Umm Fawaz and her daughter Amina uncovered their faces. "The first thing I saw were her tears," she says. Yemeni women are usually completely covered, in conformance with the local interpretation of Islam. "Because I'm a woman, they're able to show me their faces."

"They don't have much stuff," Khalil says. "So we sat down on the floor of the living room and had a cup of tea. As soon as I mentioned the names of her three sons, the mother just broke down in tears."

The women were defensive when Khalil pushed on the issue of their boys hurting other people. She said they didn't get into details of how the boys got mixed up in the jihad business. But speaking generically, the sister, Amina, says so many young men and boys in Yemen are angry at the government because they are poor and unemployed. Many of them get swept up in government round-ups. And she argues that it's usually in prison that these kids get radicalized and affiliated with particular organizations.

Khalil says that does indeed seem to be the case. "They come out seeking revenge" for their suffering, she says. "They hold so much hate."

Khalil says she noticed that the two women live fairly isolated lives. They live in a poor neighborhood where normally you'd expect to find a close-knit community. Amina told Khalil that "we don't mix with anyone, and to be honest, my life, my social life, including my marriage, were ruined" by her brothers' actions.

Khalil notes that al-Qaeda is not popular in Yemen, since its actions have killed and injured plenty of Yemenis.