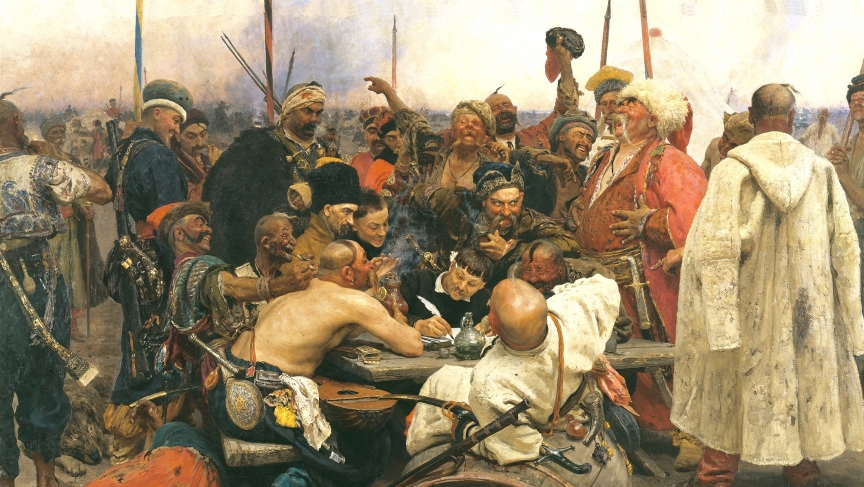 Ukraine can't seem to make up its mind. Which is tough, because it has some big decisions to make.

The country is broke, and is looking at rival bail-outs from Russia and the European Union. Last month, President Yanukovich refused to sign a deal with Brussels. And that decision brought thousands of Ukrainians onto the streets of the capital, Kiev. Where they remain.

On Thursday, Yanukovich blinked and said he would sign the deal with the West. But he won't give a date. He's said to be under a lot of pressure from Putin's Russia to turn to the East.

This conflict between East and West seems to be the defining characteristic of Ukrainian history.

And that in turn is largely a product of its geography.  Ukraine is mostly a big, flat plain, with no natural defensible borders, except the sea to the south. Invaders can easily sweep in. And there have been plenty of invaders. Poles, Turks, Mongols, Russians, Austrians - even the Swedes and Lithuanians - have conquered parts of Ukraine at different times.

So Ukrainians have usually had to find powerful friends to help them survive. A classic case was in the 17th century, when the Ukrainians -- championed by a Cossack horde -- drove out their Polish overlords with the help of the Tatars. But when the Tatars deserted them, the Ukrainians had to make a clear choice between cutting a new deal with Poland, or taking a Russian offer of help.  They chose Russia.

That was the beginning of a love-hate relationship with Russia that persists to this day.  Ukraine is hugely important to Russia. Kiev was the home of the first Slavic state in the 9th century. It was a state known as Rus. It's seen as the birth of Russian civilization. Kievan Rus became the largest and strongest power in eastern Europe, and Russia long ago appropriated its memory and legacy as its own.  More practically speaking, Ukraine provides a vital outlet to the sea for Russia, and key pipelines that carry Russia's wealth of oil and gas pass through Ukrainian territory.

But Russia, for the longest time, denied Ukrainians their own political and cultural identity.  Starting under Tsar, Peter the Great, 300 years ago, Russia first crushed Ukrainian autonomy, then tried to destroy its culture. The Ukrainian language was banned from schools and universities in 1804.

After 1863 it was illegal to own or publish anything printed in Ukrainian.  The Tsarist authorities presented Ukrainian as just a dialect of Russian, calling it "Little Russian." In fact, the languages - while closely related - are largely mutually unintelligible, like Spanish and Portuguese.

However, not all of Ukraine was under Russian control, during the time of the Tsars.  Much of what's now western Ukraine had fallen under control of the Austrian empire, and the Austrians allowed Ukrainian intellectual life to flourish, and the city of Lvov became home to a community of romantic Ukrainian nationalist poets and writers.

There was a brief renaissance of Ukrainian culture in the Soviet part of the nation in the 1920s, but in the 1930s Stalin ramped up policies of repression and Russification to terrifying levels. As a result, many Ukrainians were ready to support Hitler when he went to war with the Soviet Union in 1941, but the brutality and racism of the Nazis quickly alienated most Ukrainians, who chose to support Moscow.

Independence finally came in 1991. But it came with the borders the Soviets had bequeathed them. This meant that some Ukrainian speaking areas remain in Russia and Belarus, while Russian-speaking areas are inside Ukraine, like Crimea.

Moreover, the Soviets had moved millions of ethnic Russian workers into Ukraine's cities and mining districts. In Soviet times, every citizen had to learn Russian as well. That means today, most Ukrainians are fluent in Russian, and many use both languages.  Some people who identify ethnically as Ukrainian say they only speak Russian at home.

All this means many Ukrainians are ambivalent about their national identity and destiny. Many remember Russia as an oppressor. Others see Russia as their motherland. But now, facing bankruptcy, Ukraine must once again choose east or west.