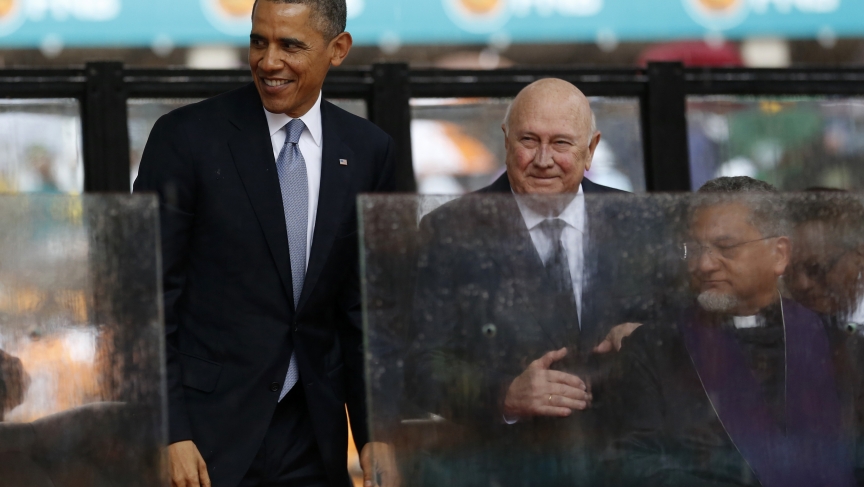 At Tuesday's memorial service honoring Nelson Mandela in South Africa, he was called a "giant of history." Mandela was refered to as a "hero" and "one of the greatest leaders of our time."

But many of the countries represented at the service did not support Mandela during the decades he was imprisoned. Instead, they supported the apartheid regime that had imprisoned him.

Chris McGreal, of London's Guardian newspaper, says the change in attitude came when Mandela was released from prison in 1990. "Internationally, he was immediately embraced," McGreal says. "But right up until that point, he had been a deeply divisive figure in the West."

In Britain, Margaret Thatcher had taken a pretty firm stand against sanctions on the apartheid regime. She stood up to a lot of pressure, particularly from African countries inside the British Commonwealth, to adopt the increasingly international sanctions against South Africa.

During Ronald Reagan's presidency in the 1980s, McGreal points out that the US sided firmly with South Africa. In the 1970s, Reagan had made it clear that he regarded South Africa as democratic, even though only white people could vote.

"The essential view in the West was that South Africa was a bastion of anti-communism and whatever the shortcomings of the government and system in South Africa, it had to be backed up as a counter to growing communist influence in Africa," McGreal says.

He notes that the US and the UK were certainly the "most influential countries in terms of protecting the apartheid regime," but they were not alone.

Following the 1973 Yom Kippur War, African nations broke relations with Israel, he says. The Israeli government looked around and found an ally in South Africa. "Both of these countries considered themselves pariah states, and they developed military weapons together," McGreal says. "They worked together on atomic issues, including South Africa's development of a nuclear weapon."

McGreal says that revisionist history was on display Tuesday at the memorial service. "What you see is a disappearance of the past, an obscuring of the past. You would get the impression from the statements made about Mandela, that Western countries had all along been at the forefront of pressing the apartheid regime to reform and to release [Mandela]."

Not true, he says.