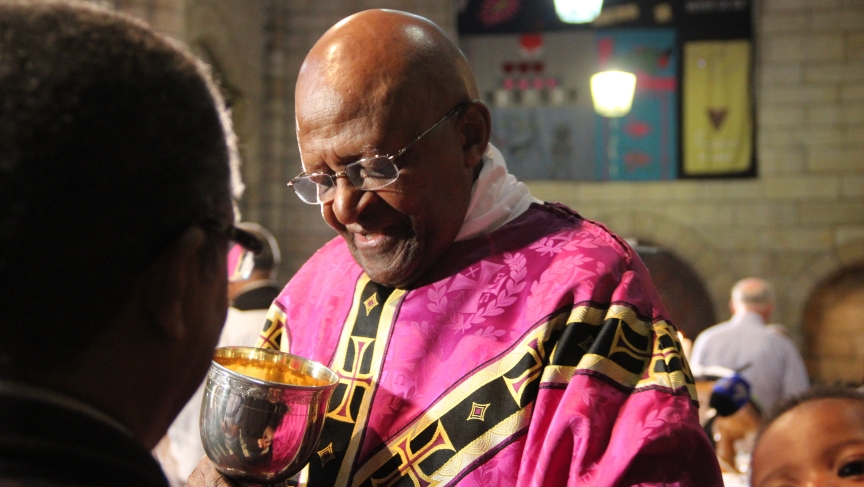 Archbishop Emeritus Desmond Tutu's Friday mass at St. George’s Cathedral in downtown Cape Town — a service usually attended by about 50 people — was transformed into a massive event following the death of Nelson Mandela. Hundreds of worshipers poured into the cathedral.

Media spotlights and microphones transformed the altar into a stage. News cameras lined one wall.

And just as he so often did during apartheid, Tutu stepped before the crowd and delivered a message that reflected a nation’s pain, and offered its people moral guidance.

“Today, we are devastated,” he said. “And it is right that we should feel so. [Mandela] made us feel that we are members of one family.”

Tutu spoke so slowly that parishioners often leaned forward in anticipation. His long pauses were punctuated only by the sound of camera clicks.

“But we are able to give thanks for this [man] who was designated for so long, [a] terrorist” Tutu continued. “This terrorist now has a statue opposite the houses of Parliament in London.”

Tutu then paused to reflect on the ways Mandela has challenged — and changed — perceptions of race in South Africa. He said he received the news of Mandela’s imminent death from the former president’s personal assistant, Zelda La Grange, a white woman.

“Given our history, who would have thought a Zelda La Grange,” he said, emphasizing her European-sounding name, “would have been so closely linked with Madiba? She was his closest staff associate.”

Speaking with his eyes closed for most of the speech, and often appearing on the verge of tears, Tutu concluded with a word of thanks.

“God, thank you for the gift of Mandela.”

His retuned to his seat behind the pulpit. Another minister delivered a closing blessing, and the congregation sang the South African national anthem.

No one left the building until Archbishop Tutu had walked back into his chambers.