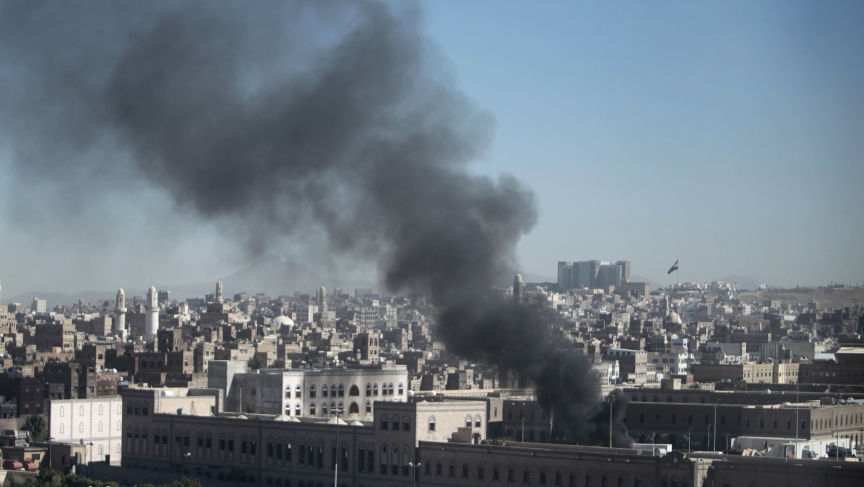 Smoke rises from Yemen's Defense Ministry's compound in Sanaa on December 5, 2013. The Defense Ministry said an attack had targeted a hospital inside the complex and the situation was now under control.

Yemen has long served as a base for militants with ties to al-Qaeda. And they thrive on the country's volatility.

Thursday, there was a reminder of just how unstable the country on the Arabian peninsula is.

A suicide car bomb exploded at the Defense Ministry's military hospital in the heart of Yemen's capital, Sanaa, killing scores of people and injuring many more, including soldiers, civilians and staff.

BBC reporter Shaimaa Khalil heard the explosion from far away. "We saw a huge plume of smoke come out and, from that time on, all through the morning, there was heavy gunfire between the security forces and we're not really sure who else," she says.

Khalil says the attack targeted a very busy, vital and populated area. "This is a huge blow to all the security measures that the government has been trying to put [in place], especially in Sanaa," she says.

The last major attack in Yemen was in May, 2012, when a suicide bomber, wearing an army uniform, detonated a bomb at the rehearsal of a military parade. That attack left many dead and injured and prompted the government to began a military campaign against al-Qaeda elements in the country.

For the past year, Yemeni President Abd Rabbuh Mansur Hadi has been trying to contain al-Qaeda elements, with the help of the US government.

The US has used drones to target al-Qaeda militants in the country — a controversial tactic — and so far, they haven't stopped the deadly attacks.

"Right now, I can hear in the distance some sound of gunfire," Khalil says. "This has really been the sound of Sanaa today."

Security, though, is not the only problem. Khalil says there's rampant poverty, high unemployment, and a lack of educational opportunity in Yemen. With the insecurity, she says, that adds up to a "deadly combination."