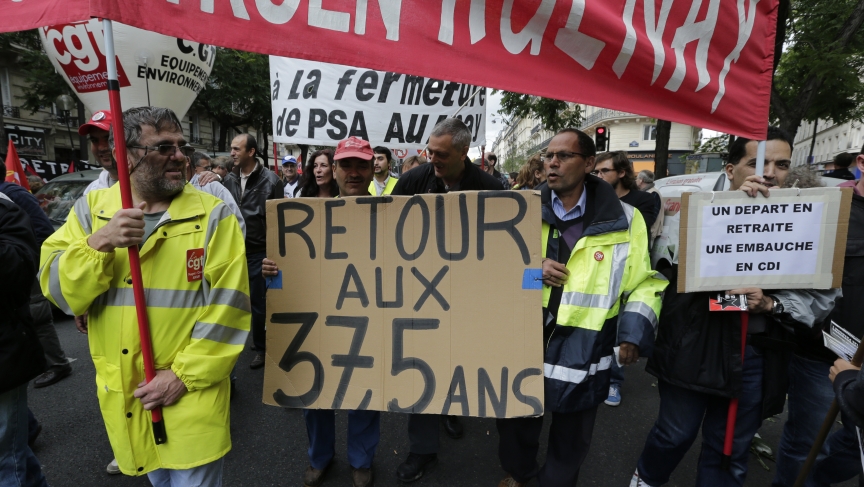 Employees of PSA Peugeot Citroen Aulnay-sous-Bois automotive plant demonstrate over pension reforms in Paris, September 10, 2013. PSA has laid off thousands of workers, in small part because of business lost from Iran sanctions.

The details of the deal with Iran have yet to be ironed out, but some businesses are already seeing big opportunities. In pole position may be French car giant PSA, the maker of Peugeot and Citroen vehicles.

It used to sell hundreds of thousands of cars to Tehran, but had to stop under the terms of the embargo. If business resumes, Iran would benefit. And so would PSA, which has been laying off workers by the hundreds.

In a huge parking lot next to a fenced off PSA plant in Aulnay sous Bois, a few workers wait for the shuttle buses that take them home. It’s cold and cloudy, and the mood among the men and women is glum, even when you mention the word "Iran."

When approached, some workers hurry off, while one simply says, “We don’t know enough yet to comment.”

But at least one worker, the last out after his shift, expects to be out of his job soon.

“I have kids at home. I’ve worked here for 12 years. I’m very worried," he said. "As for Iran, well, they haven’t even mentioned it to us yet. But anything, anything, will help.”

PSA executives declined to comment on the possible reopening of Iran’s market, but a lot is at stake.

For years, PSA got around the Iranian embargo, selling Tehran what it called car “kits.” That is, the car in pieces, and the Iranians would assemble them. Last year, with Iran under growing pressure to halt its nuclear program, PSA pulled the plug.

Iran ratcheted up its own car production, coming up with catchy ads to entice citizens to buy Iranian-made models.

Iran’s former president, Mahmoud Ahmadinejad, tried to turn Iran’s Kiba and Samand cars into a symbol of resistance. At a car unveiling last year, he told onlookers that the new family vehicle can compete with any imported car, and it’s affordable. “I even drove it”, he said. “It’s a smooth ride, and comfortable.”

To "drive" his point home, Ahmadinejad used to go around visiting Iran’s poorest regions - by car. But given the hardship caused by the embargo, his four-wheeled national pride tour sometimes backfired.

In a widely circulated video from last year, the president’s vehicle stops in a crowd of people screaming angrily, "We’re hungry." A woman, veiled and dressed in black, actually jumps up on the car’s hood and appears to give her startled leader a talking to.

Iran’s current government could oversee some $7 billion in new commerce, should the embargo be softened. That would certainly relieve some of the country’s worst desperation.

Because of PSA’s history in Iran, it stands to regain a good chunk of that change. In 2011, the company earned about $14 million a month in Iran, selling some 460,000 car kits, making Iran its largest market outside France.

The loss of the Iranian market last year, coupled with plummeting car sales in Europe, has led to massive layoffs at PSA — and protests.

At one point, the French government suggested it might intervene, bailing out the car giant to save jobs, but that didn’t happen. The doors of the PSA complex in Aulnay sous Bois will shut in January.

It could, of course, reopen in the future, say, with renewed orders for hundreds of thousands of cars, from a country considered completely off limits just a couple of weeks ago. But no one in France is honking for victory, just yet.