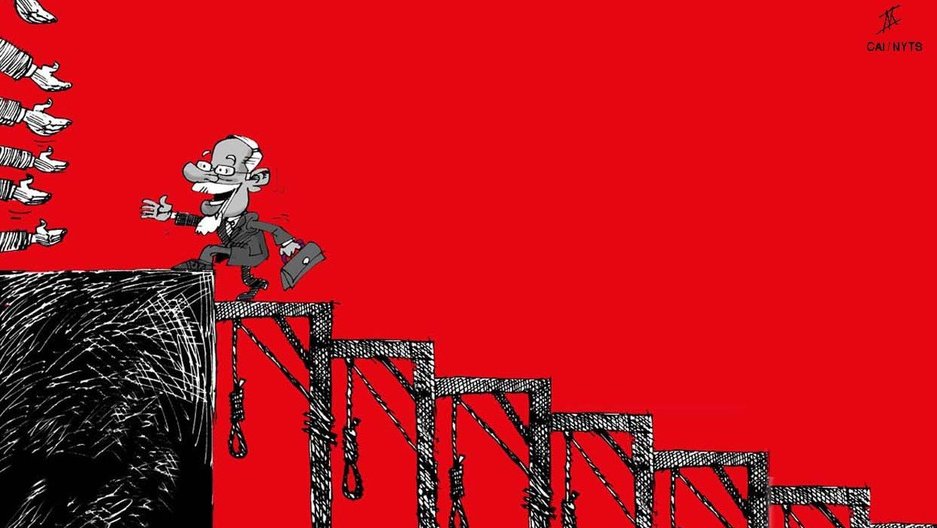 An Iranian cartoonist in exile wants people to remember the continued human rights abuses in Iran as the country's foreign minister, Mohammad Javad Zarif, presents an image of someone who western powers can deal with. As a fresh round of negotiations begins on Wednesday to eliminate the threat from Iran's nuclear program, dissidents join Israel in telling the West to move cautiously.

Syria has seen a rash of kidnappings of journalists. So far, 30 are being held and it seems to be a growing trend.

Among the 30, roughly half are Syrian and half are foreign. They include 4 Americans. What is most disturbing is that often the kidnappers aren't even asking for a ransom, but just holding the reporters as a bargaining chip for the future. The Atlantic looks at why so many reporters are being held.

The UN has declared this to be  World Toilet Day — an occasion to pay tribute to the humble throne, and, for the UN, to call attention to the need for improved sanitation around the world. The Telegraph has a suitably global list of outhouses, karzis and johns from all around — with photos of some of the most exotic. You might want to try the Mount McKinley open air toilet, for its view.

Is a Dutch Christmas tradition racist?

The coming of Christmas in the Netherlands doesn't just mean the arrival of Sinterklaas, or Santa Claus, but also of Zwarte Piet — a blackface character that dates back hundreds of years in Dutch culture. Zwarte Piet is Santa's helper. Some Dutch have questioned, however, whether the character, known as Black Pete in English, has run its course and is now more racist than cultural. PRI's The World has the story.

Lessons from Europe on controlling the world's 'oldest profession'

It’s been more than a decade since Germany opted to legalize most forms of prostitution in an effort to give sex workers better control over their lives. But has the experiment been a success?

The Economist looks at how changes in Germany led to a dramatic spike in prostitution, while a different change in Sweden, criminalizing the clients, may have actually helped reduce the practitioners of the world's oldest profession.

As if real violence isn't enough for this Iraqi youth...

The New Yorker speaks to Yousif Mohammed, an Iraqi teenager who is one of the world’s best online gamers. Much of Yousif’s life is spent online, playing first person shooter games set in the very cities his family fled from, and even the city where they now live: Sulaymaniyah.

But don't think that Mohammed is simply wasting his life playing video games: he aspires to be a doctor.

White truffles are a delicacy throughout the world and coveted by chefs. The smelly fungi grow underground, look like ugly potatoes, and are rooted out by specially-trained dogs. At a recent auction, some sold for thousands of dollars — and the proceeds went to charity. PRI's The World brings us to the Piedmont region of Italy, where the top mushroom sold for $120,000.

A fierce storm moved through Sardinia, Italy, on Monday and into Tuesday, bringing massive rain and spawning a tornado that killed at least 16 people, including a family of four found drowned in their ground floor flat. According to The Guardian, the storm dropped as much rain in 24 hours as the area typically sees in six months.