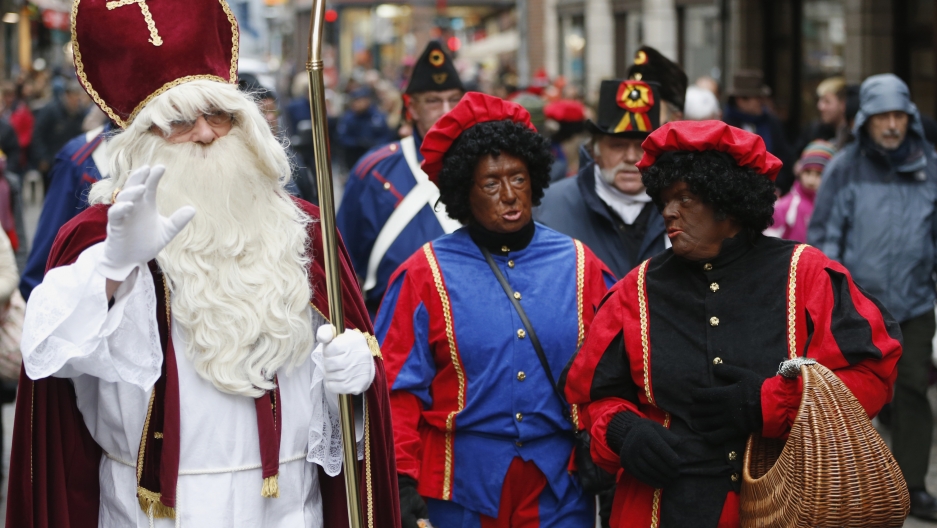 Saint Nicholas is followed by his two assistants — called "Zwarte Piet," or Black Pete — during a traditional holiday parade in the Netherlands.

Black Pete is an old tradition.

When Sinterklaas, as Santa's known in The Netherlands, arrives, he's accompanied not by the elves that would be familiar to American children, but rather by "Black Pete" — a white man dressed in black face and assisting St. Nick.

BBC reporter Anna Holligan says the tradition dates back some 300 years. According to historians, Black Pete was originally a sort of demonic character who would capture bad children and take them back to Spain — where legend says he originates.

"As the years progressed, he turned into a freed slave," Holligan said. "And people here say, 'you know, he's been liberated and Sinter Klauss is his friend.' And now, if you ask people how did this character come to have black skin? They say, 'well, he goes down the chimney, so it's just soot from the chimney."

A minority group approached the the UN Council for Human Rights about the tradition and a representative of the UN wrote to the Dutch government, expressing its concerns, Holligan said.

"The key point was that, sometimes, cultural rights and the people's rights to express their culture, which has been historically OK, can sometimes be in conflict with human rights," she added. "This isn't a homogeneous country anymore. After the second world war, there were lots of people coming from Turkey and Morocco. And people tell me their kids are running home from school and trying to scrub their skin because they've been called 'Zwarte Piet' in class."

She said it's a painful piece of history for many Dutch.

"If this is ever to be abandoned, it will be the Dutch people deciding that they want to move on, and that they recognize that, for some minority groups living in this country, calling this country home, it's no longer acceptable," Holligan added.

The Sinterklaas festival kicked off this past weekend — and once more included a brass band of Black Petes. The festival ends Dec. 5, when Black Petes come down the chimney.

"Legend has it that you leave your shoes by the fireplace and the Black Petes will deliver gifts, traditionally, a chocolate letter (as in the alphabet) in your shoe," Holligan said.

While the debate continues in the Netherlands, some Dutch are showing their support for Black Pete.

Holligan visited a tattoo parlor where one woman named Michelle was having a Black Pete tattooed between her shoulder blades.

"She believed it was her cultural right to express herself," Holligan added.