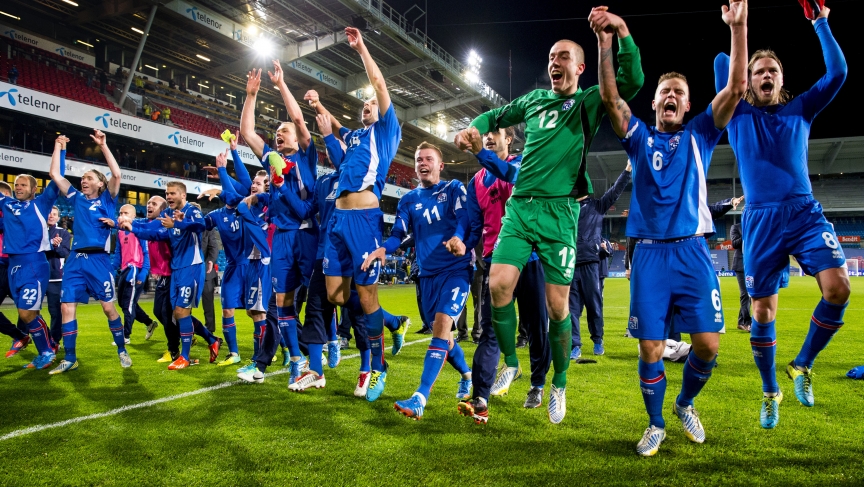 It’s nail-biting time for many soccer fans out there — the World Cup playoffs.

Over the next week, national teams will do battle to try and snag one of the few remaining tickets to next year's World Cup in Brazil.

The smallest nation with a dog still in this fight is Iceland, who plays Croatia on Friday.

Now, Iceland has a very small population, and thus a small pool of professional players to choose from. And yet, they have a chance, however slim, of making it to Brazil.

That's more than IRELAND can boast.

The Irish national team has already been eliminated, and most Irish fans are already looking well beyond Rio.

But not Eoin Conlon.

Over beers with a Brazilian co-worker in Dublin recently, Conlon started wondering out loud about throwing his support behind Iceland.

“And we kind of laughed, saying: ‘Well, that’s as close as Ireland's going to get to Brazil. It's only a letter difference. A “c” for an “r.” We might as well be brothers,’” says Conlon.

Conlon and his friend work for a digital agency, so they did what comes naturally. They built a website in support of Iceland's soccer team.

Then, they started a Twitter feed urging Irish soccer fans to back Iceland.

The campaign is called County Iceland.

Ireland already has 32 counties. So, Conlon says, why not make Iceland the 33rd?

“There are only about 320,000 people in Iceland. So if they were a county in Ireland — I'm calling them the 33rd county — it would [be] only the fifth-largest county in Ireland. It's incredible the success they've had. And I hope it continues,” he says.

Conlon says the website is just a bit of fun. All a visitor has to do is click a "support" button.

The site also introduces Irish fans to the Iceland line-up, although he’s added a few "o"s here and there.

You know, so that, for example, Icelandic forward Gudjohnson is now O'Gudjohnson.

Conlon's also, conveniently, changed some of the traditional Irish soccer chants to make them "Iceland friendly." (See below)

He says some people are questioning his Irish patriotism, but for the most part, everyone's taking it in the spirit it was intended: as a fun way to forget about Ireland's failed qualifying campaign.

Although, Conlon does admit to having something of an ongoing love affair with the Icelandic soccer team.

“My relationship with Iceland starts many years ago. My first international match was Ireland against Iceland. It was a terrible match. Finished 0-0. So I think that's when the story of Eoin and Iceland begins," he says. "There was around a 15-year hiatus. But now, we're back together.

"And very much in love," he jokes.

The County Iceland site has only been live since Sunday, but already more than 10,000 visitors have become "supporters."

Conlon says he can't believe the site's gotten this much attention. Now, he says, why not try to get as many supporters on the site as Iceland has people?

He notes that if Iceland does manage to beat Croatia, it will become the least populous nation to ever qualify for a World Cup.

The previous record holder(s)? Trinidad and Tobago, home to more than a million people.

But hey, given how few of them there are, they'll probably take all the support they can get.