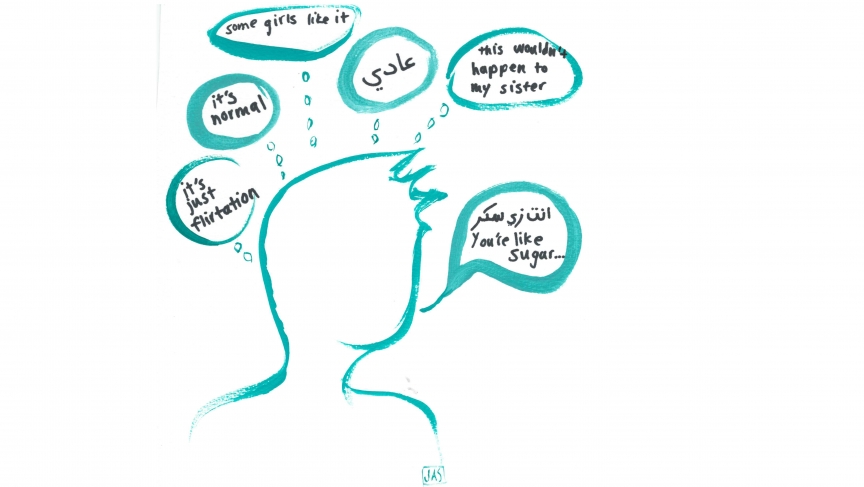 Julia Simon imagines what's going through the mind of a man harassing her on the street in Cairo.

Many things have changed in Egypt since the Arab Spring uprising in 2011. But one thing that's remained a constant is sexual harassment. Egyptian women were harassed — and sometimes attacked — before the revolution, and they're still being harassed and attacked now.

A new survey of gender experts in 22 Arab states, conducted by the Thomson Reuters Foundation, found that Egypt ranks at the bottom when it comes to treatment of women. And that's partly because of the pervasive harassment.

American reporter Julia Simon, who lived in Cairo for two years, says she was harassed every day.

"It's incessant," she says. "That's why it has such a big impact. Walking down the street, you feel stressed out all the time, you can't relax."

She points out that it doesn't just happen to young women or foreign women; it happens to all women.

She says that the women she knows in Egypt have "built up a kind of armor" around themselves: "When we walk on the streets, we are constantly on guard."

One day, Julia Simon decided to try to interview one of the men who was harassing her. She chose to speak with a man whose name was Ahmed, because his comment wasn't especially threatening — he said, "you're like sugar." He agreed to speak with her on tape, and below is the transcript of a portion of their conversation, translated into English.

[If you have questions for Julia about her experiences in Cario, post them in the comments below. Julia will be online taking questions on Tuesday until 9pm ET]

JS: Do you think it's okay to talk to a woman and say she's like sugar?

JS: In your life, have you ever put your hands on a woman? In Tahrir, some guys do that. You understand? Have you ever done that?

JS: Where and when?

A: Outside in a public place.

A: Not really. Just sometimes.

JS: Just sometimes. What do women do? Do they get mad?

A: There are ones that get upset and ones who don't — there are two kinds. It's not every girl.

JS: Which girls. Girls with hijab?

A: Not all of them, but yes, some of them wear the hijab.

JS: How old are you?

A: No. Verbal harassment is not forbidden.

JS: Well I have to tell you, in my opinion, when I’m having a bad day and there’s a guy on the street, a guy like you, and he says to me, “you’re like sugar” or goes like “ssss sss" (hissing noise), it makes me very upset. I’m not happy. It makes me very sad. because you are treating me like I’m a tree, or a water bottle, as if I’m not a human being.

A: I'm sorry. Don't get upset. I'm sorry, it was just an expression, and I didn't mean any harm. There are others who do things in a very different way, not like me. There are girls who if I exchange words, then we become friends.

A: Listen, I didn't expect you to talk back to me, so when you talked to me, I talked back.

JS: What did you think of me?

JS: But before I came back to talk to you, just because I’m a woman, you harassed me?

JS: How long have you been doing verbal harassment like this?

A: Look, there are nice ways — it's like flirting, there's good flirting and bad flirting.

JS: What do girls do when you harass them?

A: Girls? Real girls? The majority of them reply back, but there are others who don't say anything.

JS: What are you feeling when you verbally harass girls?

JS: If a guy did this to your sister, what would you do?

JS: What would your parents say if they knew you said to me, “You’re like sugar”?

A: Well if they knew, they would say, no, don't do this, it's like your sister, but they don't know! (LAUGH)

JS: Do you ever think about how your life would be different if you were a girl walking the streets of Cairo?

JS: Do you think that this verbal harassment is okay?

A: This is how we are. Our people are like this. It’s normal, it’s everyday. It's just talking, it's just flirtation. Like I said, there are different kinds, there is good flirtation and bad flirtation.

JS: In the Arab world, Egypt is famous for its sexual harassment, for the streets not being good for women. What do you think of this?

A: My opinion on what exactly?

JS: What do you think of the fact that Egypt is famous, Egyptian youth are famous for verbal sexual harassment?

A: All this because I flirted with you? We're not famous for this. There's politeness. I just like to do this, I like to say “you’re like sugar,” but I won’t do it anymore.

JS: Well, is there any thing else you want to say?

A: No, thank you. God keep you safe. Do you want anything else?

Here's an article in the Harvard Law Review by Cynthia Grant Bowman called "Street Harassment and the Informal Ghettoization of Women". It's about the US. Also, be sure to check out the work of Hannah Price, a photographer who is taking the portraits of the men who verbally harass her on the streets of Philadelphia.