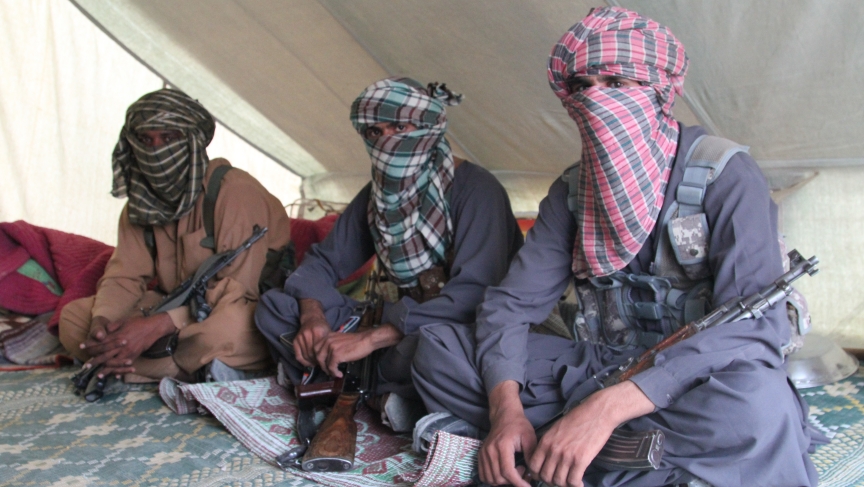 Baloch separatists, like these Balochistan Liberation Front fighters, are battling the Pakistani government for Balochistan's independence – and over who gets to distribute aid.

Mashky-Gajjar is one of the worst-hit areas in southern Balochistan's Awaran district and there, the Pakistan Army wrested control of rebel-held villages and their main medical camp, to make sure they got to be the ones who handed out relief.

Hidden under the rickety top of a make-shift hut, we’re not sure if we should stick our heads out to see what is happening, or continue to live under the illusion that we're safe as long as we cannot see the sky.

I am sitting with four Baloch women, one girl, and a little boy. Shells explode in the distance. All of us are in the dark on a bright Monday morning.

There is no reception on our phones, and we have no idea where anyone is. Some of the men left on motorcycles in the morning, escaping into the mountains. And my hosts are worried, for their families and of what would happen now.

I arrived in Mashky-Gajjar with the Pakistani relief group, Edhi Foundation. They’ve been ferrying patients between the earthquake-hit areas and hospitals in the nearest major city, Karachi. After the quake hit this part of Pakistan at the end of September, Edhi helped bury 183 bodies from Mashky-Gajjar alone. Weeks on, the villages still lie in ruins, with little relief in sight.

Much-needed aid has been delayed because of a war the state refuses to acknowledge. It's a war between the Pakistan army that moved in, and the Balochistan Liberation Front, or the BLF, that was already here. They're fighting over who gets to provide relief and medical supplies.

Ahsan Kamal, a political science lecturer at Quaid-e-Azam University in Islamabad, says the earthquake-hit areas have become a battleground for a much bigger issue: Who will win over the people in this forgotten corner of the country?

“In Balochistan right now you have the military at one hand trying to control who delivers aid and which agencies can operate in that region, whereas on the other side the separatist groups, they are also wanting to control the aid, deliver it themselves," Kamal says. "And so there's this kind of conflict on who gets to deliver aid.”

The provincial government in Balochistan has called a neutral international relief organization to step in.

The general secretary of the local separatist political party, Abdul Manan agrees. The UN, Red Cross and others need to enter and help. According to Manan however, the Pakistani state won't let that happen.

The army is seen by many here as the enemy, a perpetrator of human rights violations in the name of stamping out the Baloch rebellion. Kidnapping and torture have been well-documented by Amnesty International and Human Rights Watch. Professor Ahsan Kamal says the state is using the earthquake as an excuse to take control of the area.

Security forces say they’re only in the region to distribute relief.

Major General Mohammad Samrez Salik says more than 28,000 tons of food and 34,000 tents have been distributed in the hardest hit areas, including Mashky-Gajjar, and dismisses the need for any help from foreign relief groups. He admits there are problems delivering aid, but blames that on the rebel groups.

"There is also a caution because of certain lawlessness in this area which imposes further delay on our moves," Salik says. "But we are in all locations so far. The miscreants have tried to hinder our activities. They have also tried to coerce locals not to accept these supplies. In certain cases they have also tried to burn the supplies that were given to the locals."

But for 10-year-old Maria, who lives in a tent in Mashky-Gajjar, the major’s explanation doesn’t fit with her reality. She doesn’t believe the army is in her hometown to help.

“They have hurt us," she says. "They kill our people. They throw shells on our heads. They scare us children. We do not want army relief. We want them to go away.”

A harsh winter is not far off in Balochistan, and thousands continue to remain homeless.

My hosts in Mashky-Gajjar tell me that most people have left to find shelter with friends and family.

Those who remain behind have no idea when – or if – their houses will be rebuilt.